We're none the wiser as to why, exactly, the WA government believed it had a tawdry deal with the Commonwealth to rip off taxpayers -- or what the involvement of senior government figures was.

Attorney-General George Brandis’ extended self-defence of his role in the Bell group legislation scandal yesterday doesn’t get us particularly far in clarifying questions about the Western Australian government’s attempt to dud taxpayers, and the government’s role in encouraging them. Two major public interest questions remain, along with a serious political question.

First, why did the Western Australian government believe it had a done deal with the Commonwealth that the Bell legislation — which would have cost the Australian Tax Office $300 million in lost tax revenue, as the legislation put the ATO down the queue of creditors of the failed Bell Group — would not be challenged by the Commonwealth? “[T]he Commonwealth’s agreement was critical to the passage of the Bell Act,” WA Treasurer Mike Nahan said in WA Parliament in May. “We had a deal with the Commonwealth that it would not oppose the Bell Act. Despite the deal we thought we had, the Australian Taxation Office thought that it had to have its say in the High Court.”

Such a deal, if entered into by the Commonwealth, would have been a serious dereliction of duty by the government — especially given the Barnett government is politically aligned with the Coalition — giving up $300 million for a political mate. Why did Nahan think there was a deal? When he wrote to then-treasurer Joe Hockey in April 2015 following conversations between the two, he said: “I also trust that you would see no need for the Commonwealth to contest the legislation we plan to introduce into the West Australian Parliament.” Hockey, in his reply, doesn’t comment on this hope either positively or negatively. But according to Nahan, the Commonwealth had confirmed its support for the legislation. He had told WA Parliament in March:

“Let me make some comments about what we did before we agreed to introduce the bill. First, we contacted the commonwealth government and informed it. We contacted the then Assistant Minister to the Prime Minister, Hon Christian Porter, who knows a lot about this issue. He is a former Attorney General and Treasurer of Western Australia. We put together the draft bill. We showed it to him and we showed it to the commonwealth. We got a letter from the commonwealth saying that it supported the action. We would not have proceeded without that support.”

If there was no deal, why didn’t Hockey (or Porter) warn that the Commonwealth would contest the legislation? That would have saved a political ally — one that the both the Abbott and Turnbull governments have talked about engineering a special GST distribution deal to help out financially — the trouble of wasting time with legislation everyone should have known the High Court would overturn (as the Prime Minister observed yesterday)? Were Hockey and Porter merely tacitly encouraging Nahan despite having no intention of allowing the Bell Act to go unchallenged? And why did Nahan believe, as he also told Parliament in March, that Assistant Treasurer Kelly O’Dwyer didn’t want the ATO to intervene?

All of this remains unclear, despite the very serious nature of what Nahan believes happened.

The second issue is Brandis’ own position on the is sue. He claims he had no “involvement” in the matter — despite the interactions between Nahan, Hockey and Porter over the previous year — until 3 March this year, when Porter came to see him bearing a slide show and presentation from the West Australians, even though Porter at this stage is Social Services minister. Notice Brandis used the word “involvement” — which suggests he may have had knowledge of the issue, though he says it wasn’t until this point that he learnt of the Hockey-Nahan discussion.

But Brandis admitted that “my office had been dealing with the matter prior to that time”. Did they bother telling the boss? What was his office doing? Why were they “involved”? At whose instigation? It’s entirely possible, under Brandis’ account, that his office knew of the deal — or whatever it was — all along, but Brandis didn’t become “involved” until March 3.

There’s further confusion: after discussions with O’Dwyer and Second Tax Commissioner Andrew Mills, Brandis says on March 7 he reached the “firm conclusion that it was desirable that the ATO should intervene”, after canvassing with O’Dwyer and Mills the possibility of not doing so. So again, under Brandis’ own account, he may have sought to discourage intervention by the ATO — although the ATO, which is independent of the government, could have told him to get stuffed. Brandis then had a difference of opinion with then-solicitor-general Justin Gleeson over whether the Commonwealth should join the action, separately from the ATO. Gleeson thought the government should because of Corporations Law matters, and Brandis said: “I saw the force of what Mr Gleeson put to me”. This is, admittedly, the most plausible part of Brandis’ explanation.

The issue is whether Brandis raised the issue of the ATO not joining the action against the Bell Act and the Commonwealth not joining the ATO as part of some lawyerly desire to discuss all possible options or whether he actively and strongly argued for those approaches in order to look after the Western Australians. That, too, remains unclear.

[Why is Brandis in hot water this time?]

The third matter is one of government process. This was a matter pertaining to $300 million in revenue for the Commonwealth. As much as everyone would like to see the Jarndyce-like Bell litigation ended, $300 million is a serious amount of cash — raising the question of what authority Hockey had from Tony Abbott to take a position to the Western Australians. Had the matter been taken to cabinet, or was it the subject of correspondence with the prime minister? And when Brandis and O’Dwyer decided in April that the ATO would join the action, was Turnbull advised, given the legal, financial and political ramifications? Apparently not, judging by media reports that Turnbull demanded answers from Brandis when the West Australian broke the story, seemingly confirmed by Turnbull yesterday in Question Time when he referred to discussions that he was not a party to.

The failure of Brandis or O’Dwyer (or for that matter Porter) to alert the PM, either formally through cabinet or a ministerial letter or through contact with his office is, at least to this former public servant, remarkable. Perhaps standards have slipped in recent years, but the fate of $300 million and the overriding of state government legislation, particularly that of a political ally, and one with an ongoing discussion with the Commonwealth about its financial position, would have in previous years been the immediate subject of contact with the PMO at the very least, and probably a letter, from either Brandis or O’Dwyer with the other copied in. Failure to do so would have led to serious ramifications for the relevant ministerial chief of staff — even a sacking.

So why was Turnbull left out — and did his office know of Porter’s involvement?

Despite Brandis’ efforts to suggest there’s an innocent explanation for the whole affair, the long list of unanswered questions and contradictory claims suggests something altogether more tawdry. 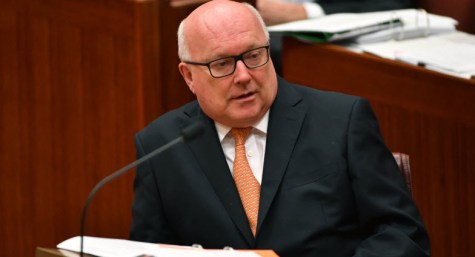 Brandis honestly thinks he is so clever that he can get away with ridiculous hair-splitting in his use of the word “involvement” which will end up (in his mind) being narrowly defined as “giving written directions” as opposed to merely having discussions or otherwise being aware of the issue.

This is the guy who maintains he “consulted” Gleeson on the legal services direction despite not actually discussing the direction with Gleeson in any way whatsoever.

This brings to mind the Hitchhikers Guide to the Galaxy bit about man being so chuffed about proving God does not exist that he then tries to prove black is white – before getting run over on a pedestrian crossing. Brandis will be exceptionally lucky to avoid the same fate.

Did Brandis also use the expression “no personal knowledge”?

That suggests that he had official knowledge. Time for freedom of information!

This is also the guy who doesn’t want journos (or the electorate) to see his diary appointments. Nothing suss about that, surely…?

More like the Ravenous Bug Bladder Beast of Trawl, so stupid that it think that if it can’t see you, then you can’t see it.
Only Mr Magoo thinks that he is being oh, ever so clever.
In the Senate today he brought up, yet again “my experience at the Bar”, when boldly going where no man has gone before, under the bus with his intended victim, alas in absentia.

“Give me the shovel George!” said Kelly the Rabbit.
“In my view, when I use a shovel,’ Humpty Dump-Me said, in rather a scornful tone, ‘it means just what I choose it to mean — neither more nor less.’

Other reports suggested that Brandis asked Gleeson not to pursue certain aspects of the case, which were obviously advantageous to the Tax Dept, with the clear aim of both making Gleeson complicit in not doing his job properly, and also seeking to place the Federal Government revenues down the drain to the tune of $300m.

Now, assuming those reports were correct, why isn’t this illegal in some way, some form of fraud or deception.

Why do we not have a Federal ICAC? Precisely because they might be very interested in a case such as this. I’m fairly certain that a public servant making decisions in this manner might find themselves in a lot of hot water, and perhaps looking at time in the big house.

And precisely why the likes of Brandis tells us we don’t need one:- “Because there’s nothing crook in Canberra – that smell’s the upwind flying pig farm .”

Bumble, Dec; 04 2016 – the Senate – on the “reasons” for the ASIO raids on Colleary’s (acting as East Timor lawyer in The Hague) office while cancelling the whistleblower’s visa (Dec 04 2016) :-
“In the protection of the Commonwealth and its people from espionage, sabotage, politically-motivated violence, attacks on Australia’s Defence system or acts of foreign interference and the protection of Australia’s territorial or border integrity from serious threats.”?

Well. It’s time for fun. 1. Bell and left facial paralysis equals Bells Palsy. Brandis gets a tick. 2. Long winded explanation that explains nothing in senate equals cerebral palsy. Brandis gets another tick. 3. Let’s move onto PSP or progressive supranuclear palsy and the symptoms are, not holding eye contact whilst talking, changes in insight, problem solving and judgement. Apathy is a symptom. Failure to make eye contact is a sign of disinterest. Brandis gets another tick. Bang the ticks and the other exhibits of symptoms together and one can only assume Disinterested George needs to see a quack.