Australia to get its first female chief justice

Kiefel's rise to the top legal job in the country has been long and tough.

The Prime Minister and Attorney-General announced this morning Australia would get its first female chief justice of the High Court, with Justice Susan Kiefel taking over from Justice Robert French. Kiefel’s rise to the top legal job in the country has been documented — she left school at 15 and studied law part time as she worked as a legal secretary. Kiefel’s promotion means that another place opens up on the bench, which will be taken by Justice James Edelman. At just 42, Edelman is not quite the youngest High Court judge (that would be Doc Evatt, who was 36), but he has had a meteoric rise so far. Edelman was sworn in to the Federal Court last year, and this speech by Law Council of Australia president Duncan McConnel details Edelman’s success in three separate criminal law appeals to the High Court. It also included this anecdote about just how dedicated the new justice is to his job: 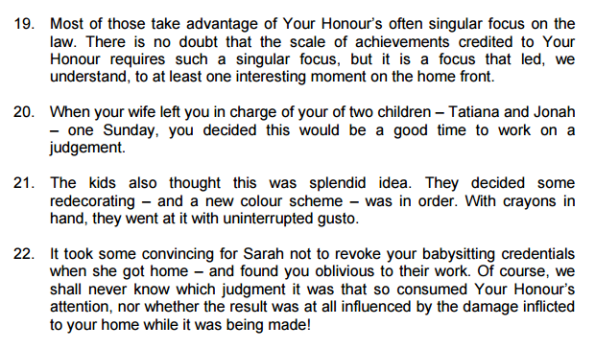 Better than online, TV in courts … under oath, the camera doesn’t lie

The fight for silks gets feisty

Thank you Malcolm. (Never thought I’d say that!). You’ve saved us from having the egregious and over weaning George Brandis on the high court. I breathe easier for that.