Government takes off pack, still has blisters. The government will be relieved that this morning it finally nailed down a compromise on the backpacker tax with One Nation at 15%, which, apart from that small matter of threatening Australia’s agricultural, horticultural and tourism industries, has been hanging like a, well, very heavy backpack around the government’s neck for most of the year. Poor Mathias Cormann, however, will have to adjust his rhetoric. Yesterday, he told Insiders:

“We have compromised as far as we can sensibly compromise, given that the budget bottom line cannot afford a further tax cut beyond what we have put on the table. We are focused on preserving our AAA credit rating and getting the budget back into surplus as soon as possible. If we were to provide a bigger tax cut to foreign workers, we would have to recoup that either by higher taxes on Australians or by deeper cuts on the spending side in Australia. We don’t believe that is appropriate.”

The Cormannator made the comments even as the government was floating speculation it would cut its losses and agree to One Nation’s proposed 15% rate, but at least he can say no one patched his software. And let’s not forget Barnaby Joyce’s contribution last week.

We await Labor’s “free money for backpackers” policy with interest.

Briggs batting above at Adelaide Oval. The Australians had a lot to celebrate at the cricket on the weekend (by putting in a respectable win after as series of embarrassing losses), and Ms Tips hears that former Coalition minister Jamie Briggs was getting right into the spirit of the day on Saturday. Briggs was spotted getting very loud and rowdy in the members’ lounge at Adelaide Oval. Since getting booted from the ministry after an incident in a Hong Kong bar, then losing his seat to the Nick Xenophon Team’s Rebekha Sharkie, Briggs has set up his own corporate advisory business, called Devonshire Advisory. No word on whether tea and scones were the only refreshment on offer.

Last Christmas, I gave you my vote … Pauline Hanson has got into the festive spirit, adorning her Parliament House office with a Christmas poster featuring a cartoon of herself and her One Nation colleagues. The poster reads “Merry Christmas” (No “Season’s Greetings” here) and includes Hanson herself in a sleigh with two flying kangaroos assisting her in delivering gifts. We get a bit of insight into her list of who’s been naughty or nice — Senators Brian Burston and Malcolm Roberts are dressed as elves, and Roberts is delivering coal to stockings labelled “Di Natale”, “Waters” and “Hanson Young”. Senator Rod Culleton has made it to the artwork, despite his tensions with his leader last week. He’s pictured driving a ute, and luckily for him, this one seems to have a key in the ignition. 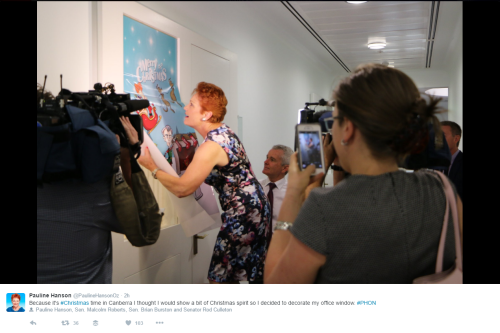 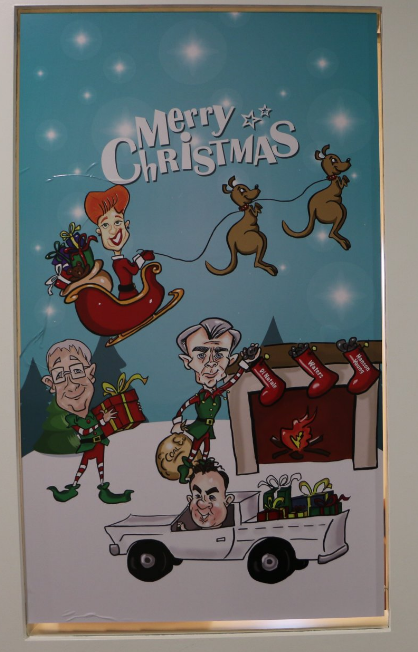