Ideas boom busts. The government’s four most expensive advertising campaigns for the 2015-16 financial year have been revealed, with the government’s National Innovation and Science Agenda as well as a campaign against domestic violence included in the list. In a letter from Special Minister of State Scott Ryan to a Senate estimates committee, the 2016 federal election and the campaign to inform people about new Senate voting rules were revealed as the most expensive at a cost of $43.3 million. The Defence Force also spent $31.4 million on recruitment advertising. Two areas of government policy also rounded out the list. The letter says $14.9 million was spent on the National Innovation and Science Agenda, which was launched not long after Malcolm Turnbull became prime minister.

The advertising program for the government’s innovation policies was originally set to cost $28 million, to spruik the $1.1 billion in “Ideas Boom” policies. So did the government tighten its belt in an act of fiscal responsibility? Or did the ads stop when it became clear the messaging was hurting, not helping, the government?

Music chain hits a sour note. Last week we reported that staff at the Allans Billy Hyde music chain had been told to stop using heating and air-conditioning in order to cut costs. Since then we have also been told that the business owes thousands of dollars of back-pay to hundreds of staff, after the business failed to keep up with the award wages for its workers. We are also told that three of the chain’s stores, in Underwood, Mermaid Beach and Parramatta, will be closing by the end of the year. Brian Kelly, the business’ commercial director, has not returned calls or emails from Crikey on these questions, although we are aware that staff have been warned about talking to the media. Staff have been told that back-pay will be paid by the end of the year. It’s unclear why there are issues at Allans Billy Hyde; the owner of the chain, Con Gallin, sold a development site in Melbourne’s sought after Fishermen’s Bend area for $7.5 million earlier this year. Gallin bought the chain in 2012 after it had gone into administration, reopening many stores. The chain currently has 10 stores nationwide.

Dasher bereft. In shocking news, Sharri Markson reports in The Daily Telegraph today that a food fight is brewing in Canberra over the decision by the Queens Terrace cafe in Parliament House not to offer Vegemite sandwiches. Markson quotes Labor Senator Sam Dastyari, in proof that the junior senator from NSW is struggling out of the spotlight, saying: “I’m an unhappy little Vegemite about this whole situation”. At least he’s not a happy little Vegemite in the Kevin Rudd sense of the phrase.

Don’t tell Fairfax, but everything’s not coming up roses. In his weekly Fairfax Media column Harold Mitchell, the former ad guru and now chair of Free TV Australia, went all upbeat. Under the headline “Forget Trump, the public are voting with their pockets” Mitchell is now an Australia bull:

“The Morgan research shows the overall picture of the Australian economy is healthy. She points to most indicators significantly improved on the same time last year. Inflation is down, GDP growth is up, the ASX 200 and Australian dollar are little changed and petrol prices are down. The ABS reports retail sales up 3.1 per cent in the year to September 2016. As for the fear that we will be overwhelmed by a Trump-inspired anti-globalisation wave, Michele [Levine of Roy Morgan] says a declining number of Australians agree with the statement ‘Globalisation brings more problems than it solves’. The figure was at 54 per cent, down from a high of more than 61 per cent in 2006 and also falling from 58 per cent in 2012.

“And people are shopping again. More retailers believe ‘the next 12 months is a good time to invest’; 66 per cent are of that view, well up from 58 per cent a year ago. Growth is also occurring in the leisure and entertainment sectors. Spending for the year has reached $77 billion, up from $69 billion last year. So the people are speaking with their spending. They seem to have grown tired of the negativity and put their hands in their pockets despite the predictions of a whole range of economic experts.”

Funny, then, that Mitchell either wasn’t told or didn’t realise that those solid retail sales figures — “up 3.1% in the year to September” — are actually a bit optimistic. The Bureau of Statistics trend figures show a rise of 2.8% in the year to September (the trend figures smooth out the volatility in the seasonally adjusted series and is therefore more accurate). And that is a very sharp slowdown from the 4% trend rate seen in the year to December 2015. That’s not to mention the most disturbing figure of the past few months — the weak 1.9% annual growth in wages in the September quarter’s Wage Price Index. Also apparently missing from his briefing was the worrying slowdown in new full-time jobs, and the rise in part-time work (which adds to the downward pressure on wages). Nor did his briefing apparently mention the black hole that is WA, the weaknesses in regional Queensland (outside the southeast of that state) and the sluggish performance of the South Australian and Northern Territory governments.

Chips and tubers. A caller to 3Aw today says that a major potato chip company is running out of potatoes and may struggle to fill shelves. Ms Tips is very concerned about the potential for a chip crisis right before the holiday season.

‘Tis the season to take selfies. Christmas is one month away, and in case you need an expensive gift for someone you really dislike, this exists. It’s a hispter nativity scene, including a selfie-taking Joseph and Mary, three wise delivery guys on segues, and organic farm animals eating gluten-free feed. 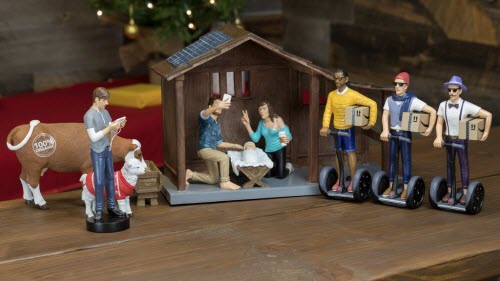 You did us Proudley Ray