Palmer in the House ... of backpackers and bastards ... ARIAs faux pas ...

Big cheeses enjoy some wine. When the numbers are tight in Parliament, it’s no surprise that the MPs and senators from smaller parties end up being very very popular. The crossbench end-of-year drinks in the Parliament House offices of Cathy McGowan and Adam Bandt last night was a truly bipartisan affair, attended by politicians of all persuasions, from government ministers including Christopher Pyne, Josh Frydenberg and Simon Birmingham to Labor MPs including Tanya Plibersek, Wayne Swan and Mark Dreyfus, as well as One Nation Senator Rod Culleton, fresh from his afternoon meeting with Pauline Hanson to patch things up.

The hallway between the two MPs’ offices were packed with staffers, lobbyists and lots of journos chowing down local beers, wines, cheeses and cakes from Melbourne, Albury-Wodonga and Tasmania.

The biggest shock of the night came when a man with white hair and a big belly dressed in red showed up about halfway through. But it wasn’t Santa, it was former member for Fairfax Clive Palmer, looking about half the man he was before. He insists his weight loss is all thanks to a diet company. He was spotted chatting away to Bob Katter, and camera crews were on hand to film the whole thing, which Ms Tips understands is for Annabel Crabb’s new show all about the inner workings of Parliament.

Of backpackers and bastards. While blame for the government’s bill to increase the passenger movement charge failing in the Senate last night ostensibly rests with Pauline Hanson and Brian Burston — the One Nation senators had agreed to support the bill (part of the government’s backpacker tax changes) but failed to show for the vote — in fact it was the result of Mathias Cormann being too smart by half. The government wanted its backpacker tax package bills moved into committee stage today in the Senate (when the Senate in effect turns into one giant committee to consider a bill in detail, and when amendments get moved), which requires they be “read a second time”. With adjournment looming, the government decided to wrap up second reading debate and get the bills read a second time, meaning they could go straight into committee on the bills today. But they forgot to tell Hanson and Burston, who failed to show up for the vote, meaning the question to read the passenger movement charge bill a second time was resolved in the negative, 31-30. Deputy Prime Minister Barnaby Joyce has accused Hanson and Busrton of “bastardry” over the mix-up. Now the government will have to try to have the vote recommitted today — that is, take a legislative Mulligan and run the vote again. Hopefully they’ll have their Senate ducks in a row this time.

Ho ho ho, new job. A caller to 6PR in Perth says that former defence minister Stephen Smith is training for a career change after his failed attempt to become leader of the WA Labor Party earlier this year. Apparently Smith was spotted at a “Father Christmas Training Course” and will make his debut in a red suit at a local shopping centre next week. His thick head of silver hair must have helped him accelerate a few units past the rest of the class.

Tango in Rio. Never mind the past, we are tap-dancing our way into the future, doing the cost-cut tango. Watch our feet fly and help us take attention away from that US$10.5 million mystery payment in Guinea in West Africa back in 2011 and those uncomfortable questions about who knew what and when. Rather than say more about that, Rio Tinto today is holding a big investor day briefing to reveal the strategy of new CEO J-S Jacques (as Rio describes him). It’s more of the same: cost cut, cost cut, jobs cut, jobs cut — all aimed at generating $5 billion of additional free cash flow over the next five years from a productivity drive unveiled today as part of its long-term strategy:

“In a presentation at an investor seminar in Sydney, Rio Tinto chief executive J-S Jacques underlined the strategy centred around a strong focus on safety, cash generation, a world-class portfolio, commitment to capital discipline and the delivery of superior shareholder returns.”

“Rio Tinto intends to raise productivity across its $50 billion portfolio of assets by focusing on operational excellence to generate superior shareholder returns through the cycle. This is expected to generate a total $5 billion of further free cash flow by the end of 2021 in addition to the cash cost reduction target of $2 billion across 2016 and 2017.”

Not a mention of 500 job cuts in WA in the run-up to Christmas, or the closure of one WA iron ore mine for two weeks over Christmas (despite Rio being able to ship every tonne of ore it can mine and sell it, at prices better than they though a year ago!). Rio has had productivity problems of its own making in WA with the new AutoHaul automated train system not working the way Rio reckoned it would. It’s another “look over here” after former Rio Tinto CEO Sam Walsh managed to dodge the waiting media at Crown Resorts in Perth on Tuesday waiting to ask him about his role in the US$10.5 million payment made to a “consultant” in connection with the company’s then-disputed Guinea iron ore project, Simandou. These tactics may work for a while, but not when the US Justice Department comes to call.

We can write what we want to write. Last night was the (highly political) ARIA Awards, and despite technical glitches it seemed to be a good night for all. John Farnham sang You’re the Voice, so really that’s all you need to know. But there was a spelling glitch in the name of award winner Sara Storer — when she finally won the gong for Best Country Album, her name was beamed around the venue with an added “H”. We weren’t going to sit in silence about this one. 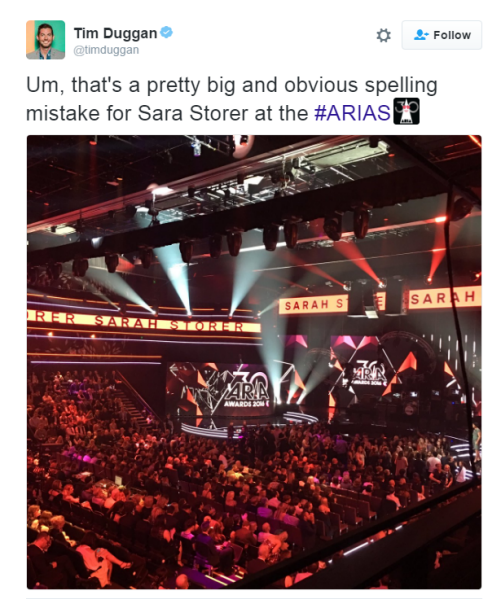 Now’s the time to secure Rio Tinto HQ for Australia