Why did Transfield get the contract to run the offshore detention center on Nauru when it had not even sent in an official proposal?

Emails obtained by Crikey show Immigration was so keen for Transfield to be given the contract to manage the Nauru offshore immigration detention centre back in 2012 that the department handed Transfield the proposal it had sent to rival company Serco.

In September, the Australian National Audit Office delivered a scathing report of the department’s handling of the contracts dating back to 2012, when the then-Labor government decided to reopen offshore detention centres to hold asylum seekers attempting to reach Australia by boat.

One particularly strange decision highlighted was Immigration setting aside a proposal from Serco for running garrison services on Nauru, and instead going with Transfield, which didn’t provide a proposal specifying the services to be delivered and a price (it ended up costing $351 million between 2012 and 2014 when Transfield actually tendered for the next contract). It all seemed to stem from an unsolicited email Transfield — now known as Broadspectrum — sent checking in on the whole process.

The first email — sent from an unnamed employee because Broadspectrum asked the department to redact the name from the released documents — shows how all the trouble kicked off for Immigration back in August 2012. 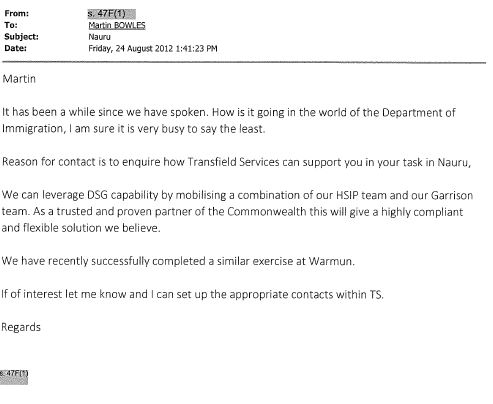 Bowles’ reply a week later on August 31 indicated that much of the discussion around how Transfield would get the lucrative contract was done verbally, and included the proposal the department had developed but shelved from Serco just days after it told Serco it would not be proceeding with its proposal. The paper indicates that any proposed cost for running the services on Manus or Nauru would not be fixed — i.e. Transfield would not be penalised for cost overruns. 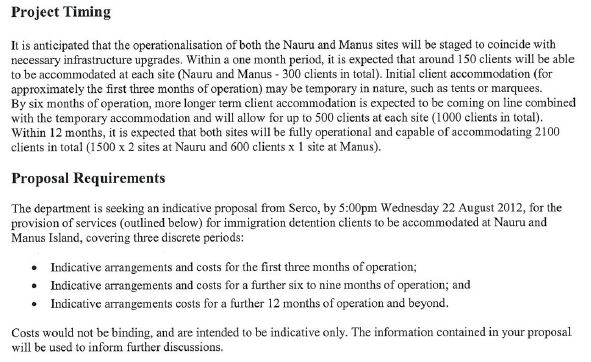 The department responded to ANAO’s concerns on breaking procurement rules stating that at the time of the reopening of Manus and Nauru it was operating in an environment that was “high-tempo, at the peak of national interest, and complicated through logistics and uncertainties involved in processing in foreign countries”, forcing the department to develop procurement policies that were “sufficiently agile” to cope with the demand. 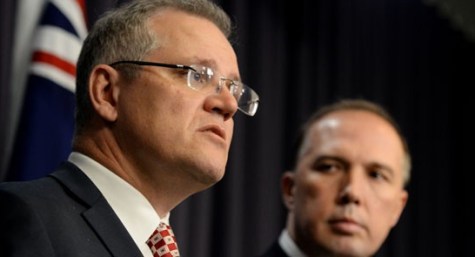 Outsourcing: the key weapon in the war against transparency

Transfield. Broadspectrum. Gotta love the obfuscation. Lucky they’ve got nothing to hide, or I’d really get suspicious.
Recently, members of the citizens’ jury for the SA nuclear waste dump noticed that the founder of the brains trust running the whole jury circus -New Democracy Foundation- is a managing director of Transfield Holdings Interestingly, Transfield Holdings website revealed that their business is entirely about the sort of work that a nuclear dump in SA would require – ports, infrastructure, power stations, railways….who’d have thought?? When certain individuals tried to draw this to the attention of jury members, the attempt was met with – shall we say, not a lot of enthusiasm. To put it very very mildly.
Which is not to say that there is even the remotest danger that somewhere 20 years down the line, the same interests involved in running the community consultation on the SA nuclear dump would have their hands up bidding for lucrative contracts (whether directly, or as we see here, indirectly). Just sayin’.

It amazes me, and not in a good way, how our attitudes have shifted in recent years. Not just do there appear to be limitless pools of money available for punitive programs, they have become easy to sell to the electorate. On the other hand, spending money on services that help people and which go a long way towards preventing them from even entering systems that punish them like legal services, prison rehabilitation programs, community services, youth programs, English language courses, migrant and refugee support, mental health facilities, etc all are seen as electoral poison.

TL;DR, we’re happy to punish people but not help them. We really have our priorities screwed up.

It seems rather ‘1984’ that asylum seekers should be referred to as ‘clients’. ‘Incacerants’ or ‘prisoners’ would have been more accurate terms.

..umm, would that be preferable to running business like a government? Especially this collection of wukfits.

The good thing is it got rid of Serco who are absolute low life. They leave people to die in prison vans in WA. Should never be allowed near anything. Who is the donor/crook here that allows Transfield to be able to do as it pleases?

Guardian 23/5/16
[See also Lince Del Bosque above.]
“The managing director of Transfield Holdings, Luca Belgiorno-Nettis, says his company made political donations because “it was fairly plain that that bought access” to politicians and created opportunities to influence events……said the prominent businessman, who has now renounced donations and founded the newDemocracy foundation.”
[More of interest in that article]
Luca inherited Transfield from his dad, a co-founder of the company.

Cheers for that, Shea. I give the man some credit at least for a bit of straight talking. I hate mealy-mouthed BS. BUT, does anyone really think that new Democracy Foundation took on the highly ambitious and contentious citizens’ jury job because it was interested in running an innovative, democratic talk fest about a nuclear repository for the SA public? Considering the sorts of commercial and business interests that sit behind new Democracy Foundation, can this project possibly be at arms-length and a neutral non-partisan one for these people? (Answer = no, it wasn’t, as conversations with jurors will tell you). I’m not even sure I’m pissed with new Democracy Foundation. My question is, who the hell in the State govt. did its due diligence, and who thought that getting this mob involved was a spiffing idea?
Asking the question of why the state govt. thought getting this mob involved was a good idea gives me a few grey hairs, so perhaps I’ll just mull on that one, while I await the inevitable episode of Four Corners…..