ABCC MIA. If you’re wondering what’s happening with the ABCC bill, the passage of which was supposed to provide a triumphant end of the year for the Turnbull government, it’s been pulled off the Senate agenda for this week. There’s no deal with the crossbench yet, apparently — and it seems like Barnaby Joyce’s welshing on his Murray-Darling Basin deal with South Australia, which has enraged Nick Xenophon, is the culprit. But there are four days next week for passage. Our tip is: expect an ABCC deal, but only after significant compromise. The government desperately wants those “massive win for Turnbull” headlines, meaningless as they are.

A podcast-only future is coming, but it’s not imminent. The Age has quietly deleted an “exclusive” story splashed online last night that Radio National staff “will likely cease to exist as an on-air transmission by 2020”. After publication, the ABC put out a statement strongly denying the substance of the story. “There are categorically no plans to end linear broadcasting on RN. We expect it to be a full linear service well beyond 2020.” The Age’s story was then updated to include this denial, before being taken down entirely by 9 this morning. At the time of publication, The Age hadn’t released an explanation about why this was.

The claim that Radio National was losing its radio transmission spot came from a meeting of Radio National staff yesterday. Ms Tips is told it was a large and fairly heated gathering beamed around the country through a video-link, and that some at the meeting came out with different impressions of what had occurred. And even more curiously, ABC sources told Crikey The Age’s reporter called head of spoken content Judith Whelan, until recently of the SMH, to discuss the story before publication — Whelan, we’re told, gave a strong denial, which wasn’t included in the story when published.

It’s undeniable the ABC has been talking about the cost of transmission, as Crikey has pointed out in several stories over the past few weeks. Radio boss Michael Mason said in an email to staff in October that the cost of transmission was a “major challenge” for the ABC. Podcast networks may be the future, but they’re a little further away than 2020. In fact, if a move off radio is in the future of Radio National, it’s unlikely to happen for over a decade — the ABC is locked into a long-term transmission contract with monopoly transmitter Broadcast Australia.

Pauline Hanson asks Culleton to please explain. One Nation leader Pauline Hanson took a novel approach to internal party politics, lecturing WA Senator Rod Culleton through an ABC camera lens. “Rod, excuse me, I’m party leader. I expect you to come to my office, right? It’s about being a team player, and that’s all I expect. I have respect from my other senators and I expect the same from Rod Culleton.” Watch it and you’ll feel guilty even though you did nothing wrong. 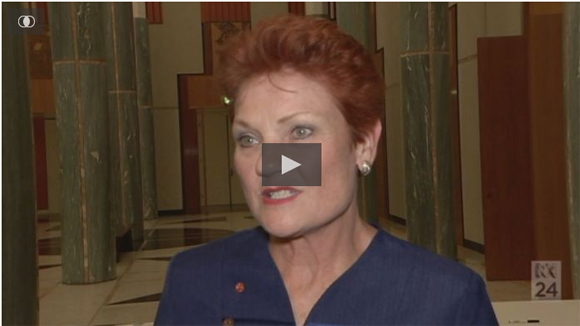 Delays in Centrelink payments? There were reports over the weekend that Nur Islam, the Rohingya asylum seeker accused of walking into a Springvale bank and setting himself alight on Friday, had experienced delays in receiving his Status Resolution Support Services (SRSS) payment, although Centrelink has denied that this is the case. A tipster tells us that delays in receiving the payment are common:

“I have seen numerous residents recently fall into arrears because of lengthy delays in SRSS payments. This has happened more over the past couple months and the residents affected have been without their pay for weeks at a time. They struggle for food, transport etc and Centrelink’s already stretched system has them wait for hours to even get an explanation or update.”

The payments of $433 are provided to people who are deemed eligible by the Department of Immigration and Border Protection, in what has been described as a “precarious existence”. The Department of Human Services has denied there are “significant delays or a backlog” in a statement to Crikey from a spokesperson. “Overall processing of Status Resolution Support Services payments is within the usual timeframes.”

“Some people may experience a delay in receiving their payment for a number of reasons, such as where a new customer doesn’t have their required proof of identity available at their first interview, resulting in a delay in finalising the claim. Existing customers may experience a delay for reasons such as incorrect or incomplete information, not reporting their earnings on time or not advising of changes in their circumstances.

“The Department of Immigration and Border Protection’s contracted service providers provide financial support to people who are transitioning onto the SRSS payment.”

Kelly changes his tune. Never say The Australian’s bloviating bore-at-large Paul Kelly can’t move quickly. Last week “the Labor Party’s decision to criticise and distance itself from Trump is an unwise and premature eruption.” (And who doesn’t hate premature eruption?). But today he opined about Trump and used phrases likes “devastating”, “a huge geo-strategic gift to China”, “strikes at the national interests of Australia”, “explosive”, “ignorant”, “selfish”, “as significant as the fall of the Berlin Wall in 1989”. So does that still mean Labor’s distancing from Trump was “premature”, Paul — or prescient? Actually, there’s little prescience required — you only have to have listened to what Trump has been saying for 18 months to know what a threat he is to the global economy and international order.

Hanson and her half-cooked dim sims.

Klewso, …Hanson is, a half cooked dim sim!