Rather than confront the threat of One Nation as previous generations of Nationals MPs did, they're caving in to it on issues like gun control.

With unerring timing, the conservative wing of the Coalition has delivered another blow to Malcolm Turnbull, but this time the cause isn’t mere mischief-making, but open panic within the ranks of the National Party at the rise of One Nation.

[Abbott and Turnbull take turns throwing the other under the bus]

The Nationals’ rebellion on a subject of acute sensitivity within the Coalition overshadowed the government’s success (bizarrely trumpeted as a “massive win”) in managing the passage of a bill cracking down on trade union governance, although the fate of its Australian Building and Construction Commission bill remains unclear. To further inflame matters, Nationals leader Barnaby Joyce endorsed his colleagues’ actions in rebelling this morning.

It comes just over a week after the Nationals’ vote collapsed in the NSW state seat of Orange, where a 30+% swing against the Nationals ekected a Shooters, Fishers and Farmers candidate. NSW Deputy Premier and Nationals leader Troy Grant resigned in the wake of the result. Coincidentally, federal Attorney-General George Brandis — in yet another addition to his glittering career of screw-ups — was revealed to have attacked his own Liberal National Party colleagues in Queensland and predicted One Nation “will win quite a few seats in the state election”.

[George Brandis and the struggle for competence]

The days of Tim Fischer bravely backing John Howard on gun control are long gone. The Nationals are terrified of One Nation and shifting to the far right in a panic.

In doing so, they are not merely humiliating Malcolm Turnbull but have detached themselves from one of the strongest bipartisan issues in Australian politics. Since the Port Arthur massacre, strict gun control has been a subject of national consensus, contested only by a few on the lunatic fringe of politics. Just 6% of voters think current laws are “too strong“, while 44% believe they should be strengthened further; another 45% believe they’re appropriately strict now. The Nationals are thus allying themselves with the 6%, not the 89%, and on an issue where weakening regulation has a real impact on lives lost to misuse of firearms — especially in rural communities.

The Nationals have already dragged the Liberals toward them: Barnaby Joyce’s hostility to Chinese investment has now been formalised into government policy, and a massive farmer handouts scheme, disguised as “concessional loans”, has been established by Joyce. Queensland LNP MP George Christensen, who sees himself as the de facto leader of the far-right rump on the backbench, wants more protectionism and a ban on all 457 visa workers. But on the evidence so far, the Nationals will have to shift a long way further over to the right to forestall the One Nation surge — or find a way to argue for the effectiveness of Liberal policies. 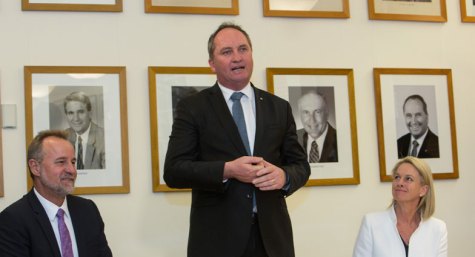 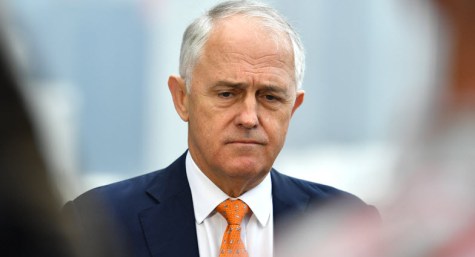 What are the states doing on this front? Ideally it’d just be classified the same license class as a pump action shotgun, which would put it beyond the reach of recreational shooters. The mechanism could be any shotgun with a capacity above 2, including chambered ammo. Then the feds could do whatever they wanted with the ban, if it were lifted there would be the state regulations to prohibit the vast majority of people from ever legally acquiring one.

To think the part of the electorate who voted for Malcolm Turnbull did so because the thought of Tony Abbott was too much to bear, only succeeded in opening the doors to Christian fundamentalism writ large. The ignorance, petty mindedness, and ill informed, sports obsessed stance of our present government will forever ensure Australia never lives up to its potential.

The race to the bottom continues unabated!

I wonder what the arguments are for importing a lever-action Adler shotgun, (as if I knew what that was.) I’m fairly clear that it’s hard to see why a repeat action shotgun is required anywhere in Australia, we aren’t the land of the free and home of the insane.

Poor Barnaby. He is going to be the last one left defending agrarian socialism against the dual threats of the Liberal right and the nationalist one nation because the ALP has well and truly left the bush.

The Adler is nothing but a cheap scattergun designed to excite a breed of shooters who spend more time in front of the telly than actually hunting. This is not a gun for any person who prides themselves in the humane and competent reduction of feral animals. And apart from being a close range anti-personnel weapon, this budget gun is good for nothing other vandalism. Disgraceful, incompetent and downright negligent politicians who are paid to know better.