An apartment supply surge is coming. The cranes looming above city centres bear testimony to it, as does the ABS data on building activity.

In the graph below, the resurgent black line shows the extent of the change. In March 2016, more work started on dwellings other than houses than on stand-alone houses. This is new. It has never been seen since the data was first collected, in 1955. 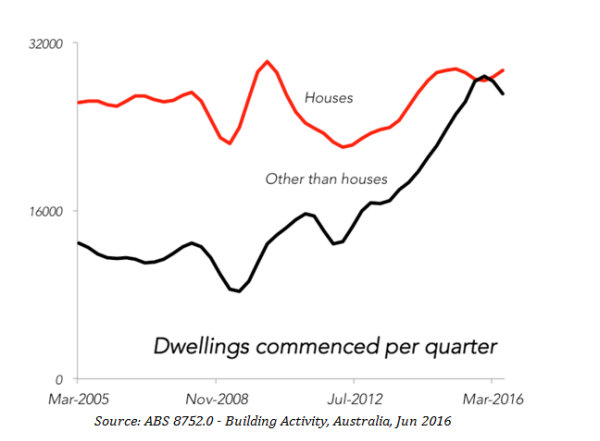 The rise in dwelling commencements is largely explained by a surge in apartments. Both the volume and type of housing that will become available in Australia is changing, fast.

This poses a new kind of risk.

The ABS has just released a research report on how long it takes to build various kinds of dwellings. It suggests that in the event of a house price dip, the momentum of the apartment sector will be tough to stop.

New houses can be built in about seven months. But apartments take closer to 18 months, as the following graphs show. 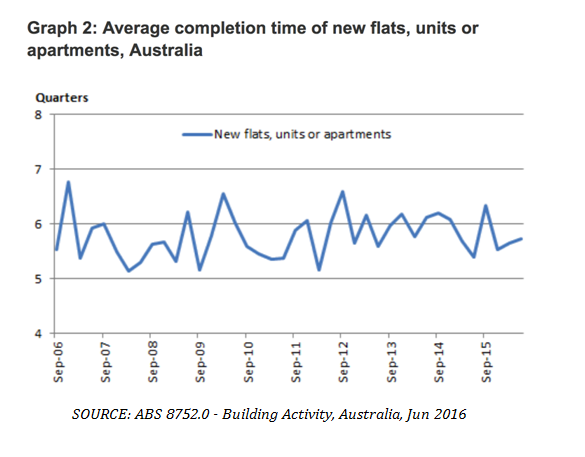 If the current crop of apartments hits the markets and causes a price slide, the market will be unable to react for well over a year. Larger projects could take even longer.

Apartment prices can fall a long time in a year. And even if prices are tumbling, the final touches will be being put on more and more apartments, to be released into a falling market.

The peculiar conditions attached to off-the-plan purchases could also accelerate any price fall. Lenders generally approve loans to buyers only when apartments are completed, based on a new judgement of the value of the property. Banks are less likely to lend to cover the agreed purchase price when the market price is substantially below that.

Anecdotal reports suggest this so-called settlement risk is already rising. The financial press even reports that a fund has been set up to buy whole apartment blocks expected to become available as soon as 2017.

Sluggish apartment builders in a falling market issue could be macro-economically important. The RBA’s head of Financial Stability, Luci Ellis, warned in March of assuming boom conditions would last forever:

“[J]ust as there’s a Greater Fool Theory of investment that helps perpetuate booms in prices of financial assets, it sometimes seems that there is a Slower Builder Theory of property development, where everyone knows that not all the projects underway will make money, but yours will if you can just complete it before the other guys complete theirs. This coordination failure can end in painful busts in building activity, because the boom went beyond underlying demand.”

Prices depend on both credit and supply of dwellings. The minutes of the latest RBA show it no longer has a bias toward rate cuts. Rate rises are on the agenda in the USA, and if unemployment continues to fall, the first rate rises could happen just as the supply surge hits the market.

In that case, the lack of ability to quickly put the brakes on supply might be the difference between a dip in prices and a crash. But Australia’s reaction time is likely to be slower than ever before.

High-rise developments … there are high risks, too 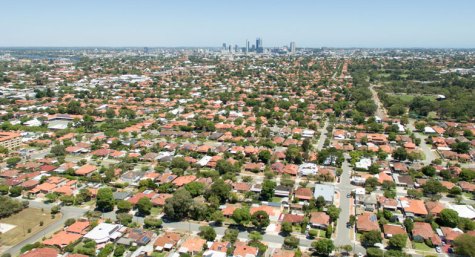 RBA has no idea just how the housing market works

The best thing that could happen is a substantial drop in prices of apartments, falling into a smaller drop in house prices, without a concomitant rise in unemployment and interest rates, and hopefully an end to the blind faith that ‘nobody ever loses money buying real estate.

The annoying side to this is that the tax department will help these investors in their losses just as they have with their gains. Double-dipping anyone?

Not sure if the fall in unemployment will assist the poor apartment building speculators too much. I was under the impression most of the employment growth was in part time work only, and that part of the fall in the unemployment rate was due to thousands giving up on trying to find work at all.

When the real estate crash comes (note I said when, not if- all bubbles pop) perhaps our government could break with tradition and bail out underwater home owners and let the banks and speculators drown?