You, too, can be Tony Abbott

A new RPG allows you to play the Member for Warringah.

Have you ever wanted to be Tony Abbott? No? Maybe you’ve wanted the chance to make his decisions though? You will soon have that chance with the release of the video game “Tony Abbott And The Quest For The Suppository Of Wisdom”. The game, made for PC, Mac and mobile, is an RPG (role-playing game). RPGs generally have well-defined, often elaborate, storylines and let players make decisions for the character they have adopted, allowing the player to take the game in different directions while they “level up” — instead of simply running around repetitively shooting things. In a YouTube tutorial of the game, Abbott ends up arguing with a BuzzFeed journalist. 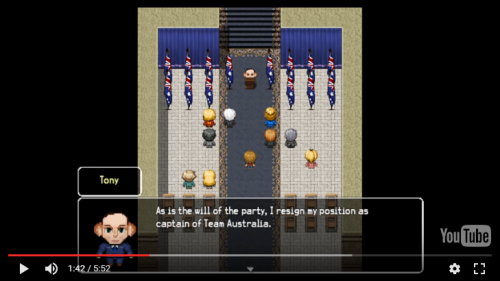 Would rather play an opioid-addled three-toed sloth attempting to avoid an 18 wheeler.