Melbourne University Press has apologised to a Credit Suisse businessman over part of Paddy Manning's biography of Malcolm Turnbull, Born to Rule.

Melbourne University Press and journalist Paddy Manning have issued an apology to businessman John O’Sullivan, of Credit Suisse, over mentions of O’Sullivan in the chapter on then-Treasury official Godwin Grech in Manning’s biography of Malcolm Turnbull, Born to Rule. The apology appears in newspapers today; defamation proceedings began in the Federal Court earlier this year. 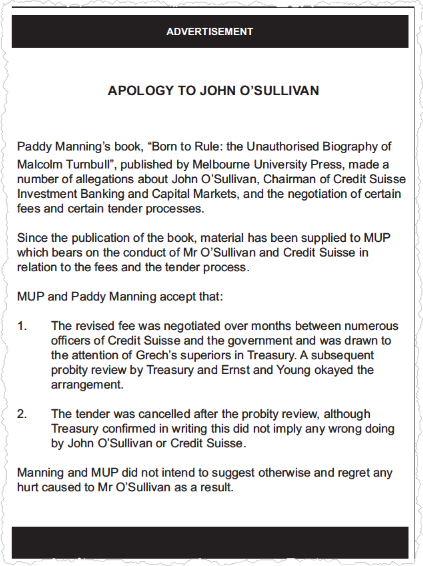 O’Sullivan, at that point the president of Malcolm Turnbull’s fundraising body the Wentworth Forum, had been in email contact with Grech, who was overseeing the Ozcar scheme used by Turnbull to pressure prime minister Kevin Rudd. The emails between O’Sullivan and Grech were released as part of the investigation into the ensuing scandal, and showed Grech making some comments about Credit Suisse performing services for Treasury. In one email, Grech wrote to O’Sullivan that he could change a contract signed off on by “Rudd and his hacks” to “reflect your preferred fee arrangement and push that through quickly next week” without running it past “Henry and co”, a reference to then-head of Treasury Ken Henry. Manning wrote that O’Sullivan replied: “Thanks Godwin. Sounds sensible.”

Of this correspondence, Manning wrote: “It was breathtaking, and it was amazing nobody landed in jail.”

But according to the apology, MUP now accepts, due to material supplied to it, that the fee structure was the work of many officers at Credit Suisse, and was drawn to the attention of Grech’s superiors. It was also approved in probity reviews by both Treasury and Ernst & Young, though the tender was subsequently cancelled — the apology reads: “Treasury confirmed in writing this did not imply any wrong-doing by John O’Sullivan or Credit Suisse.”

“Manning and MUP did not intend to suggest otherwise and regret any hurt caused to Mr O’Sullivan as a result,” the apology states.

In a statement to The Australian, O’Sullivan says “confidentiality obligations” prevented him from defending himself at the time:

“They and all the journalists who wrote on the issue at the time were misled by the selective, out of context and limited information publicly available at the time of these events … This was compounded by the fact that, at the time, I was unable to defend myself because of confidentiality obligations.”

“Once they discovered their mistake, they admitted it honestly and have corrected the record in a professional way.”

O’Sullivan says the apology completely vindicates his reputation, and that of Credit Suisse. He was represented by top defamation lawyer Mark O’Brien, and had Terry Tobin QC, another defo lawyer and the editor of Defamation Law and Practice, advising on the imputations.

Manning said he was unable to comment this morning. — Myriam Robin