The parties’ parties. It’s the most wonderful time of the year, which means it’s time to frock up and consider just how much booze is the right amount to consume in front of your boss. That means even our MPs get to let their hair down and party, with invites going out to the press gallery for various end-of-year shindigs.

Usually these events are for insiders only, but the Photoshop work on the invites is too special not to share. The party in Labor leader Bill Shorten’s office was communicated, of course, by a sneaky text message: 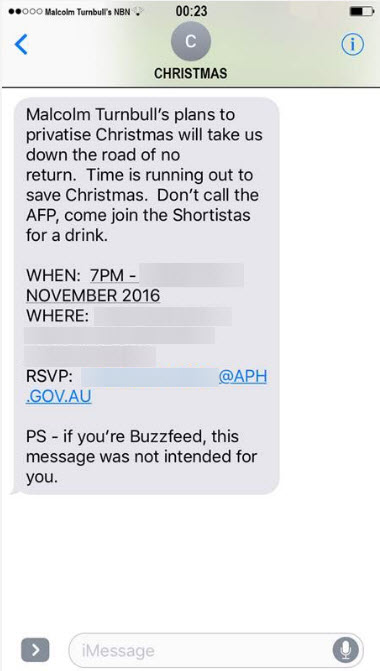 The PM’s party invite, of course, is very official and boring, although we’re sure the party itself won’t be: 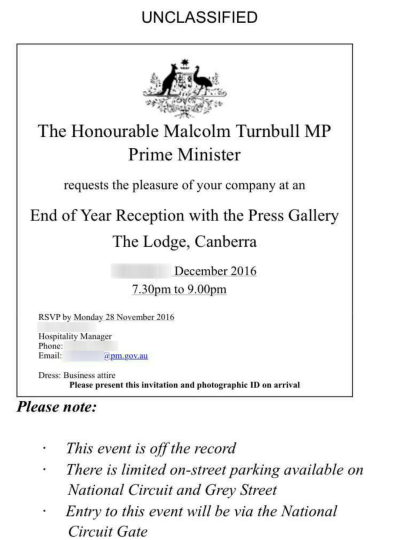 The invite to the Greens party is also pretty straightforward, but it was sent before the US election and includes the line:

“We watched Donald Trump come to the brink of the U.S. presidency (hopefully no further) and Beyonce and Jay-Z’s storybook marriage approach the brink of dissolution. If there is one thing on which I think we can all agree it is this: we could all use a drink.”

Awks. We imagine they need the whole bottle now.

The crossbenchers in the House of Representatives are also hosting a party, and this Photoshop job fills us all with Christmas cheer:

Bob Katter as the angel on the Christmas tree is an image we hope you never forget.

The nosh on offer also sounds great: “Come join us for some merry tipples & treats – ranging from the best our electorates across the country have to offer to what we can scramble together on the day – before we all head off over the Christmas break.”

Christmas party time also means time for Christmas spies. Got a tip or some goss from the dancefloor? Drop us a line, you can stay anonymous if you like.

The Shark is a little birdie for Trump. Sharri Markson has blasted her way onto the front page at her new gig at the Daily Tele, with the news that Prime Minister Malcolm Turnbull bypassed the Department of Foreign Affairs and Trade when Donald Trump was elected president, going straight to golfer Greg Norman. Apparently the Shark is a close friend of Trump’s and was able to pass on his personal mobile number to Aussie ambassador Joe Hockey — meaning Turnbull was just the second world leader to congratulate President-elect Trump. If you were wondering if Norman is a fan of Trump’s policies as well as his golf courses, an opinion piece in Newsweek gives a bit of insight. Norman writes:

“For the past eight years, the country has been in a state of uncertainty. One thing that really resonated was the push-back against the establishment. Donald, for all his bluster, rhetoric and aggressive style of messaging, caught the attention of those that needed a rudder for their forgotten ship and beliefs. Like it or not, he made a poignant and powerful impact on a base that sat sadly alienated.

“I personally had a sense of this and told Donald, when President Barack Obama was campaigning for Hillary Clinton 10 days before the election, that he was going to win. Obama’s messaging was wrong and just reinforced that those wanting change would get it with Clinton. In other words, the problem was not the problem—the attitude to the problem was the problem.”

“Trump will have to navigate global economic wars, cyber terrorism, the refugee crisis and so much more. The world is facing a critical time. I will say that I have spoken to the prime minister of Australia, Malcolm Turnbull, and he is onboard with wanting to see President-elect Trump succeed. I think and hope that is the position of most of the world’s leaders.

A lot can happen in a month. It was less than a month ago — October 18 to be precise — that the ABC’s new managing director, Michelle Guthrie, fronted Senate estimates. While there, she was asked about cuts to specialist programming, specifically at Radio National.

Her response? She said there were no plans for redundancies “at the moment”.

Two weeks later, the ABC announced it was axing Catalyst, at least as it stands now, with nine staff affected. And today, it announced seven roles at Radio National would be affected, with several programs going. So much for assurances to Senate estimates. And don’t think ABC staff haven’t noticed …

I guess, when Ms Guthrie said, “… we are not planning any redundancies on any particular programs at the moment … “, she meant that they were planning redundancies in general; which she then confirmed by saying that the “… programming strategy is not static …” and “… we will regularly review our program schedules …”. All of which was a long way of answering, ‘Yes,’ in a way that could be taken as, ‘No,’ so that she could avoid the discomfort of further and closer questioning. Shrewd but sad political manoeuvring.