Mike Baird has just lost two of his most promising cabinet members, and have been replaced by much less experienced members.

The two Nationals, widely acknowledged as the party’s brightest cabinet ministers, fell on their swords after last weekend’s catastrophic byelection loss at Orange in Western NSW.

But they were also sick of constant backstabbing by party room rivals and a virulent media campaign of “regime change” that targeted them.

Urged on by his own spin doctors, Baird wooed Murdoch’s Sydney tabloid, The Daily Telegraph, before and after the 2015 state election. Since then, the “Terror” has subjected him to front-page ridicule and blistering attacks, principally over the (now-delayed) ban on greyhound racing.

The departure of Grant and Piccoli cannot be separated from the role of commercial radio shock jocks Alan Jones and Ray Hadley who hold an inexplicable terror for politicians of all hues.

Jones, aka “The Parrot”, discovered the force of his political message when he took his program to Brisbane during the January 2015 state election to hound LNP premier Campbell Newman.

His success exceeded even his expectations: the LNP lost the election and Newman lost his seat in Parliament. Newman sued Jones for defamation but later withdrew the court action.

Treated like “new messiahs”, Jones and Hadley took their show to Orange on the eve of last weekend’s byelection to pour bile on the Nationals, the Coalition and Baird.

They gave precious airtime to the Shooters Party and its candidate Phil Donato, a police prosecutor, and he duly won with the biggest swing against a government-held seat ever recorded in Australian electoral history.

It was “overwhelming” and “fantastic” to receive Hadley’s endorsement, Donato said: “He’s undoubtedly one of the most popular radio announcers in the country.”

If Donato’s victory is confirmed by the NSW Electoral Commission he will become the first Shooters Party MP in the lower house. A rabid guns supporter and law and order hardliner, he will owe a debt of gratitude to Luke Foley’s NSW Labor, which donated all its preferences to his candidacy

Troy Grant’s successor as Nationals leader and Deputy Premier is Small Business, Skills and Regional Development Minister “John” Giovanni Domenic Barilaro, the Queanbeyan-based MP for Monaro, who is hoisted from last place in the cabinet to No. 2.

Barilaro and Blair are no replacements for Grant and Piccoli. The newcomers are lightweights without experience or political sophistication. In other words, the once workable Coalition leadership team has been derailed.

At the last state election, NSW Nationals increased their vote and won 18 of the 20 seats they contested. The Liberals lost 14 seats but this hasn’t stopped their right-wing faction demanding more cabinet positions at the expense of the seven Nationals in cabinet.

Grant’s departure significantly weakens Baird. The former police inspector was one of Baird’s most trusted advisers. As well being a reliable co-pilot Grant was the Premier’s tail-gunner, alerting him to the activities of opponents, inside and outside Parliament.

Factional divisions between conservatives and liberals are re-emerging in the ruling parties and rattled ministers are running scared of pollsters, consultants, vested interests and media ranters.

Although Baird is not a quitter, he must be wondering how long he wants to stick it out in the top job.

On the other hand, Luke Foley’s Opposition is relishing the Coalition’s slump and this week, and celebrated the arrival of two new MPs, Sophie Cotsis (Canterbury) and Paul Scully (Wollongong).

It’s one of the harshest laws of politics: while Baird can’t take a trick, all the luck is running Foley’s way. It’s probably true for Test cricket too. 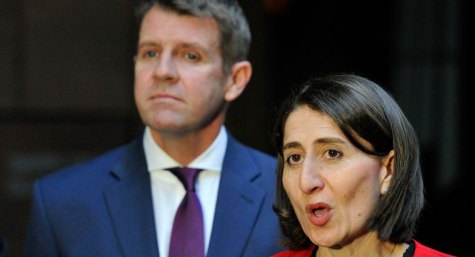 If Grant was such a trusted advisor and reliable co-pilot how did it end up this way for him?

The emperor’s doing The Dance of the Seven Veils?

Troy Grant was one of the better Nationals bosses, but his closeness to sell everything not tied down Mike, and the great greyhounds ban fiasco, saw him undone.

I just hope that Mike is voted out before before everything is outsourced to the much more expensive and less efficient private sector. Yep, I said that!

Dog’s Breakfast you are so right about Mr Baird’s propensity to flog off public assets, with all the due diligence of a good old garage sale
have another look what else has been put up for sale on “ebay”
http://www.illawarramercury.com.au/story/4296838/doctors-break-ranks-over-privatisation/