Contrarian climate campaigner Bjorn Lomborg failed in his bid to set up a branch of his Copenhagen Consensus Institute in Australia — despite the best efforts of the Abbott government — but he didn’t go home empty-handed.

While negotiations with universities to host the controversial institute were ongoing, the government made a commitment to fund $640,000 worth of the institute’s research into the Millennium Development Goals. That funding was delivered — free of the hurdles Australian academics have to go through to secure government funding. According to the very quiet announcement at the time (an Excel sheet of Education Dept grants for the period up to June 2016), the money went towards “evidence-based knowledge and advice to the Australian Government on the Smarter UN Post-2015 Development Goals project”. But what did the taxpayer really get? Well, a book. Specifically, The Nobel Laureates’ Guide To The Smartest Targets For The World, written by Lomborg and published by the Copenhagen Consensus Centre USA incorporated. Your correspondent paid $6.99 for the ebook on Amazon (on top of the mandatory contribution through her taxes, of course).

The 153-page book, which you can skim in about 30 minutes if you put your mind to it (it has a lot of lists), is a CliffNotes version of the research conducted by the Consensus Institute over more than a decade about the most effective ways to spend money if your aim is to reduce global poverty. The institute brings the same approach to the UN Millennium Development Goals as it does to climate change — which is that policymakers should use whatever policies offer the best value for money and not bother with those that don’t.

The approach has led to controversy, as it suggests the general impotence of government policy is a reason to do nothing to solve many pressing issues. At a Senate estimates hearing in October, Labor Senator Deborah O’Neill asked whether the book would be best described as “vanity publishing”, given it wasn’t peer-reviewed and was published by an institute headed by its author (the institute says the studies the book rests on are peer-reviewed). She questioned what exactly the taxpayer had gotten for its buck with a book that advocated doing nothing on many worthy causes:

“People might be a little surprised to discover that some of their taxpayer dollars have gone to this book, which opposes investment in the following things: disaster relief for the global poor. That is what this book is doing. It opposes increased life satisfaction for people in poverty. It opposes reductions in air pollution … It opposes employment for all. It opposes biodiversity protection. It opposes reducing child marriage.”

The research by the Consensus Institute involved getting panels of the world’s academic economists to look at existing studies and come up with rough valuations of the effectiveness in dollar returns of various types of poverty-reduction goals. The Nobel Laureates in the title are seven past winners of the Nobel Memorial Prize in Economic Sciences.

On the Desmog website, environmental journalist Graham Readfearn — a critic of Lomborg — notes that not all the laureates who gave the book its name could be said to have had a large contribution. Robert Fogel, who died three years ago, only participated in one of the centre’s projects in 2004. Another two of the Laureates only had input into one of the studies through participation on the expert panel. That leaves four with more significant contributions. A generous analysis would conclude there is now another Nobel laureate who likes the book: Colombian President Juan Manuel Santos, who won the Peace Prize this year, has referred to the book’s findings on best-value biodiversity goals in speeches, the institute says.

But maybe that’s just quibbling about marketing. Most of the book is grouped around different types of policies, generally with a two- to three-page introduction by Lomborg followed by a list of the relative returns on various types of policies. Every one of the UN’s 169 policy targets are evaluated in the book for their effectiveness — which often means a general discussion of the policy area followed by a dollar figure on individual policies. The book is copiously cross-referenced to other publications on the Consensus Institute website. 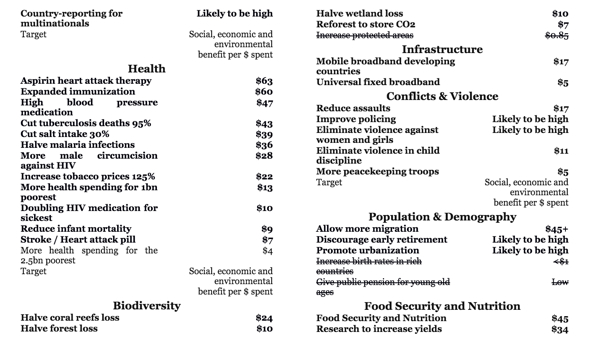 A lot of the book looks like this (things crossed out are bad priorities, things bolded yield good returns)

This is no page-turner. The Nobel Laureates’ Guide To The Smartest Targets For The World is not particularly fun reading, and it’s hard to see the book getting an audience wider than those who make policy for a living. Even though the institute gathers media coverage as a key marker of success, almost all mentions of it are in op-ed pieces written by Lomborg himself. It has garnered no independent reviews, according to searches on Factiva and Google. Though the institute’s underlying research on the UN development Goals was mentioned in quite a few articles in 2014.

The book was actually published before Australia handed over your money to Lomborg. The institute’s spokesman David Lessmann told Crikey the Australian grant was part of a larger funding round that included the UK’s Department of International Development, American charity the New Venture Foundation and Google, and went towards funding research into the aid priorities of individual nations like India, a series of youth forums that asked young people what their funding priorities were, and into public relations — organising articles and contact with journalists in 89 countries. Oh, and into physically producing the book — the Australian government contributed US$7800 ($10,227) for printing and postage.

“The book was just one of the tools to get the prioritization information into the hands of many top decision makers,” Lessmann said. “In total, more than 1100 pages of research were written for this project, providing cost-benefit analysis for many of the development targets identified during the SDG process and identifying the 19 most cost-effective investment recommendations. Cambridge University Press is in the process of publishing a full academic book with all the final versions of the research papers and analyses. It will include a foreword from the chief economist of the UK development agency, DfID, and the chief economist of the US development agency, USAID.”

After all Australia has contributed to the project, one hopes the Parliamentary Library gets a free copy.

Myriam, you shouldn’t have.

You are a brave soul.

Those dollar investment tables are nothing less than bollocks anyway, so a truly worthless book discussion worthless studies. Great!

“…The 153-page book, which you can skim in about 30 minutes if you put your mind to it (it has a lot of lists), is a CliffNotes version of the research conducted by the Consensus Institute over more than a decade…”

This isn’t ‘research’ into anything – in the real world what Lomberg has apparently produced is a review article – and one that wouldn’t BE published anywhere authoritative, since it only refers to his own ‘work’.
Honestly – this sort of government waste is infuriating.

By the way… since when was “Likely to be high” a measurement of anything???

$640,000 to a swindler plus another $10277 for postage and printing for an already published book? Can’t beat the Coalition when it comes to graft.