The cat has more than one tie, with a Fairfax journo tweeting that it has also been seen in a blue tie.

As the media outside the Ecuadorean embassy wait while WikiLeaks leader Julian Assange is questioned by Swedish chief prosecutor Ingrid Isgren, they have been treated to a view of another member of the embassy’s household. A cat has regularly appeared in the window of the embassy where the media waits for photos of Isgren, or even of Assange himself. We are unsure of the cat’s name, but its existence has been well documented by Fairfax correspondent Nick Miller. First the cat appeared to check out what the fuss was all about: 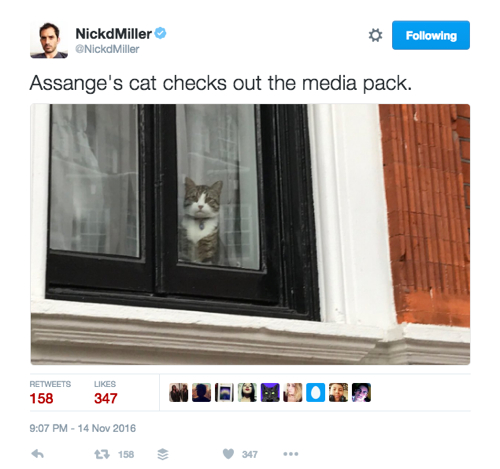 Then protesters decided to try and get in on the cat’s fame: 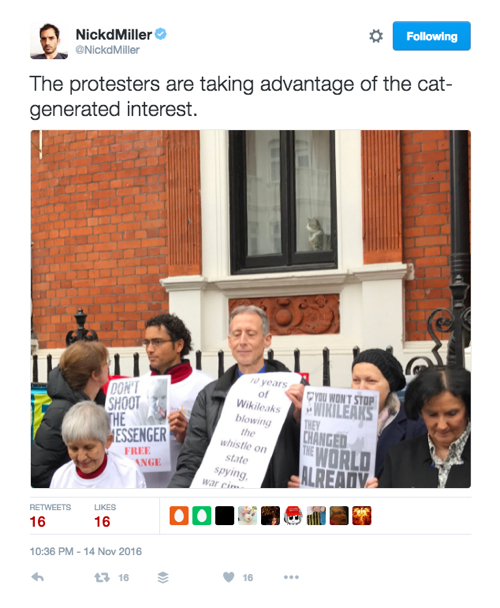 With all the attention, the moggy decided it was time to up the fashion stakes: 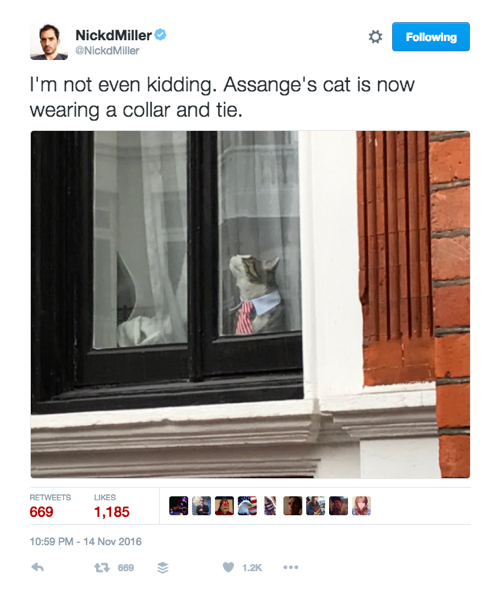 The cat has more than one tie, with Miller tweeting that it has also been seen in a blue tie.

Twitter and Instagram accounts exist with the name “Embassy cat”, but it’s unclear if they are operated by Julian Assange himself (although he does feature in many of the photos) or if that is the feline’s actual name.

I am appalled at the low standard of investigative journalism currently on offer in Crikey.
It is Julian Assange’s cat.
A quick look at a “first they came for Assange” tshirt would have made recognition of said cat instantaneous but no! Crikey couldn’t be bothered fact checking. Instead it is indulging in discussion of the cat’s attire.
Shame! Crikey, shame!

“Mystery cat”, says the headine, but Crikey goes on to display photos of a moggy clearly captioned “Assange’s cat”.

Can we see the cat in a blue tie too, please 🙂