What's an elite? What do they believe? Why are they so terrible? All these questions and more are now on Malcolm Turnbull's agenda.

Finally, David Flint has been defeated. And by, of all people, the arch-republican Malcolm Turnbull.

For a long time, Flint held the title of Australia’s most egregious user of the word “elite”. In fact, he didn’t just use it — in 2003 he wrote a whole damn book about how the elites in media and politics were rightly copping it from a victorious John Howard, with Flint delivering a fiery send-off to these out-of-touch clowns. Flint, the foppish arch-monarchist, law professor and reactionary, was head of the Australian Broadcasting Authority at the time, before his correspondence with Alan Jones came to light and he resigned. But for all his privilege, connections and role as head of Australia’s media regulator, apparently, he wasn’t one of the dreaded elites. It was so laughable even Gerard Henderson mocked him.

But after 13 undisputed years as master of misuse of the term, Flint’s reign is over. On Monday night Malcolm Turnbull was giving repeated serves to “media elites” while talking to what he thought was one of them, the ABC.

“Elite” hasn’t featured very strongly in Turnbull’s vocabulary as Prime Minister. He’s usually reserved it as a term of praise for “elite athletes” or elite security forces. But out it popped three times Monday night. And none of the usages were terms of praise. So Turnbull, educated at Grammar, Sydney Uni and Brasenose College Oxford, former journalist, barrister, investment banker, millionaire many times over, married into one of Australia’s most famous establishment families, resident of a harbourside mansion, Liberal Party Prime Minister … not part of the elite then?

Being elite, when it comes to sport, or national security, or the military, is naturally fine — but being part of the elite is not. And it’s not just Turnbull — if anything, he’s playing catch up. You won’t find anyone admitting to being part of the elite. It’s a peculiar flipside to our national preference for the underdog. So we have to identify elites to each other — to call them out, to use modern parlance. But oddly, it’s usually people who look an awful lot like elites who are complaining about elites. Flint and Turnbull are only the most egregious examples. The media outlets of News Corp — the most powerful media company in the world and still extraordinarily influential in Australian politics — are happy to identify people with whom they disagree (almost invariably on the left) as “elite”, however actually powerless they might be. Boris Johnson — Eton and Balliol, Oxford — attacked elites in the Brexit campaign. Attacking elites was central to the campaign of Trump, real estate tycoon and friend of much of the US elite — including, until recently, the Clintons, on whom he used to lavish praise.

The term “elite” is useful because it comes with its own package of meaning. While it’s good to be elite at sport — we lavish millions of dollars on “elite athletes” after all — in a social, media and political context it means out-of-touch, lacking the authentic experience of ordinary people, possessed of ideas that “don’t pass the pub test”, too taken with theory and not enough with practice. Being elite is being soft, having an easy life, while ordinary people do it tough on Struggle Street.

But what exactly do elites believe? A bit like “class warfare”, another term bandied about by the right, it’s not exactly clear. Turnbull’s response to a question on section 18C of the Racial Discrimination Act was instructive: he attacked the “elite media” like the ABC for focusing on 18C when he was focused on the economy — by implication, a subject of far greater interest to ordinary dinky-di salt-of-the-earth cobbers out there in Real Australia. It was a silly lie, of course — he was the one who said there was a “lively debate” about 18C and called an inquiry to placate his far-right colleagues. But more to the point, if you asked those far-right colleagues (old white male senators, who by any definition are most definitely part of the elite), they’d tell you that it was the fact that 18C had been imposed by “the elites” as part of a left-wing plot to destroy free speech that was the problem — and one in urgent need of a solution.

The result, then, is Schrodinger’s Elitism — where a subject can be simultaneously an elite plot to stifle debate and a distraction from the real issues. But such oxymorons are hard to avoid when discussing elitism. Detached from specific issues, the charge seems to be that certain groups — urban, not lower-income but not wealthy either (it’s OK to be financially elite, too), not engaged in manual labour but probably in services industries, possessed of liberal-minded values — are out of touch with the concerns of authentic, lower-income, suburban or regional voters, who possess a wisdom born of practicality, earthy good sense and long hours of hard yakka.

The juxtaposition doesn’t stand much contact with reality. Hillary Clinton easily won more votes than Trump — does that mean more Americans share her elite values, and those of the mainstream media who couldn’t abide Trumpism? Indeed, claims about those terrible elites tend to disappear when progressive parties win elections, almost as if conservatives prefer to keep quiet about that whole “wisdom of the masses” thing when the masses elect progressives.

Moreover, it ignores the intellectual history behind the competing ideas. There’s nothing easy, lazy or theoretical about “elite” ideas around mutual respect, non-discrimination and human rights. They’re actually the product of centuries, if not millennia, of slow progress in understanding humans function most successfully in societies where instinctive fear of “the Other” — non-family, non-tribe, foreigner, female, gay, heretic, disabled — is mitigated by structures and customs that enable co-operation and collaboration. Bigotry and resentment of the Other (whichever Other is on today’s political menu) is the easy way out, not some product of working class common sense. Nationalism and nativism instead have become useful tools to divide low-income earners and keep mutual victims of the same capitalist system at each other’s throats. The Democrats did it for a century in the southern US; the Republicans have been doing it since the 1960s. Have wise, how salt-of-the-earth smart is it to fall for the same old trick yet again, this time dressed up in orange skin?

Ditto with economic policies. Free trade and anti-protectionism are counter-intuitive. But experience and hard lessons have shown they work better than trying to shut ourselves off from the world in fear of competition. Rather than being some out-of-touch theoretical stupidity only believed by latte-sipping urbanites, many elite values are the result of centuries of people being willing to not take the easy way out, but look behind the obvious in favour of what might actually improve lives.

But now we’re all anti-elitist. Especially the most powerful elites of all. 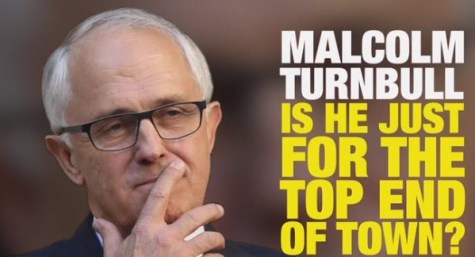 Labor gets down in the gutter, where there’s plenty of company 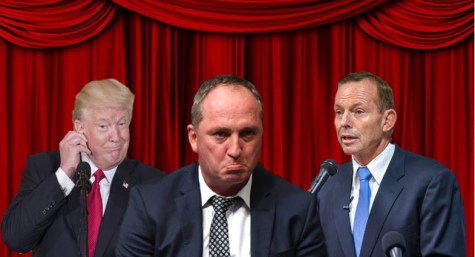 We are not the elites you are looking for.

Love your work Mr Wombat. Meme of the decade.

“Being elite means being able to play the hoi polloi off against each other.”

It’s a bit depressing to see right wing media resort to these bizarre ad hominem depictions rather than actually engage in ideas. But it’s music to the ears of the far-right. Speaking in such terms is a way of reassuring them that you secretly share their prejudices.

I wonder how long it is before “Un-Australian” makes a comeback?

Elites is just a tag used to demonise the left by the right. My question is why do low income people attack people on the left for being out of touch when they are actually being robbed by the financial elites who don’t pay their taxes to give them a ‘leg-up’ through subsidised health and education.

The capacity for people to actively work against their own interests seems to be infinite ATM.

Because they have been taught those people got there through very hard work and superior intelligence. We live in a just society where we all rise according to our merits, Karen.

In the specific case of the current left spokespeople, many of them are out of touch.

They are just as convinced of their own merit and superior intelligence as their counterparts on the right. This shows up in their preoccupation with identity politics and silence on economic inequality. Not to mention their insistence that education heals all social ills. “The poor working class” – they opine -” if only they weren’t so ignorant. If only they’d get an education. Racism, sexism and welfare dependency-ism would all end and they’d all get good jobs in the meritocracy, just like us.”

The end is result is kids needing a Cert 3 in Retail to work a checkout at Coles on $4 bucks an hour, but hey! the meritocracy are right: education cures EVERYTHING, doesn’t it?

Not enough jobs to go round? Um…

“What the poor working class needs is more education. It’s a supply problem – a question of their ignorance. If they only got an education, they’d all get good jobs in the meritocracy. We live in a just society. All rise according to their merits.”