To be fair, with Donald Trump seriously being elected to the US presidency, it can be hard to know what's real these days.

The Age has become the latest victim of a spoof British soccer account, which makes a habit of tweeting outrageous yet catchy crowd chants in a bid to fool the media.

The paper yesterday removed a story written by a staff journalist for page 6 of Thursday’s paper, after it emerged that a key quote in the piece had in fact been first tweeted by a fake British parody account.

The piece, which was on the racial underpinnings of Trump’s victory, halfway through referenced “reports” that said there were thousands of Trump supporters outside Trump Tower in New York, shouting: “We hate Muslims, we hate blacks, we want our great country back.”

The claim comes from Simon Rowntree, whose plausible-looking Twitter account has since been suspended. On election night, he tweeted what he claimed was a first-hand account of what was happening in Manhattan. But “Rowntree” (he’s not a real person) has a bit of a specialty making up offensive chants by rowdy football fans in the UK. And it’s far from the first time he’s managed to get news organisations to pick up his fake first-hand accounts. Outlets like The Sun and Russia Today have been previous victims.

The Age’s editor-in-chief Mark Forbes told Crikey he’d only been made aware of the error last night. “As soon as I was alerted, I pulled the story down whilst we investigated.” He said this morning that a correction would go up, and a note would be issued to staff about the verification of this type of thing. “It’s definitely not good enough,” he said, expressing disappointment it hadn’t been picked up before publication and adding that given the sheer amount of fake news to be written about the US election it’s something The Age should have been very wary of. 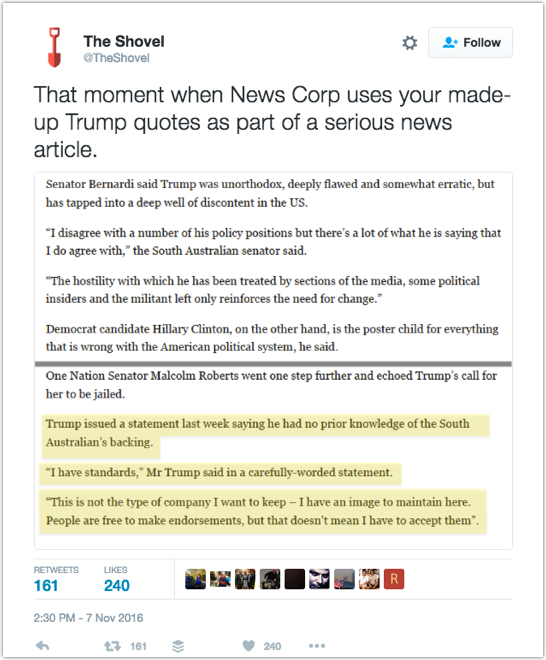 Earlier this week at News Corp, a fake Trump statement composed by satirical website The Shovel (in which he dissed Cory Bernardi) made its way to the Herald Sun and Courier-Mail, as The Guardian has reported. — Myriam Robin

Fairfax will divert Age readers to the SMH during Melbourne Cup

Where do these clowns get off – making fools of the media? That’s the media’s job.

Note to news outlets: there was once a skill called ‘investigating and reporting’. It did not entail trawling the internet for commentary or crap from dubious sources. Frequently, the reporting involved actual eye witnesses or even the journalists themselves, imagine! They described scenes and events with credible background.

Yes, it sounds bizarre (not to mention hard work) but this was how many of the current media giants germinated & operated for decades. Quaint, eh?

I have little, buggrit NO, sympathy – journos. for the last couple of decades have dutifully and with full malice aforethought, transcribed the most blatant lies & bullshit in the thrall of the bosses for big salaries.
Now that they are grown few in number and required to fill the ever more voracious maw & empty acreages of “news” aggregators, how & why should anything better be expected?