Labor lawyers’ precious artefact. The NSW Society of Labor Lawyers is celebrating five years of existence this month with a fancy dinner to be held after the group’s AGM next Thursday. A tipster tells us that along with a speech by shadow attorney-general Mark Dreyfus, the society is auctioning off a book with some important names written in it:

“The Society possesses a rare piece of Australian legal-political history. A book inscribed by George Brandis addressed to Sir John Kerr. The inscription is below. The book will be auctioned off at the Society’s anniversary dinner on Thursday 17 November.

What is the book? You will need to buy a ticket to find out.” 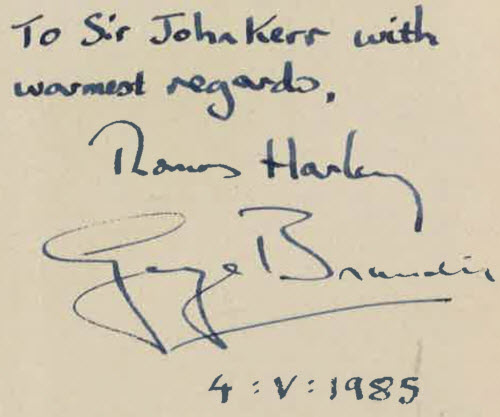 We can’t wait to find out what the book is.

Make the Russians pay for it. While our constitutional prohibition on MPs and senators from having a financial relationship with the Commonwealth has received much attention lately, it’s a good thing for one MP that there’s no constitutional problem with having a financial relationship with another government. Western Australian Liberal MP Rick Wilson has just updated his pecuniary interests entry and reveals he now has an investment property in Canberra. Half his luck — and even better, he has a good, safe tenant there, the Russian Embassy, although there would be the problem of all those other embassies, and our intelligence services, trying to plant bugs all over your rental property.

Joe, you can stay. Many Americans have joked that they will be moving away from the United States after the election of Donald Trump to the presidency, and some have taken it further than a joke, after the Canadian immigration website crashed and New Zealand also reported high interest from Americans. Here in Australia, AFL footballer Mason Cox (who is from the US) tweeted that he was becoming an Australian citizen. He also added an offer to US Vice-President Joe Biden for a “pullout couch”. When Biden visited Australia earlier this year, Cox was his guide as he attended a footy match.

Election parties turn to wakes. Rowdy uni students were thrown out of the University of Sydney’s Manning Bar yesterday afternoon after shouting endorsements for some of Trump’s more distasteful statements (“Grab them by the pussy, that’s how we do it”, as well as anti-Muslim chants) as the results started showing the Republican’s surge.

But Crikey‘s spy at the gathering tells Ms Tips it was all a bit of a storm in a teacup. She was there attending the University’s United States Study Centre’s private party, co-hosted with CNN, in a roped-off part of the room and reckons the trouble all started when some of the students in the public area of the bar, there for a Sydney Uni Politics society event with a largely pro-Clinton crowd, realised the cameras were rolling. “Every time the camera came on them, they’d act up, and then when the camera went away, they’d shut up again. They were quite polite when the cameras were off, talking about their law courses and all that.” After a bit of media attention, the university had security throw them out and issued a statement about “inappropriate behaviour”. Aside from the uproar over the ejected students, the party wasn’t much fun. “Everyone was so despondent they could hardly speak.”

Another party that fizzed, according to a tipster, was one held for Mamamia readers. We are told the party was hoping and expecting to be a victory party for Hillary Clinton but it quickly turned sour when it was realised that wouldn’t be the case. Mia Freedman has been a vocal supporter of Clinton’s, and we hear that all the speeches and content that had been prepared for victory couldn’t be used. “Everyone had a few drinks and commiserated,” we are told.

Not far from Sydney Uni at the Rugby Club just off Pitt Street, another gathering had a decidedly more festive atmosphere. A rag-tag group of political has-beens (Mark Latham, Bronwyn Bishop, Ross Cameron) and punters, gathered by Cameron at the Trump’s Aussie Mates party, got steadily rowdier. Cries of “Trump, Trump, Trump!” and “Lock her up!” made their now-customary appearances. Attendees seemed to be competing about who could say the crudest thing to show the journalists present the Trump spirit.

Meanwhile at Australia’s US consulates, it was tight security and a cautious mood as everyone settled in to watch. In Canberra, everyone wore a suit. Well before the result was known, but when it was clear Trump was pulling away, the embassy events being held in Sydney, Melbourne, Canberra and Western Australia announced the results of their own mock polls of attendees. It was a landslide for Hillary, with more than 80% of attendees choosing Clinton. Perhaps unsurprisingly, the US Consulate in Melbourne, in Greens MP Adam Bandt’s electorate, had the largest margin for Clinton. It also had the most write-ins for Bernie Sanders.

Bronwyn’s back. Former speaker Bronwyn Bishop was spotted at Ross Cameron’s do for Trump supporters yesterday, and she was in the nation’s capital earlier this week. Ms Tips’ spies tell us she attended the National Press Club address by Senator Penny Wong on Tuesday, and that she was in town to plant a rose bush at Parliament in memory of the late Don Randall. 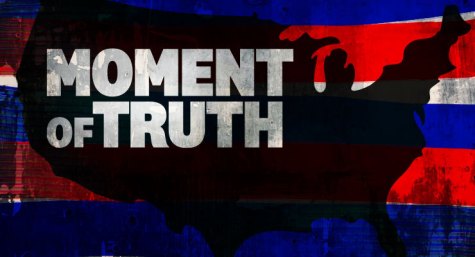 ….or perhaps it was Carnegie’s How To Win Friends and Influence People.’