‘Don’t be a pussy, vote for Trump’: scenes from a victory party

As the results from Florida start to trickle in, the scene at American Legion Post 440 is one of an inexplicably jingoistic bar mitzvah.

The American Legion Post is roughly the equivalent of an Australian RSL, and on a stunningly clear Boston night it’s playing host to the “official” Massachusetts campaign party for Donald Trump and Mike Pence.

Downstairs, veterans are drinking in a meek pub pumping Beyonce. Upstairs, the state campaign’s deputy director Dianna E. Ploss is buzzing to and fro, welcoming guests as they arrive. Their number will eventually hit around 50, an odd crowd who are enthusiastic about the candidate and, in some cases, have gone door-to-door for him.

Three middle-aged white men in suits are struggling to hook up a projector that will, eventually, broadcast Fox News’ election panel. The the room is decked with vacant tables covered by white cloth and sporting red, white, and blue balloons. In case the symbolism is too subtle, it’s also punctuated by American flags plus a cake iced with a flag and chocolate cursive spelling “God Bless America”. In the middle of the room is a square dance floor surrounded by Trump signs.

“Don’t be a pussy,” one instructs readers. “Vote for Trump”.

In liberal Massachusetts — the home state of the Kennedys, Mike Dukakis, Mitt Romney — Trump’s supercharged nativist nationalism hasn’t resonated so well. State Republican big-wigs are having their own party elsewhere. If it bothers those gathered at the Legion Post they don’t show it.

“It’s not a swing state,” laments Ploss, who wears a red dress and a US flag scarf. She points to the dance floor. “But tonight it’s a swinging state!”

As people continue to arrive I chat to the young bartender. He’s friendly and a little curious about the crowd, but otherwise not too fussed by proceedings.

Among the first Trump supporters is Ukrainian-American Jewish convert Raya Porter, who says she voted for Donald because he was a good father to his children and would also be one to America. It’s her first election as a US citizen.

Back in front of the now operational projector 49-year-old Kristin Lembo is desperately searching Twitter for the latest Florida results. We start talking and I mention I’m from Australia. She suddenly changes gear.

“But in Australia, didn’t they take the guns!? That’s what we’re headed for now! And they’re not taking mine!”

People are a little suspicious when they see my notepad, but they’re also very keen to talk.

Richard Newlun, a 34-year-old from Arkansas with a sweet southern accent, tells me the media report only the parts of the story they want the public to know, and are “so biased”. Yet he is nothing short of charming and happily chats on, expressing his wish to one day visit the Great Barrier Reef after encouraging me to watch two films on YouTube exposing the criminality of the Clintons. There is no chant of “lock her up” at any stage of the night but no shortage of suspicion either.

Newlun voted for Obama in 2008 and has been torn by Trump’s immigration stance: one of his best friends is of Mexican heritage. His wife lives here illegally, and he’s worried she may be deported.

“I would be devastated,” Newlun confides.

And yet here he is at a Trump victory party.

“I’ve been exposed to the corruption of the Clintons since I was young,” he says at one point.

As I’m speaking to him Fox News announces that Trump has won Arkansas, and Newlun breaks into a regional rally cry usually reserved for college football games.

Dianna Ploss reappears. She’s among the majority of white women who, we will find out within hours, have not been put off by Trump’s treatment of women. Ploss quotes something her mother said to her earlier in the night.

“I don’t care if Trump cuts out his wife’s liver and eats it on the White House lawn,” she quips with a hearty laugh.

I ask what exactly was meant by that. She says it should be clear.

If Newlun seems an unlikely character to embrace Trump so warmly, he’s nothing compared to the table of Asian-Americans who raised $35,000 to charter a plane with a Trump sign to fly over the neighbouring swing state of New Hampshire.

Jessica Zang, in her 40s, says their group got together on the messaging app WeChat. Like others at the table, Zang is concerned by changes in Massachusetts prohibiting the exclusion of transgender people from public bathrooms. They’re also perturbed by the case of Peter Liang, an Asian-American cop who was charged after shooting an unarmed African-American to death.

As Zang is explaining this to me she is interrupted by one of the two white men at the table, who resists her attempt to continue speaking, blurting over her “can I speak for a second”, and shaking his head. After his intervention our conversation continues.

States that should form part of Clinton’s so-called “firewall” are coming in now but Fox isn’t calling them for the Democrats. The excitement is building and it’s time for some speeches.

We pause and stand for the Pledge of Alliance, hands on hearts. Dianna Ploss takes to the little stage in front of the projector and thanks everybody, then leads them in a chant.

“Two-four-six-eight, who do we appreciate? Trump! Trump! Goooooo Trump!”

The last person I talk on the table is May Meng, a 48-year-old mother of three who closed her restaurant for the day to doorknock in New Hampshire.

By the time the cheerful 40-something Yi Li gets up on the podium to address the room just for the next round of addresses it’s clear to all that something is afoot.

“I’m here to stay for [a] party!” he declares to applause.

At that moment, Fox calls Ohio for Trump and a mighty cheer goes up. “Keep talking,” someone yells. “You’re good luck!”

The excitement in the room is giving way to anxiety. What once seemed fantastical is materialising. It’s never been their race to lose — until now.

Beer number two, and the guy working the bar is looking livelier than before. “This isn’t actually that boring,” he chirps.

The same can’t be said for the other journalist at the party, a young woman studying in Boston and here to cover the event for her student paper. She’s stoically forging on with her interviews but looks grim, staring in disbelief at the equally bemused Fox personalities. I go over for a quick caucus and she observes darkly that she also holds British citizenship. She doesn’t laugh.

There’s no dancing yet, but God Bless the USA is blaring.

Then it happens. Two surprises in quick succession.

Ted Busiek, a youngish Republican who had contested a seat in the Massachusetts state senate and sees himself as part of the “alt right” crowd, is excited. He lost his race but he’s confident about the future.

We talk Clinton and foreign policy before he brings up an Australian cartoonist whose name he can’t quite get right. It’s Bill Leak. Even here, in an American Legion Post in Boston, you can’t escape.

Busiek doesn’t want to criticise Australia too heavily as an outsider and isn’t enamoured by Leak’s work — “I got a chuckle out of it but didn’t think it was inspired” — but he’s deeply unimpressed by the idea of “a law against racial vilification” enforced by “some minister for racial harmony or whatever”.

Busiek was surprised by the Leak controversy because he generally looks up to Australia.

“They take refugees and put them on an island,” he exclaims. “And I think, way to kick ass guys!”

He thinks that sexual harassment is now the big frontier for freedom of speech in America, something he tells me as an unavoidable conclusion is slowly dawning in the room and around the country. Donald Trump is going to be the next President of the United States.

All my assumptions from 8pm are forgotten and the dancing has begun. Three people groove in front of the DJ booth to the sounds of Sister Sledge’s We Are Family.

There’s no escape now for liberal America: the Presidency, the Supreme Court, Congress. Trump’s going to be king of it all. Abortion rights, the Iran deal, climate action. They could all be rapidly wiped from history. And that’s before the deportations begin.

Struck by a sudden need to be with the people I love I say goodbyes and make an exit, ready to head home and bunker down somewhere with better wi-fi.

Waiting in the Legion car park I admire its 30-foot flag pole, hoisting the biggest star-spangled banner I’ve seen all night. It hangs limply while a few Trumpers fret on the final results over their cigarettes.

As I head out into the dark towards an Uber I see the young college reporter loitering in one of the bleakest corners of the nearly vacant lot, phone held sternly to her ear, tears running down her cheeks.

We go quiet for a moment. 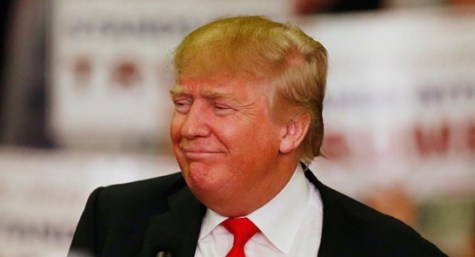 Rundle: a Rubicon moment for Trump, live from the Rodeway Inn