Taking out the trash: the news they tried to hide from you

"Taking out the trash" is an attempt to bury a story on a big news day. Crikey's Josh Taylor, Sally Whyte and Myriam Robin have dug up the stories you weren't supposed to notice.

While all eyes were focused on the United States on Wednesday, many Australian governments, businesses and organisations made announcements they hoped we wouldn’t notice. But we did. Here’s the list:

The Australian Football League quietly announced that it had fined seven clubs under the league’s Anti Doping Code. The fines weren’t for taking drugs, but for clubs failing to provide the whereabouts of their players to the league for the purpose of drug testing. Players can be tested 365 days a year. Hawthorn was fined $7500 for three breaches, West Coast and Geelong will need to pay $5000 each for two breaches, and Collingwood, Essendon, Western Bulldogs and St Kilda all had one breach each, costing the clubs $2500. While this seems like a minor issue, the AFL and ASADA are still investigating Greater Western Sydney over claims that staffers Craig Lambert and Graeme Allen hid player Lachie Whitfield at Lambert’s home in May 2015 over concerns that the player would fail a drug test.

Victorian Corrections Minister Steve Herbert held onto his job for two weeks after the Herald Sun revealed he had been using his taxpayer-funded vehicle to chauffeur his dogs, Patch and Ted, to and from his country house in Trentham and his suburban home in Parkdale. He announced his resignation from the ministry Wednesday afternoon, and said he would not re-contest his seat at the 2018 election. Herbert and Premier Daniel Andrews would have been hoping to avoid another damning front page of the Melbourne dailies. It was somewhat successful — the story appears on page 10 of The Age, after the US election special, but it had a full two-page spread on pages 12 and 13 of the Herald Sun. Editor Damon Johnston also tweeted a “Twitter and web only” front page yesterday afternoon. 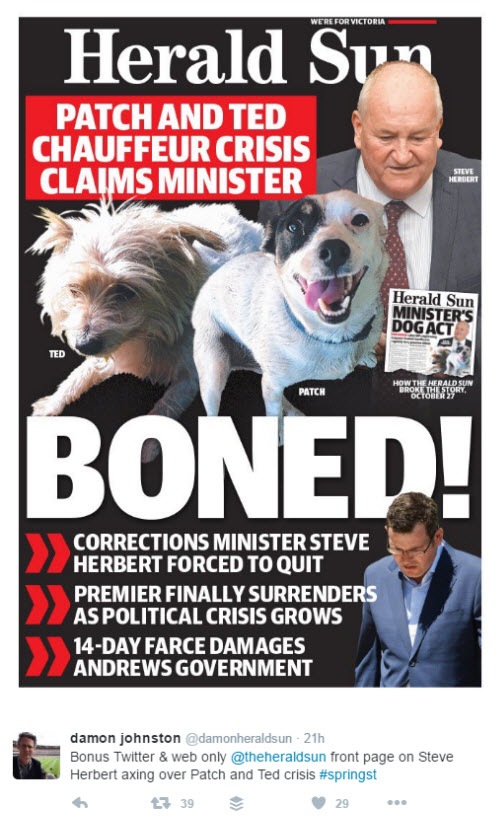 Late on Wednesday afternoon, the government introduced legislation it had been sitting on for almost a year that would give — as former communications minister Stephen Conroy once gloated he had — unfettered power over telecommunications companies to the Attorney-General, on the grounds of “national security”. For more on this see Josh Taylor’s story.

The government introduced legislation that will “give legal and commercial certainty to uranium mining companies in Australia so that they may fulfil contracts to supply Australian uranium to India for civil use with confidence that exports would not be hindered by domestic legal action challenging the consistency of the safeguards applied by the [International Atomic Energy Agency] IAEA in India with certain of Australia’s international non-proliferation obligations”.

As we reported in Tips and Rumours, Rio Tinto made a quiet announcement about suspending an executive:

RioTinto has just fessed up to a possible act of bribery involving a US$10.5 million payment of some doubt concerning the huge Simandou iron ore prospect in Guinea in West Africa (which Rio is now in the process of exiting):

“On 29 August 2016, Rio Tinto became aware of email correspondence from 2011 relating to contractual payments totalling US$10.5 million made to a consultant providing advisory services on the Simandou project in Guinea.

“The company launched an investigation into the matter led by external counsel. Based on the investigation to date, Rio Tinto has today notified the relevant authorities in the United Kingdom and United States and is in the process of contacting the Australian authorities.

“Energy & Minerals chief executive Alan Davies, who had accountability for the Simandou project in 2011, has been suspended with immediate effect.

“Legal & Regulatory Affairs group executive Debra Valentine, having previously notified the company of her intention to retire on 1 May 2017, has stepped down from her role.

“Rio Tinto intends to co-operate fully with any subsequent inquiries from all of the relevant authorities. Further comment at this time is therefore not appropriate.”

Davies is no junior Rio exec — he is a biggie. Earlier this year he was given control over the company’s energy and minerals divisions, and in 2011 he had accountability for the Simandou project.

Ardent Leisure’s CEO Deborah Thomas used US election day to announce the Thunder River Rapids ride, on which four visitors lost their lives a fortnight ago, would be demolished. “Out of respect for the memories of Cindy Low, Roozbeh Araghi, Kate Goodchild and Luke Dorsett, and their deeply affected families, the ride will be permanently decommissioned,” she said in a statement to the ASX. “The closure of the ride is the only respectful and appropriate course of action … No ride at Dreamworld will operate until the Workplace Health and Safety Audit has been completed and unless it passes the multi-level internal and external review process.”

Later that day, Ardent Leisure issued another statement, this time from the CEO of Dreamworks Craig Davidson. “From today, we will begin to move towards the re-opening of Dreamworld,” he said, before issuing media with an operational update that mentioned the progress of the safety review currently going on.

As Stephen Mayne pointed out yesterday, the Commonwealth Bank on Wednesday became the first company to ever cop a shareholder strike against its remuneration report (which means more than a quarter of shareholders voted the thing down). It still got up, making the bank’s senior executives $44 million richer. The Commonwealth Bank hasn’t been immune to scandal in the past year — its CommInsure arm has been slammed for pressuring doctors to assess patients with an eye to avoiding insurance payouts.

The conveniently timed AGM stopped these issues getting a big run in the media. The election also gave CBA cover to withdraw a resolution aiming to grant up to $4 million in performance-tied pay to CEO Ian Narev — the bank said the resolution would have passed but it had “heard shareholder concerns” about it.

After a meeting on Tuesday, the Palaszczuk Labor government in Queensland on Wednesday introduced an amendment to new water legislation, passed Thursday morning, which gives Adani’s controversial Carmichael mine an exemption to new water legislation. That legislation required mining projects to get a water licence, to reduce the impact of mining on ground water, and follows earlier attempts by the previous Newman government to that removed the requirement from December this year.

Did you see an announcement that was “taking out the trash”? Drop us a line here or tweet @joshgnosis, @sallywhyte or @myriamrobin. 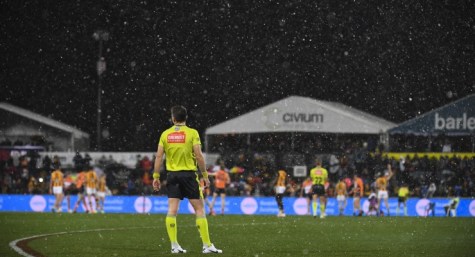 Was the Hawks-Giants game the first AFL match played in snow?

AFL supporters, this is you

It has taken far too long to regularise Australia’s uranium trade to India, during which India has burnt millions of tonnes of coal. The fact that some of it was Australian coal might have something to do with it. All movements of Australian uranium and its products are policed by the IAEA. IAEA inspectors have internationally authorised access to all parts of the industry that use the stuff.