No pictures please ... getting out the bagel vote ... snagging democracy ...

You want Yanks? Go to where the bagels are. An estimated 106,000 Americans live in Australia, and if 2000 is anything to go by, they could be the deciding factor in this year’s election. But how to find them and get out the vote? Democrats Abroad Australia chairman Todd St Vrain, who is based in Sydney, told Crikey they’ve been hitting up markets and bagel stores to hand out fliers, made countless phone calls, hosted events to watch conventions and debates, and developed targeted ads.

Democrats Abroad also helped Americans (well, American Democrats) work out how to send absentee ballots and set up a a “voter help desk” chat service on their website.

What about the Republicans? What’s a Trump-loving Australian resident to do? They’ve been pretty MIA this election — a February report from the Rothermere American Institute at Oxford University found much less support for Trump among Americans living overseas. Their preferred candidate was Marco Rubio, which might explain why the Republicans Abroad Australia organisation consists of a Twitter account and an 18-person Facebook group. Republicans Abroad have never really recovered since the head of Republicans Abroad declared in a past election he would be voting for Barack Obama.

In camera or no cameras? A rather unwelcome bit of news hit the inboxes of Perth scribes yesterday, in Fortescue Metal’s annual general meeting reminder notice sent first thing in the morning. According to a run-down on the email, TV crews would be invited to set up from 9.15am for the 10am AGM, but by 10.40am, when the presentations by chairman Andrew “Twiggy” Forrest and and CEO Nev Power were done, the “media vacate room”.

AGMs are one of the few times corporate governance can get lively, and the questions from shareholders that come after the boiler-plate speeches are the best bit. But for far too many companies, AGMs aren’t live-streamed, meaning you need to be in the room to get the vibe. This is usually justified by the need to protect the privacy of shareholders who might want to ask questions. But it leaves all retail shareholders who aren’t there reliant on the media to know what happened. Needless to say, Fortescue’s directive was met with umbrage by reporters across the resources sector. Fin Review bureau chief Julie-anne Sprague even tried to buy some shares to get in as a shareholder, but she needed to have held shares by 4pm the day before to be able to attend. She tweeted the whole thing, no doubt adding a bit of pressure on Fortescue as the day wore on.

Several hours later, Fortescue quietly reached out to those who generally cover it, telling them the whole thing had been a mistake. It hadn’t meant to bar “media”, just to get TV crews to stop filming. For the usual privacy of shareholders reasons, it’s kicked out TV crews after the speeches in the past. Crisis averted, but not without some cost — those Crikey spoke to about it all said the company should know better. And not everyone was buying Fortescue’s explanation.

Companies do not have to allow the media into their AGMs, and plenty of small-fries do not, particularly when they’re trying to pass something controversial. And it’s not unheard of for individual reporters to be barred from AGMs. But for companies of Fortescue’s size and importance, it’s a very bad look.

Taking out the trash? We are sure it is a coincidence, coming as the news cycle today is swamped by the US elections — and especially the presidential poll — but RioTinto has just fessed up to a possible act of bribery involving a US$10.5 million payment of some doubt concerning the huge Simandou iron ore prospect in Guinea in West Africa (which Rio is now in the process of exiting):

“On 29 August 2016, Rio Tinto became aware of email correspondence from 2011 relating to contractual payments totalling US$10.5 million made to a consultant providing advisory services on the Simandou project in Guinea.

“The company launched an investigation into the matter led by external counsel. Based on the investigation to date, Rio Tinto has today notified the relevant authorities in the United Kingdom and United States and is in the process of contacting the Australian authorities.

“Energy & Minerals chief executive Alan Davies, who had accountability for the Simandou project in 2011, has been suspended with immediate effect.

“Legal & Regulatory Affairs group executive Debra Valentine, having previously notified the company of her intention to retire on 1 May 2017, has stepped down from her role.

“Rio Tinto intends to co-operate fully with any subsequent inquiries from all of the relevant authorities. Further comment at this time is therefore not appropriate.”

Davies is no junior Rio exec — he is a biggie. Earlier this year he was given control over the company’s energy and minerals divisions, and in 2011 he had accountability for the Simandou project. Seen any more trash taken out while all eyes are focused on the US? Drop us a line here.

Snagging democracy. While the polls are closing around the United States, the ABC has given some voters in downtown Washington DC the chance to experience Australian-style voting. ABC News Breakfast co-presenter Michael Rowland donned an apron with the slogan “BBQ Showdown July 4th” and with tongs in hand lured Americans in for a quick vox pop on how they voted.

Those interviewed were unanimous in two things — their votes for Hillary Clinton and their approval of a good sanga in bread. 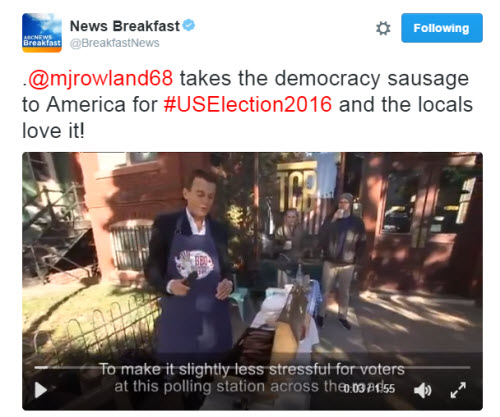 Could this be the beginning of a shared cultural tradition? Perhaps more people will take to the polls in America if they’re lured by the smell of frying onions. 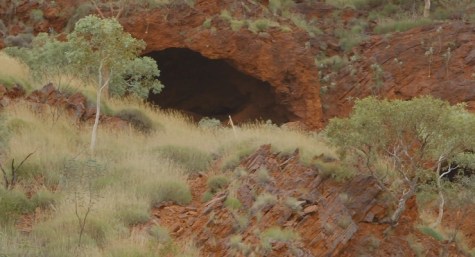