And what is happening in Congressional and Senate races?

Betting markets were quick to respond to the latest extraordinary twist in the presidential election campaign, when FBI director James Comey announced that the reopening of the investigation into the Hillary Clinton email affair had yielded no new information of interest.

Punters responded with a 48% increase in the volume of bets placed on Clinton over the previous day, including nine bets with stakes running into nine figures, and one of $25,000.

Despite the newly attractive odds, the volume of betting on Trump was barely more than half that for Clinton – and, despite the dramatic increase in activity overall with the approach of the big event, well below that of his previous best day on October 29, immediately after Comey’s initial announcement about the email investigation.

The market was ripe for a move back to Clinton in any case, with the most recent polling tending to suggest that the FBI investigation effect was already washing out of the system.

As the major pollsters report their final results of the campaign, an aggregation of national polling (illustrated in the chart below, with Clinton in blue and Trump in red) suggests that Donald Trump’s fortunes peaked at the close of October, and had reversed to the extent that Clinton’s lead had widened by nearly 2% as of Sunday, immediately before Comey let the world know she was off the hook.

(Observers of Comey’s recent form might care to note that Sportsbet is offering $2 on him still being FBI director in 2018, versus $1.72 on him departing.) 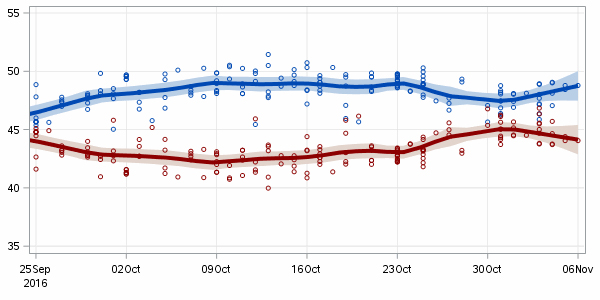 If the wisdom of the polls and markets proves correct and Clinton indeed makes it to the White House, her challenges will begin in earnest — with none posing more menacingly than the threat of a Republican-controlled Congress.

That too stands to be determined when voters go to the polls, with “down ticket” prizes including all 435 seats in the House of Representatives and a third of the seats in the Senate, in which each of the 50 states has two representatives.

A Republican victory in the House is considered all but a formality, in large part because the party’s dominance in state politics allows it to draw electoral boundaries to its own advantage.

The big question is whether they can also keep hold of the Senate, and with it a chokehold on any effort by a Democratic president to fill the Supreme Court vacancy created by the death of conservative justice Antonin Scalia in February.

The Republicans have a big task on their hands, as the Senators whose terms are ending are those elected as part of the mid-term Republican landslide that voters inflicted on Barack Obama in 2010.

That leaves them defending 24 seats out of 34 up for election, with the Democrats placed to win a bare effective majority if they can take four seats from the Republicans, defend everything they already hold and win the White House, in which case tied Senate votes will be resolved by a Democratic vice-president.

The Democrats are reckoned to be all but assured of gains in Illinois and Wisconsin, and Sportsbet’s odds suggest they should also be confident about Pennsylvania, where Kelly McGinty ($1.20) is a clear favourite in her bid to unseat Republican incumbent Pat Toomey ($3.75).

Another strong Democratic challenge is being mounted in New Hampshire by the state’s Governor, Maggie Hassan ($1.45), against Republican incumbent Kelly Ayotte ($2.50), who has struggled to formulate a clear position on her party’s mercurial presidential candidate.

Democratic candidate Jason Kander had earlier been favoured to pull off the remarkable feat of sinking Roy Blunt in the red state of Missouri, being boosted in no small part by the election’s smartest campaign ad, but the late momentum has been with Blunt, who is now at $1.50 compared with $2.50 for Kander.

The threat to the Republicans also appears to be receding in another red state, Indiana, where Democratic candidate Evan Bayh is now on $3.75 compared with $1.22 for the Republican, Todd Young.

Democratic hopes have also faded in North Carolina, where incumbent Richard Burr ($1.22) has the inside running against Deborah Ross ($3.75), and Republican presidential aspirant Marco Rubio ($1.07) looks increasingly secure against Patrick Murphy ($6.50) in Florida.

The Democrats also have a fight on their hands to retain their seat in Nevada after the retirement of party stalwart Harry Reid, although their candidate, Catherine Cortez Masto ($1.36), appears to have gained a slight edge over GOP contender Joe Heck ($3.00), who has courted displeasure from the party faithful by publicly criticising Trump.

The overall picture sits comfortably with the forecast models of the Princeton Election Consortium, Huffington Post and the New York Times, which have the Democrats slightly favoured to win control at 79%, 66% and 55% respectively — although Nate Silver’s FiveThirtyEight is true to form in being more favourable for the Republicans, recording a perfect 50-50 split.

All US Elections 2016 markets available at Sportsbet.com.au. Plus, join Sportsbet.com.au and get your first deposit matched with a bonus bet up to $1000* (excludes residents of VIC, NSW, WA, SA)