Bob Day's loan to the new owner of his electorate office wouldn't be paid back until the government paid rent on it.

As part of the motion to refer his eligibility to be elected to the Senate, the government yesterday tabled more than a dozen documents associated with the lease of former senator Bob Day’s electorate office. The documents show that the Fullerton investment firm that purchased the property from Day was set up in late 2013, seemingly just for the purpose of purchasing the Kent Town office from Day only to lease it back to the federal government for Day to use. The reason why the matter is being referred to the High Court is that the sale was done using vendor financing, meaning Day loaned the cost of the purchase to be paid back over time.

One of the documents tabled reveals that Day told the government that the loan — which he says is a separate agreement from any lease the owner has with the government — would not be paid back until the government began paying rent on the property. 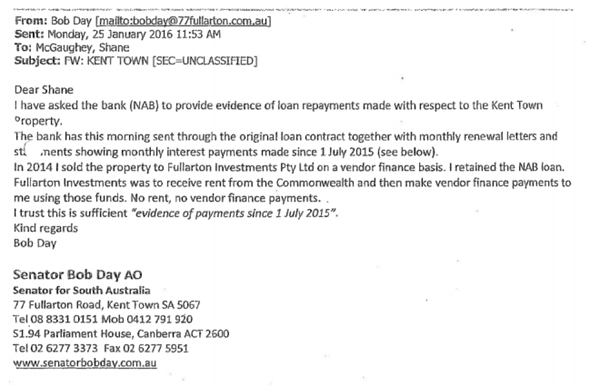 Although he still has the loan with the owner of the building, and the owner was then paying back the loan with money from the rent paid by the government for Day to use as his electorate office, Day told the government in an email he thought it was not a pecuniary interest because a researcher in the parliamentary library provided him with information that suggested it was not. 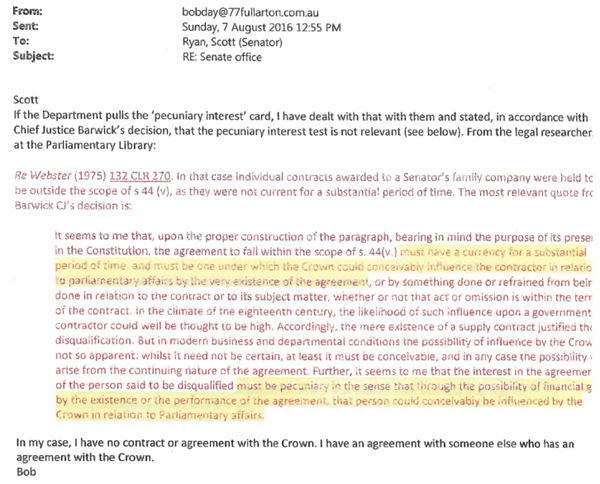 From the government’s point of view, the documents show Special Minister of State Scott Ryan looking the best from the whole mess, thoroughly investigating the matter when it was drawn to his attention after he was appointed the portfolio.