News Corp is on the march again.

The 200 signatories to an open letter calling on The Australian to apologise for the Bill Leak cartoon currently making its way through a Human Rights Commission adjudication have become the latest targets in News Corp’s war against its critics.

Though the list of figures, many of them from the media, first came together in August, it appears to have only recently come to the attention of News Corp. Yesterday, Andrew Bolt featured it on his blog as a “list of the media’s enemies of free speech”. “Now you can read the names of 173 people who actually want Bill Leak’s cartoon banned,” the columnist wrote.

Writing in The Australian today, legal affairs editor Chris Merritt was somewhat more circumspect, writing only that the 200 figures had been “isolated” after putting their names to the open letter. On social media, the Oz went a little further: “These people want to silence Bill Leak,” a tweet this morning said, listing a number of the more prominent figures to sign the letter. 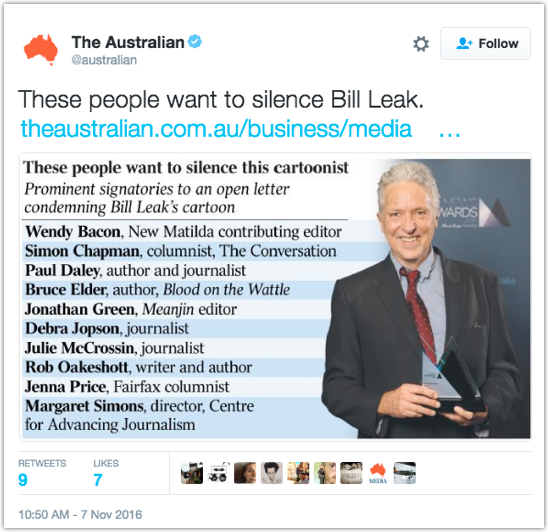 It is hard to make the argument that the figures on the list want to see Leak’s cartoon “banned”, as their open letter merely asks for an apology. It states:

“We condemn The Australian’s publication of Bill Leak’s racist cartoon. Racism damages the health and wellbeing of those it targets … We urge the editorial leadership at The Australian to reflect on the hurt and distress they have caused, and to make a sincere and genuine apology.”

And the list well predates the revelation of an 18C complaint against Leak. This morning, academic and Walkley-winning journalist Margaret Simons, one of those who signed the petition, tweeted that her position on 18C had been misstated. “First, I support reform of 18C and am in record on that for many years.” Secondly, she said there was nothing anti-press freedom in criticising Leak. Just as the Oz was free to publish the cartoon, she wrote, she was free to question its editorial judgement.

The Australian‘s front and inside pages today are full of stories about Bill Leak, many of them from the paper’s leading investigative scribes. Also on page 2 are the results of the Press Council’s adjudication against a much-criticised Leak cartoon from December last year, which featured poor Indians eating solar panels. Critics said the stereotypical depiction was harmful to Indians, but when the cartoon made global headlines, some Indian cartoonists defended it. Leak himself said the cartoon was making fun of greenies rather than Indians. The Press Council ruled that the cartoon didn’t breach its standards. “The Council considers that the cartoon is an example of drawing on exaggeration and absurdity to make its point.”

According to the ABC, Leak is in Canberra today, meeting with Liberal MPs on 18C. — Myriam Robin 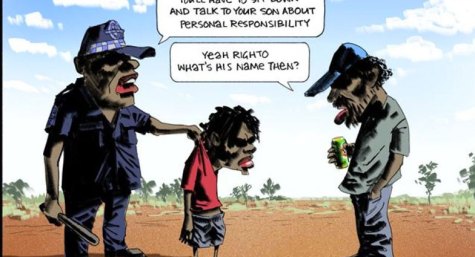 I’m impressed that it got published, at all. Does Australia value freedom of speech more than in the United States?

By signing -It is actually a public admission of stupidity – it says ” I didn’t get it’ or ‘ I missed the point’ or ” don’t have a sense of humour – unless it is American slap stick [pie in the face] laughter’
Thanks! -now anything those self confessed persons say or write should be taken with more than a grain of salt – thought processes too shallow on intellect, high on emotion.. Medicinal marijuanha will cure it !!!

I too thought the Leak’s cartoon was offensive, but thats a far cry from wanting to ban it. As an old lefty ‘publish and be damned’ is a position I heartily agree with. People who read the Australian regularly know well the ultra right opinions they are going to read there. Mostly you only have to read the first para of regular contributors like Janet, Judith or Paul to know exactly what they’re going to say, and you can skip over it, which I often do. In any free society its important to know who the religious far-right, misogynists, racists or just plain nasty a-holes are, especially if they hold public office or are lobbyists. These people generally love to evangelise their positions and a free media shows us exactly who they are.

My concern with Bill Leak’s cartoons isn’t that they are crude and rely on racial and cultural stereotypes. Far worse than that – they just aren’t funny any more. It seems that when he had his bad fall some years ago, his body recovered – but his brain did not.

As with the Drumpfster, Blot, Rat Hately and the other shout jocks, not to mention the current crop of crazies behind Major Hanon in the Senate, I do not want them banned as it is essential to a healthy public debate that we know what poisons &evils lurk in the mud of their tarnished psyches.
If we don’t know what they are saying it is a great deal harder to confound their idiocies with facts. Not for their consumption but the rest of the populace who might think there is some point to their blatherings.