Boots on the ground. One of the claims around the tightest election race this year, between Liberal Ewen Jones and Labor’s Cathy O’Toole in Herbert in far north Queensland, was that Defence Force officers off on a training exercise in South Australia weren’t able to vote, and they could have swung the seat. In its submission to the parliamentary committee the Australian Electoral Commission said that after the recount was done (O’Toole won by 37 votes), it undertook an investigation to ensure that there had been enough ballot papers available to ADF officers enrolled in Herbert but outside the electorate on polling day as part of Exercise Hamel.

There was, however, an issue with multiple voting, with 195 cases identified by the AEC in Herbert. Of these 103 were determined to be administrative error, and of the remaining 92, the AFP was asked to investigate 42. It decided in August that there wasn’t enough evidence to take it any further.

Bruce Billson really, really loves small business. For some enthusiasts the roar of small business never dies down, constantly humming with a fervour that can’t be shaken. But none can match the enthusiasm of former minister for small business Bruce Billson, who last night attended the Smart50 Awards (hosted by our sister site SmartCompany), tweeting up a storm and captivating the crowd with a cracking speech. Of course, Billson isn’t actually small business minister any more, but he seemed to do a good job considering actual Small Business Minister Michael McCormack didn’t turn up. 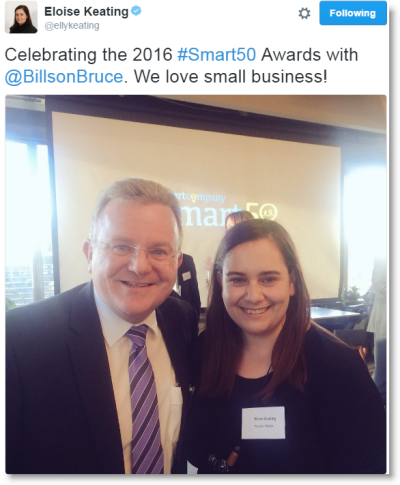 Billson is now executive chairman of the Franchise Council of Australia, so small business is still his bread and butter, and we hear that he lit up the event at Melbourne’s The Cluster co-working space last night.

Welcome to the digital future. Expect delays. Fairfax is the country’s leading digital media company, its CEO Greg Hywood told investors at its annual meeting yesterday. That was something of an irony for those listening along at home and work, who told Crikey they couldn’t get the webcast audio to work. Ms Tips herself wanted to listen to the AGM today, but it wouldn’t load at all this morning.

Meanwhile, scribes at News Corp had an interesting afternoon, with masthead sites not loading for them on the News Corp’s own internet. “Mobile sites are accessible via your 3g or 4g network service,” staff were told in an email. “If you have a device that can be taken off the internal network — you should be able to navigate to your site to check on publishing updates.”

Outsourcing health. Students and staff at Monash University could struggle to get help with mental health issues under a plan to outsource services at the university, student and staff unions are arguing.

In the existing program, counselling is offered free to every student with a short wait time, whether or not they have a diagnosed mental health condition. For instance, the services include guidance and support for exam stress, coming out, grieving a loved one, and sexual assault.

But Monash is booting a third of its in-house counsellors and increasing the number of psychologists on contracts, who require a mental healthcare plan from a GP.

An article in Monash student rag Lot’s Wife — written by members of the National Tertiary Education Union — argues the move changes the role of counselling from a preventative measure to a reactive process to deal with a crisis.

While Monash University says there will be 30% more sessions available to students, the NTEU argues it would mean quantity over quality, with less ongoing care available outside appointment hours.

Monash said in a statement:

The NTEU and MSA also claim a $50 fee will be applied to no-shows or late cancellations for sessions with professional psychologists. Monash, however, says this is not true.