Is Trump a smart bet?

Revelations from FBI director James Comey that the FBI is still investigating Hillary Clinton's emails have narrowed the polls considerably.

After some unexpected turns in the most sensitive phase of a wildly unpredictable presidential election campaign, those who had taken a punt on a Donald Trump victory are looking a lot less rash now than most would have thought at the time.

The potential game-changer was the revelation on Friday that the FBI has renewed investigations into Hillary Clinton’s email server from her time as Secretary of State.

The only thing that can be said for certain about FBI director James Comey’s vaguely worded and fiercely criticised announcement is that it ensured the final stage of the campaign would be dominated by the issue at the heart of Donald Trump’s call for his opponent to be “locked up”.

Even before then though, at least some improvement was evident for Trump after his mid-October low point in the wake of the three debates, as indicated by the trend measure of national opinion polling shown below. 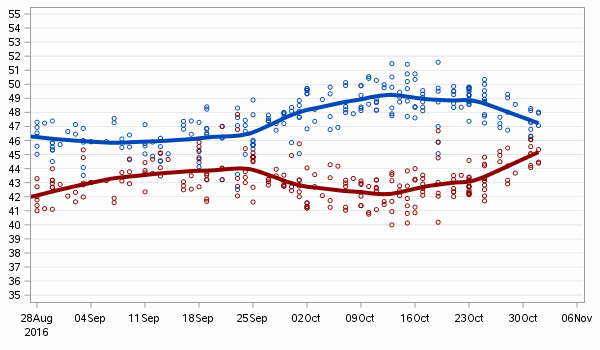 A deeper analysis of the poll results suggests Trump owed his uptick to wavering Republicans finally deciding to put party loyalty first as the big decision came into view.

However, it was the FBI bombshell that really turned the tide in Trump’s favour, and which also caused betting markets to sit up and take notice.

As shown by the chart of stake volumes below, Friday was by far the biggest day of betting for the entire campaign, with one Sportsbet customer leaping into the fray with a $100,000 bet on Trump at $3.80.

It wasn’t one-way traffic though, with many taking advantage of the improved odds on Clinton.

Ten five-figure bets have been placed on Clinton since that time have, including one on Friday for $65,000.

As a result of all this activity, Sportsbet’s payout on a Trump win had fallen from $5 on Thursday to $3.50 by Saturday, and has since continued a downward trajectory to its present level of $3.20, while Clinton went from $1.21 to $1.30 from Thursday to Saturday, and is now at $1.37.

Substantial though such movements have been, Clinton remains the front-runner, a status that continues to be justified by polling both nationally and in the key battleground states.

Certainly some of the states that had looked like adding fat to the winning margin in the electoral college, such as Arizona and North Carolina, are now looking a lot more difficult for her.

Clinton is also struggling in a number of places that have traditionally gone the way of the winning candidate, notably Florida, Ohio and Iowa, all of which were won by Barack Obama in both 2008 and 2012.

Nonetheless, the available evidence indicates that critical parts of Clinton’s “firewall” are still in place.

Every published poll suggests she has a lock on the 13 electoral college votes of Virginia, a former “red state” that has become increasingly favourable for the Democrats due to urban expansion around Washington DC.

Clinton has also led in every one of the dozens of polls conducted over the past few months in Pennsylvania, a finely balanced state that boasts 20 electoral college votes.

To make it to the White House, Trump will have to win each of the states that currently looks lineball, and cap it off with at least one minor upset — the most likely contenders being Colorado, which George W. Bush carried in 2000 and 2004, and Wisconsin, a traditional “blue state” with declining industrial areas that have responded favourably to Trump’s message on trade protection.

While the odds remain against Trump in both cases, neither would come as anything like as much of a surprise as appeared to be the case a few weeks ago.

And surprises are something that have not been in short supply in this most remarkable of election campaigns.