‘Jesus loves nachos is an icon’: the art of the impossible in the Top End

The NT government will not touch the "Jesus loves nachos", the iconic graffiti on the way out of Katherine.

Katherine is one of those Northern Territory towns with few redeeming features. Sure, the country nearby is wonderful, some of my best family and friends live — or have lived — nearby, and it now has a cafe that serves decent coffee and food. No, I’m not talking about Maccas or the Coffee Club, but the wonderful Finch Cafe in the old Country Women’s Association building on the main drag.

But the town itself? Meh. Double-Meh. Today’s weather forecast gives you an idea:

For some mad reason … love, perhaps? … I lived in K-town for a couple of years back in the ’80s, and I’ve been through the town for work a hundred times and more since. I’ve driven Darwin to Katherine beyond and back a couple of hundred times, mainly for work and rarely for pleasure. I know every passing point on that road and how long it will take me to get from A to B and back again almost to the minute.

And every time I enter or leave K-town from the north I cast my eyes westwards to the rusting railway bridge 50 metres from the high-level highway bridge. There are two things that I always look out for. The first is the gradation of river heights painted in fading white paint on the northernmost brick support for the railway bridge.

The Katherine — draining most of south-western Arnhemland plateau — is one of the country’s great untamed river systems. Upstream it runs a couple of hundred klicks into the central Arnhem Land uplands, downstream it joins with the mighty Daly to empty large parts of the western Top End into the Timor Sea.

How high the Katherine gets is always a good question to ask for a stream that for long months of the year runs in two flows — a massive underground river starts 20 or so klicks upstream around Donkey Camp and re-joins the above-ground flow a few more downstream at Rockhole. The surface flow runs past the massive stalwarts of the railroad bridge, between eight and 18 metres higher than the dry season stream. When the river gets to 18 metres and more it means the whole country around is well and truly flooded and no bastard would be on the highway to check the river heights.

Unless that bastard was drunk, which in K-town is just about a given.

The other thing I look westward for is a piece of fading and irregular graffiti that has been on the rusted slab sides of the railway bridge for as many years as I’ve been crossing the big river, as best as I can recall.

Over the years “JESUS LOVES NACHOS” has attracted its own share of fans. Fives years ago Grant Denyer — yes, that bloke from the telly — tweeted that “Of all the things you could write. He he … ” Some bright spark reckoned they could make a few bob flogging tops with the good fella’s image and his regard for the crispy chips and salsa emblazoned on it. 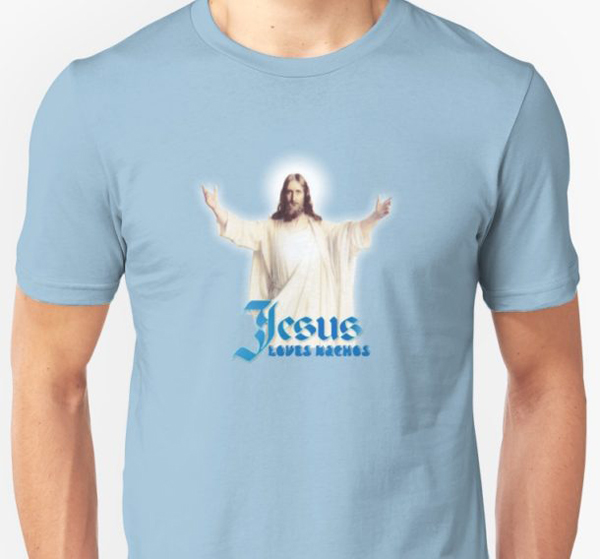 Then earlier today the local K-town journal of record — the inestimable Katherine Times — ran a feature on Jesus and his fond regard for fine food. The K-town Times was no doubt responding to a media release from the NT government Department of Infrastructure, Planning and Logistics, which helpfully included this wonderful photo of brave fellows working on the bridge. 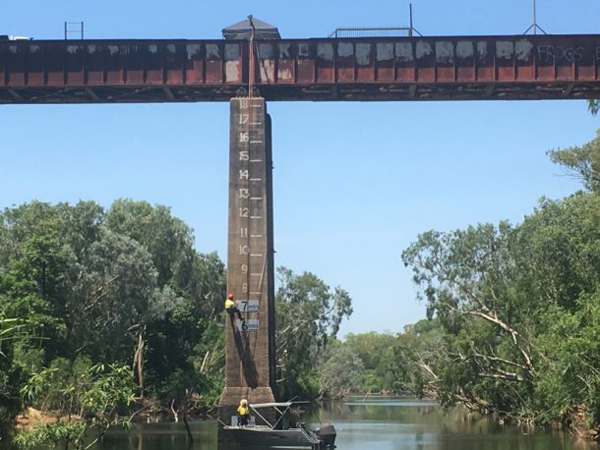 As the K-town Times breathlessly reported:

“ONE of the most well known if imponderable landmarks in the Northern Territory outback town of Katherine is a ancient piece of graffiti on the town’s famous railway bridge … And today the NT Government admitted it was too scared to touch it.

“’Jesus loves nachos is not to be touched,’ the spokeswoman said when pressed. ‘It’s an icon.’

If some fading graffiti on an old rusty bridge is what passes for art in K-town … well, fucked if I know why, but I can’t help but like it.

Back in the ’80s the bridge had another less benign example of the graffiti artist’s work. Thankfully “FREE KLAUS BARBIE” is long gone.

Water, water, everywhere: did the CLP throw a life ring to one of its own?