What do scientists make of Catalyst’s reinvention?

A review of Catalyst found staff had low morale and felt unsupported by management. The show will be completely reworked next year -- but the scientific community is split on whether that is a good idea, write Anthea Batsakis and Myriam Robin

Only one thing is clear about what the ABC’s Catalyst program will look like in 2017: not much is likely to stay the same.

The program, which has been the subject of a review started earlier this year after several shows were found to breach editorial guidelines, will return in 2017 as an “internally commissioned program”, but the format will be dramatically changed. The ABC commissioned 34 half-hour episodes of Catalyst this year. In 2017 it will air 17 hour-long documentaries using “leading expert subject presenters, rather than a fixed ensemble of science reporters”. The program will rely much more on external commissioning, overseen by an internal production team. ABC director of television Richard Finlayson told ABC staff today that the changes were “not a cost-saving expertise”. “In fact, we plan to invest more in Catalyst than we have in the past,” he wrote.

Nine of Catalyst’s permanent staff are likely to have their roles significantly changed, if they stay with the ABC at all. Another eight staff will not have their contracts renewed, according to the Community and Public Sector Union. Crikey has been told the ABC is not seeking a set number of redundancies from the program’s existing staff base, but the public broadcaster seeks to offer redeployment to as many of the program’s current reporters as it can. Catalyst in 2017 will have an executive producer — something it hasn’t had in the past — and will be located with the science teams in radio and online. A “small production internal production team” will also deliver “short-form content around each issue” to be aired on the ABC’s various platforms. This team will consist of six roles, including the EP.

The new format has garnered a mixed reaction from Australia’s scientific community. Outspoken public health expert Professor Simon Chapman — in the past a strong critic of some of the program’s reports — described it as a “black, black day. “Try showing hour-long docs in classrooms,” he tweeted.

But others Crikey spoke to, mostly before the changes were announced, said the show was in need of a revamp.

Dr Bryan Fry, who is a venom expert from the University of Queensland, says by striving for ratings, Catalyst fell victim to a cheap, consumerist culture.

“It was once very high quality, but there’s definitely been a corporate cultural creep towards sensationalism and a pretty blatant attempt to grab ratings. It may as well be Today Tonight — the stuff that grabs the headline for all the wrong reasons,” he said.

“If you’re going for ratings you’re going for the McDonald’s level of television. It’s a sign of the times and a battle of a much larger cultural war. We need it to be saved, not killed. The worst possible outcome is for it to be axed completely. Reset it with a nice clean mission statement. The solution really is that simple.”

University of Melbourne astrophysicist and science communicator Dr Katie Mack, who watches the show and has twice been a guest, says cancelling the show would be a real tragedy. “There have certainly been some missteps in a couple of its episodes, but in general I think it’s been great, and having science on TV every week is a really good thing.

“I’ve worked with [Catalyst reporter] Graham Phillips on both the shows I featured on, and I think he’s a fantastic asset — it’ll be a shame if the ABC loses him,”

Dr Alice Gorman, a space archaeologist from Flinders University, says having science content on free-to-air TV is important. “If Catalyst is to go, where will people be driven to get their science content? And what provisions will there be for adults, given there so much aimed at children? It’s also important to cater to a curious adult market.

“Catalyst had a broad interpretation of what counted as science. I think from that perspective, it was a really good framing of what science is and what it can be.”

“Also, to the best of my knowledge, [Catalyst reporters] Dr Graham Phillips and Dr Jonica Newby do an excellent job of reporting science accurately. It seems this whole situation has come about because of one rogue reporter.”

The “rogue reporter” Martin is referring to is Dr Maryanne Demasi, who was recently found by an internal ABC review to have breached the ABC’s impartiality guidelines through an episode of Catalyst she presented, on the potential dangers of wi-fi. Demasi has been suspended since the finding. In an email to staff this morning, Finlayson said “recent editorial issues were considered as a part” of the recent review, but were not the “only reason” for the changes announced today. 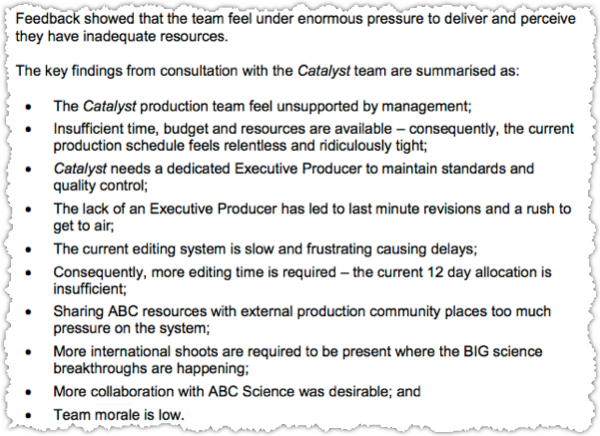 The review the ABC commissioned into Catalyst was also released on Thursday. The review was conducted by the ABC’s head of non-scripted production Brendan Dahill and head of factual Steve Bibb, and aided by a number of internal and external advisers. It made a number of recommendations, most of which were adopted by the ABC. It said changes were needed to “respond to declining audiences” on the program. It recommended a shift to the hour-long “documentary” format the ABC has adopted, as well as the shift to a “more flexible production” model using outsourced talent.

That review included consultation with the Catalyst team, who said they felt they were under “enormous pressure” to deliver with “inadequate resources”. It also revealed the team felt “unsupported by management”, and that “team morale is low”.

Perhaps in a bid to counter the inevitable criticism of the changes, the review cited the feedback of many internal and external stakeholders giving in-principal support for the shake-up, with reference to many of its key components. Radio National’s Dr Norman Swan, of the Health Report, said Catalyst should be more fully integrated into ABC Science. Former ABC board member and emeritus professor Dr Fiona Stanley said Catalyst’s isolation from the rest of ABC science was “the biggest problem that needs to be addressed”. She also made the point that the program’s current “magazine” version — meaning several short ten minute stories in the same episode — was hard to sell to international broadcasters, who gravitate towards 60-minute documentaries. Jonathan Webb, the content director for Science and Health and Radio National, is quoted saying Catalyst shouldn’t be “looking to uncover scandals”:

“We have other shows that specialise in that and have the journalistic rigour. In a collaborative One ABC, then if we suspect a scandal then we should hand the story over to 4 Corners.“

The review also quotes Professor Stephen Simpson, of the Charles Perkins Centre at Sydney University, describing the magazine format of the show as “tired”. “No subjects were given enough time to be covered well or in depth,” he is quoted as having said.

Why the ABC is right to axe Tassie TV production

I mostly like Catalyst and expect that the managerialist review will make it worse (don’t they do that to everything, and Michelle Guthrie does seem to want McTV for the ABC).

OK, those trivial Bondi Vet-like episodes about pets and their owners were a waste of science space, although somehow I think that is the sort of thing Guthrie wants for the ABC.

And there is much wider breaching of editorial impartiality on the ABC, which isn’t scrutinised. Overall they are supine in the face of the Liberal pressure at best, but that ends up in impartiality. Look at the IPA’s access to the ABC.

And Chris Uhlmann’s flagrant lack of impartiality and numerous errors on renewable energy seamlessly merging with the Coalition’s position, meaning that the impartiality has political meaning. (Why doesn’t he skip to Murdoch where he belongs?)

I think the Right’s definition of impartiality is ‘unswerving devotion to the Cause as the one and only Truth’. Anything other than that is classified as Leftist propaganda.

Interesting that the document made public does not include the financial analysis which justifies its claim that these big ambitious science documentaries of world class can be made at the same net cost as the current format of Catalyst. I wonder why?

I like Catalyst as it is and hope the revamp doesn’t head towards either too hibrow/purist, or too subservient to vested commercial interests. I’ve science and engineering degrees and am a rationalist of the first order, but I didn’t mind the dog training show, or the point of view of the statins show. (Unfortunately I didn’t see wi-fi but guess I would have hated it).

There is a place for light science like dog-training, and I hope space is retained for such. If the one-hours are to be on a single subject it seems unlikely to succeed. A mix of: a/medical, b/physics and ‘pure’ applied science, and c/light science with interesting insights, is what we need.