Greens rejoice as workers lose their jobs. Workers at the Hazelwood power station and mine have been told the station will be fully closed down by the end of March 2017, with all staff promised their full entitlements, redundancy payouts and re-employment assistance.

After months of speculation, the news was confirmed by Engie’s Australian CEO, Alex Keisser, at a meeting at the power station in the Latrobe Valley this morning, with workers called to a large marquee that was erected overnight. About 250 workers (half of whom will be contractors) will be given the opportunity of more work after April next year in the process of demolishing the power station and rehabilitating the adjacent brown coal mine. That process will take six years, concluding in 2023. It is understood that each worker will be offered $4000 to go towards re-training for work in new industries. Both the federal and state governments have announced multimillion-dollar assistance packages for the Latrobe Valley and the workers affected.

ABC Gippsland is reporting that workers at the Loy Yang B power station, the newest of the four power stations in the Latrobe Valley, will be briefed at midday on a possible sell-off. Loy Yang B is also owned by French company Engie, and there has already been speculation that Asian buyers are being courted. It’s possible that Loy Yang B could be sold to Mitsui, the Japanese company that owns a 28% stake in Hazelwood — Engie owns the other 72%. It is understood that Mitsui has been somewhat surprised by the speed with which Engie has moved to close down Hazelwood.

As Hazelwood workers arrived to the meeting today that confirmed they would be losing their jobs by April next year, they saw a large table full of envelopes, bearing the name of each worker. Back in Melbourne, former Greens candidate for lord mayor tweeted her congratulations to Greens MP Ellen Sandell. “#Hazelwood trending this morning & closing next yr,” she wrote. “A step towards #climate safety. Congrats @ellensandell & all who have worked 4 this day.” We’re sure the workers in the Latrobe Valley appreciated the sympathy as they ponder their futures. 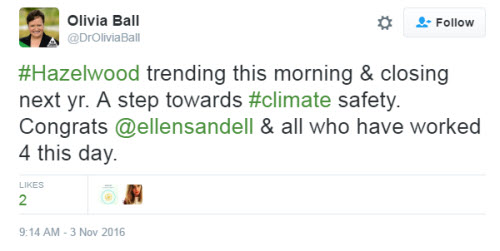 Dead, buried, cremated? Is the Australian Building and Construction Commission bill — that’s the bill that, based on the last time the ABCC existed, will cause construction sector productivity to fall and industry workplace fatalities to rise — actually going to be voted on this year? This is the bill, remember, on which Malcolm Turnbull based his double dissolution election and that he says is critical to the Australian economy. But yesterday’s draft legislative program for the Senate for next week’s sitting doesn’t include the ABCC bill. And after that sitting, there are only two weeks of sittings left at the end of the month before Parliament rises for the year. Turnbull this morning refused to say if the bill would come on for a vote this year, only that he was still negotiating with the (ever-diminishing) crossbench and it would only be brought on for a vote when the support was there for it. It’s a strange sort of urgent, economically important bill that could be allowed to slide until next February because the government is scared it might be voted down and will require a joint sitting to pass…

Government diaries released, sort of. While Attorney-General George Brandis has steadfastly refused to release his diary of meetings, his own department appears somewhat more compliant with the freedom of information law it administers. In response to a request released last month, the department released calendar events of meetings between agencies about the promosed plebiscite.

The result (unfortunately not online, because AGD insists it can’t upload FOI docs to its disclosure log because it doesn’t meet accessibility guidelines) is not that exciting and just shows inter-departmental meetings with the Office of Parliamentary Counsel, Finance, PM&C, Treasury, and the AEC about the plebiscite in the lead-up to the introduction of the legislation.

But the simplicity of the response could potentially pave the way for Brandis to ultimately produce his own calendar diary in response to shadow attorney-general Mark Dreyfus’ FOI request from 2014. Brandis’ office has insisted the request was too much work, and there were national security risks, but he lost a full Federal Court case in September, and the deadline for him to file an application to the High Court to appeal the decision lapsed last month. Brandis’ office is now required to process the two-year-old FOI request. Dreyfus’ office also recently filed an FOI request for Brandis’ meetings with groups supportive of and opposed to same-sex marriage in a bid to validate Brandis’ claim that he had had meetings with all sides before the introduction of the plebiscite legislation.

Compassionate conservativism. Former prime minister and aspiring indigenous affairs minister Tony Abbott is in Papua New Guinea, where he will meet with PMG Prime Minister Peter O’Neill. He also delivered a speech to an Anglicare fundraising dinner last night. Our tipster says he made a few interesting points:

“Tonight I attended Tony Abbott’s speech at a fundraiser in Port Moresby for Anglicare PNG. I can confirm he managed to say the words ‘we stopped the boats’ in the same speech where he made reference to the parable of the good Samaritan.”

Perhaps a parable about someone going out of their way to help another isn’t actually a great one to use in that context.

Abbott’s long disinterest in indigenous affairs. Speaking of Tony Abbott’s newfound aspirations, former New Matilda journo Amy McQuire writes that he hasn’t always been so keen on the indigenous affairs portfolio. In a piece on Medium, she writes of Abbott’s time in the shadow portfolio in 2008:

“He infamously quipped at the time that he would ‘like to be closer to the action’. As in, not in the Aboriginal affairs portfolio … but something that would elevate his status.”

“Abbott’s time as ‘Prime Minister for Aboriginal Affairs’ also included his telling remarks about ‘lifestyle choices’, that Australia was ‘nothing but bush’ before invasion, his expensive volunteer tours in Indigenous communities followed by salivating media lapdogs, his kowtowing to Andrew ‘Twiggy’ Forrest and the impact it had on social security … and there is so much more.”

Of course, now the portfolio is seen as a way to get “closer to the action”.

Guess who, don’t sue. A spy in Brisbane tells us this:

“One member of the Federal Government certainly enjoyed their Melbourne Cup. The senior figure, nursing a bottle of champagne, and a gaggle of staff, staggered back in to the Brisbane Commonwealth Parliamentary Office around 4pm Tuesday afternoon. Funnily enough at the same time the Member’s media adviser was issuing a very sobering press release.”

“Greens rejoice as workers lose their jobs.”
Oh FFS Crikey.
In case you hadn’t noticed, those workers were screwing the planet for all of us.
What’s next? Vikings forced to beg on the streets, as raping and pillaging outlawed?

But their business was death. Coal profits are paid for in lives taken by an extreme climate, and this suffering has been reduced by today’s announcement.

It would make sense to replace Hazelwood’s coal furnaces with nuclear reactors. The workers would retain or retrain their jobs without moving town. The state’s industry and homes still want reliable heavy-duty baseload electricity. The electric grid comes to a focus at the site, along with cooling water. Australia would make a significant step towards meeting its commitments on replacing its carbon-based energy sources. Or is there some superstitious resistance in the community to such a step?

So jobs are the only thing that matters is that it? What about all those poor cigarette manufacturing workers, asbestos installers, slave drivers….. ?

Re “Greens rejoice as workers lose their jobs”: this is a complete distortion of the Greens’ position. They have long advocated for an orderly transition from coal, including planning for replacement industries for the displaced workers as well as getting on with the transition to renewables.