Senator Derryn Hinch reveals what he and Gina Rinehart were discussing at this year's Melbourne Cup. Plus: a Twitter fight with David Leyonhjelm.

It’s Melbourne Cup Week, and the Senate doesn’t sit again until next Monday, so let’s start with a Cup story — prompted by Gina Rinehart’s unfortunate, and unseemly, tumble down the stairs when exiting the Emirates marquee.

In her defence, if there are any snickers about John Kerr or a “tired and emotional” state, I’ll admit I held the guard rail while descending because those temporary stairs were steep, deceptive and tricky. And I was drinking non-alcoholic wine I’d had couriered in.

The Rinehart incident reminded me of a similar tumble in the Members’ Enclosure in the early 1980s. The Cup’s indomitable doyenne, Lillian Frank, fell to the bottom of a stalled escalator just outside the champagne bar. As she lay on the ground, with a badly gashed leg and another flamboyant headpiece knocked askew, comedian Doug Mulray was heard to shout: “Put a screen around her and shoot her.” I was standing alongside of him. I think he was joking.

(It was good to see Lillian, and peripatetic party-goer husband Richard, back at Emirates on Tuesday.)

Speaking of the new commendably lite version of the Rinehart — who I’m told can’t be described as an heiress anymore because she inherited mainly debt from Lang — surprisingly, it was the first time we had ever met. A pleasant conversation followed in which she said: “We’d better not talk too long or people will think we’re discussing Kidman.” I said: “We’ll tell them we are … talking about Nicole.”

And on the subject of meeting people for the first time, at Mumm’s marquee I met Chloe Shorten and had a good chat about some of the issues that got me elected. Is it uncharitable to surmise that Bill is batting out of his crease — as they used to describe Julia Gillard’s mate, old what’sisname?

On those issues — like my push for a national public register of convicted sex offenders — I caught up with actress Rachel Griffiths, whom I’ve known since she was a teenager.

A worldwind (deliberate new word) of talent, she was at Flemington directing Ride Like a Girl, her new movie about last year’s winner, Michelle Payne.

We were talking about vile sex offenders in such an incongruous setting because, minutes before I gave a Melbourne Press Club speech recently, a hastily scrawled note from Rachel was thrust into my hand.

I knew she had been quietly campaigning for years against Australian men going on what I call “child rape holidays” in Cambodia.

In her note, which I read aloud that day, she made the chilling point that a bankrupt Australian can have his passport suspended and overseas trips banned for seven years but convicted paedophiles are free to travel.

It was the spark I needed to raise that issue in my first speech. Since then I have met with Foreign Minister Julie Bishop, Immigration Minister Peter Dutton, Border Force chiefs and the AFP. Encouragingly, at a recent meeting of state and federal justice and police ministers in Melbourne, they agreed to form a working group to see how that could be accomplished.

The group is to report back next year. I think something can be done sooner without new legislation and “in the national interest” by invoking current regulations. About 200 sleazebags have gone on such holidays in the past two years to Cambodia, Malaysia, Thailand, Myanmar, Indonesia and the Philippines.

Not coincidentally, last night I spoke at an anti-human slavery and child exploitation fundraiser in Sydney. Interestingly, Anti-Slavery Australia, based at the University of Technology in Sydney, is, I believe, the only university-based research centre in Australia dedicated to the rights of people who have experienced human trafficking here and abroad. And it does happen here. Think of Muslim child brides.

What was encouraging at the races was the number of young women, many of them young mothers (inexplicably wanting selfies) who, even in a carnival atmosphere, wanted to talk about the sex offender register and offer support for what we’re trying to achieve in Canberra. They were aware of the changes we forced on McDonald’s staff screening procedures and the call for a passport ban.

To wrap up the diary on a personal and political note. A dear friend of mine, Nancy Boyer, died on the idyllic Hawaiian hideaway called Kaua’i last weekend. I paid tribute to the civil rights champion on my Facebook page.

A former administrator at Columbia University in New York, she managed vacation rental properties on Kaua’i, including the Hanalei villa of golfing legend Bobby Jones.

The Clintons stayed there and were so impressed with Nancy they invited her to Bill’s inauguration.

Once, vice-president Al Gore and family were staying there. Nancy’s quaint caretaker cottage was next door to “the Jones house”.

My friend was a cat lover. One morning she was out hailing her latest pet, Tipper, oblivious to the Secret Service agents in and around the palm trees.

The Secret Service pounced. What threat to national security was this bag lady?

Nancy Boyer was blissfully oblivious to the fact that Al Gore’s wife’s name was Tipper. Serves them right really.

Almost forgot. David Leyonhjelm took to Twitter late Saturday night to steal a line from my last Crikey column and call me a “dumb pile of parrot droppings” — or something like that. 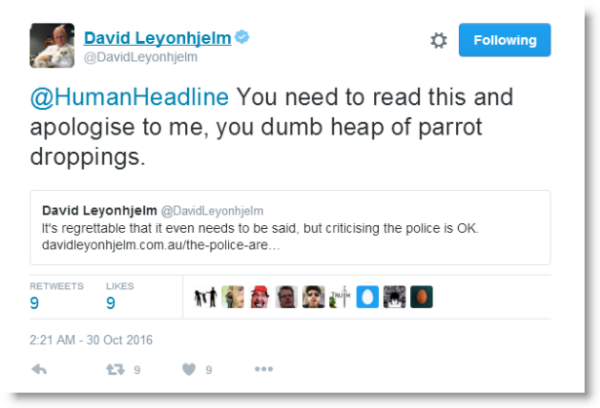 He demanded an apology for something I’d written. I declined. Stuck to my Twitter Law: answer a tweet once, personally or generally, then disengage.

At least he reads it.

Respectfully, Derryn, you need to read Adele Ferguson’s biography of Ms Rinehart. It’s clear she inherited a vast fortune, and the “debt” she inherited from her father was a result of moving assets around, for what appears to be the primary goal of making sure her step-mother didn’t get any of her father’s wealth.

But he WAS told that… by the venal elephant herself (to use her daddys pet name for her).

I haven’t the heart to tell him that human trafficking is almost the sole preserve of household servants (“sponsored” for some “working holiday”, then made to surrender their passport to said “sponsor” on arrival, effectively stranding them in said “sponsors” house to cook its meals, clean its loo and mow its lawns). If I told him that he’d spent the day hobnobbing with some of their masters, he’d be straight back on the turps. And he’s already had one liver.

“Is it uncharitable to surmise that Bill is batting out of his crease — as they used to describe Julia Gillard’s mate, old what’sisname?”

Uncharitable? It’s downright outrageous. Who used to say that the dapper Mr Matheson was batting out of his crease. I thought he brought the tone of the House up quite a bit, and I’m not talking about the Lodge.

So who used to say that? The other pollies? God knows, there is barely a looker among the men, in fact having been thoroughly beaten by the ugly stick seems to be a pre-requisite for political life. God forbid that it was the journos, for in the ugly-sticks stakes, only the pollies are in the same league.

Pot, Kettle. I would have thought you on the pulchritudinally-challenged side as well, Derryn.

Shame, Crikey, SHAME. Are electrons so cheap that they can be wasted on this?

If they ever create a Ministry of Name Dropping, Sen. Hinch is a shoo-in.