ALP says it was just following the rules on ‘Mediscare’ SMS

"Mediscare" election texts were all above board.

The Australian Labor Party has said it was compliant with rules around election advertising authorisations when its name was left off text messages sent from “Medicare” during the last election, but admits the rules probably need updating.

On July 2, Labor’s Queensland office sent text messages purporting to be from Medicare stating “Mr Turnbull’s plans to privatise Medicare will take us down the road of no return. Time is running out to Save Medicare.”

The text messages outraged the Coalition, with Liberal campaign director Tony Nutt describing it as a “new low” in Australian politics, with no authorisation usually associated with campaign advertising included in the text message.

The Australian Federal Police decided not to investigate the texts in August, and Labor, in a submission to the parliament committee charged with reviewing the election, said that it had followed the rules, but they were a bit out of date:

“The ALP complies with all current authorisation requirements. Authorisation rules have been developed over time and in a piecemeal fashion. As a result, the rules are confusing and difficult to administer. There is an arguable case that the rules have not kept up with technological change, and are unfit for the digital age.”

The ALP argued that rules in law are related to print and broadcast, and haven’t kept up with the advent of texting or social media. It has said there should be a uniform, format-neutral authorisation rule that would effectively mean that the party’s “Mediscare” campaign would not work again because it would have to contain the authorisation in the text message.

The Queensland Liberal-National Party agreed in its submission, saying the text message, along with robocalls were “the worst abuse” of the deficiency in the authorisation scheme:

“The strategy behind Labor’s ‘Medicare’ text relied upon the fact that they would not have to include a Labor Party authorisation. If it had, voters would have the information they needed to judge Labor’s actions for what they were: despicable. The misleading nature of that text message blast also raises questions about what remedies parties and candidates should have to prevent the dissemination of such material. The Committee should consider expanding the authorisation requirements to cover robocalls, text messages, digital and social media, and other like forms of political messaging.”

The LNP has asked the committee to consider whether “truth in advertising” could be brought about for future elections. The ALP has argued it could have a “chilling effect on democracy” and has said it may be constitutionally invalid, contravening the implied freedom of political communication.

Communications Alliance — the organisation representing Australia’s telecommunications companies, has told the committee in response to a request on whether the telcos could “police” authorisations of political advertising over SMS that it, essentially, is not their job and would require mass surveillance of all communications. 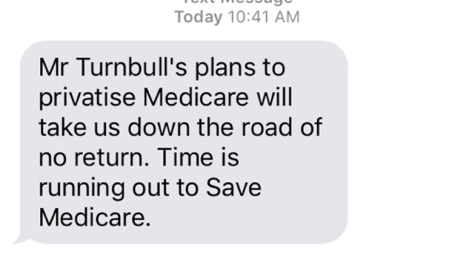 How to create your own ‘Mediscare’ text message 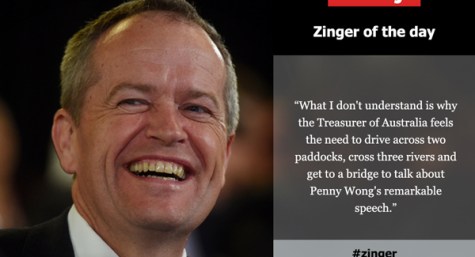 All political advertising should be obliged to comply with “Truth in advertising” rules as applies to all commercial businesses. No major political party will ever agree with that, but, that, along with establishment of a Federal ICAC, same time disclosure of donations, and an effective public education system are needed to save democracy.

LNP should be careful what they wish for. I personally think labor was on the money with their Medicare campaign, it is being privatised incrementally as we speak.

I agree with your comment, BJ.
The L/NP, when in government, does everything it can get away with to disrupt the basic elements of Medicare. Increasing the price of various elements of the system, by whatever means, is surely designed to attack universal access…for example.
The outrage of the ‘Mediscare’ message? Me thinks they do protest too much!!

I thought the issue was not that Labor’s warning about the LNP’s intention towards Medicare was false but that the text message on the Saturday morning of Polling Day misled people to think that it was a legitimate message coming from Medicare.
I did not think that Medicare worked on Saturdays, nor would it have been able to enter into the political debate. I saw the ‘Medicare’, at the top of the SMS, as the ‘title’ of the message.
Maybe, I am so use to identifying spamming and phishing, in my email inbox, that it did not occur to me that Medicare had sent me a message.
Are the LNP people saying all the voters are ‘dills’?
If there was ever a way to establish it, we would need to know if the Labor staff responsible for this SMS intended to misrepresent themselves. Otherwise the whole issue is a storm in a tea cup.