Bros before professional women. What’s the answer to male depression, domestic violence and the chore of walking to the gym during your lunch break, as well as dealing with the pesky issue of women in the workplace with their annoying ideas about diversity? A men-only co-working space in Brisbane called Nomadic Thinkers launched yesterday, with a press release expounding the idea that having a place to work and work out with no ladies around was revolutionary:

“Having finalised their funding, with the outlook to open in early 2017, Nomadic Thinkers has hybridised the co-working model with a gym space, as well as making membership exclusive to men, with the aim to launch men in business and life. The gender specific focus is bound to ruffle some feathers however the founders believe there is a genuine call in society for their offering.”

In an interview with Junkee‘s Osman Faruqi, co-founder Samuel Monaghan said the idea was an answer to domestic violence:

“‘We’d been working in coffee shops and at home and it wasn’t that conducive to working,’ Monaghan said. ‘We both had a mate who ended up in a violent situation with his wife. He pushed his wife over.’

“According to Monaghan, domestic violence is an issue that ‘stems from depression in many cases’.

“‘Depression and suicide result from a lack of social support and community. Having a space where they [men] can be men is more of a preventative measure,’ Monaghan said. ‘Healthy, happy men don’t hit their wives.’”

Faruqi went on to debunk this idea, but a closer look at the blog page of Nomadic Thinkers, now closed down but available through a cached version, reveals the co-working space is another front of the men’s rights movement, and references the work of Return of Kings, whose founder, Roosh Valizadeh, was denied an Australian visa this year to conduct workshops on how to become a “pick-up artist”. The Nomadic Thinkers blog post says:

“… taking a proactive role in leadership in your relationship setting ground rules at the beginning is vital. But how do you get to that point? If you are well versed with [Return of Kings] and other manosphere blogs the best way you can do this is by increasing your sexual marketplace value SMV, do this via increasing your traits as a provider and protector and increase your desirability making it easier to find a quality woman. Hit the gym.”

Today the founders have put out a second press release, writing “one of the great achievements of startup culture is its ability to change the way people do things. The aim of Nomadic Thinkers is to take this operating model and use it in a social setting to disrupt the way male related social issues are being addressed.”

They said they wanted to “acknowledge the public anger” from the Junkee article and said they didn’t want to trivialise the issues of domestic violence and depression. No one seems to have told them that male-only workplaces aren’t disruptive (76% of start-ups are founded by men), but as old as time.

Flying Heap of Crap Watch (TM).  The F-35 joint strike fighter, as part of its alleged multi-role capability, was supposed to replace the now-40-year-old A-10 “Warthog” close support aircraft — a venerable jet armed with a rapid-fire 30mm cannon capable of loitering over a battlefield and providing powerful support for ground troops, which is exactly what it has been doing in the US’ various ventures in the Middle East in recent years. Indeed, the schedule was that the A-10 was going to be mothballed from 2018. But not merely has the F-35 been delayed by many years and had repeated, major problems, there’s a real question about whether it can perform anything like the role of the A-10. Congress has repeatedly called for the USAF to retain the Warthog, and so widespread is the concern that the Pentagon decided to schedule a test of the F-35 versus the plane it is supposed to replace. Then the USAF decided not to wait for the test: the Warthog is going to be kept “indefinitely”, with repair facilities ramped back up and new investment in the airframe to keep it operational despite its age. Remember, the point of the F-35 is supposed to be that it can perform the same role as several other planes, thereby significantly reducing costs. That’s not much help if you have to keep one of your stalwarts in action while overspending by billions on a jet that can’t do anything right.

Hens in the Fox house. The key Murdoch family company, 21st Century Fox, releases its first-quarter financial results early tomorrow morning, Sydney time, and top of the list of analyst questions will be “What’s happening to Fox News?”. This doesn’t presuppose insider information on the financials of Fox News, Fox’s single most profitable and important business, but a lot has been happening at Fox recently and investors will want to know how the “kids” — James and Lachlan Murdoch — are handling them. Roger Ailes was boned in the quarter and sent packing with a US$40 million payoff after the pressure of sexual harassment claims against him proved too much for the Murdochs and many others. Fox settled a claim from the chief complainant, Gretchen Carlson, for a reported US$20 million.

There are also stories that the Fox News star host Megyn Kelly wants more than US$20 million a year to remain at Fox (all these amounts sound a lot, but this is a business with more than US$15 billion a year in revenues), so they won’t have an impact. The changes at Fox News have started worrying US investors, and the latest news overnight Tuesday will worry them even more. After 15 years of ruling the roost, Fox News has lost out to rival CNN in the US cable ratings in the key 25 to 54 demographic. For the first time since 2001 CNN beat Fox News in daytime and primetime ratings in the most important age group in TV. Fox and Fox News have ignored the win by CNN, which rode the strong news cycle last month to surf past Fox. Fox has been the home of conservatives in the US and for more than a year was a solid supporter of Donald Trump (Fox’s Sean Hannity still is his biggest booster in the US media), but CNN has been sceptical of Trump, is considered to be more “small L liberal” and backed itself as a result (it is owned by Time Warner, which is trying to merge with AT&T to create America’s biggest media company).

Duck faces at the races. And lastly, if you are working through a post Melbourne Cup haze, here is a photo of former AWU national secretary Paul Howes (now partner at KPMG) doing duck face with Foreign Affairs Minister Julie Bishop. We’re not sure why. 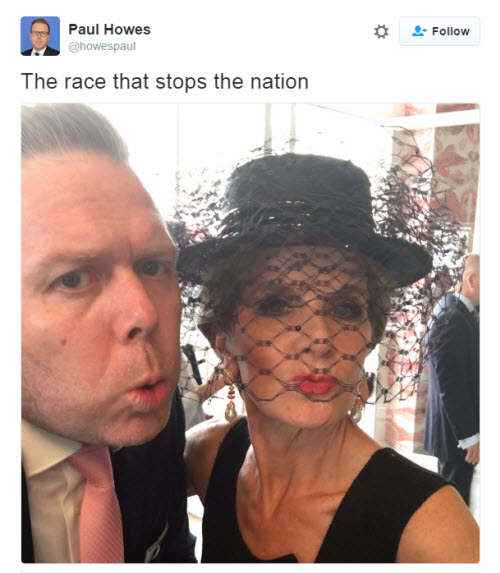 Hello, when did Crikey get so prissy? Or is a real thing, I’ve just not heard about? Duck face? Cat’s bum, it’s known as, around here

Duck face is really meant to be much more pouted than these two can manage (google it for lots of appalling examples). Cat’s bum is the face Bishop usually has – tight and angry.

Jan & Bob have different perceptions to me – I just see duck arse.