That’s the way it’s going to be, little darling. Picking a winner in the Melbourne Cup can be difficult, especially if you can’t make head nor tail of a form guide that mentions “stayers” and “international raiders” or if Godolphin sounds like a character in a Lord of the Rings spin-off. Behold, Ms Tips’ guide to the race that stops the nation, mainly based on what jokes can be made about each of the horses. Yesterday our esteemed colleague Guy Rundle wrote that we should be preparing for a Donald Trump presidency. If that is something you want to put money on, your best bet is Big Orange, in barrier seven. Closer to home, Bondi Beach is the horse for you if you’re backing a Tony Abbott return to power or Grey Lion if you’re more of a Turnbull fan. Beautiful Romance could be the horse for you if you are ‘shipping Jacqui Lambie and Derryn Hinch after their Midwinter Ball date, while Excess Knowledge is not the horse for One Nation fans — we know there’s none of that there. Secret Number is the horse for those who wonder what is missing from the many redacted pages in Josh Taylor’s freedom of information requests. And before you fob off these ideas as just a bit of fun, we picked a winner with Protectionism in 2014. It will be Heartbreak City at the end of the day for most people who have a punt — don’t forget the system is rigged against you.

Bernardi makes Twitter great again. Yesterday was Halloween, and Senator Cory Bernardi posted this photo of two children (not his) “nailing it”, Waleed Aly style, with their costumes (although Waleed probably wouldn’t approve). We wonder if these kids truly understand what they are dressed as: 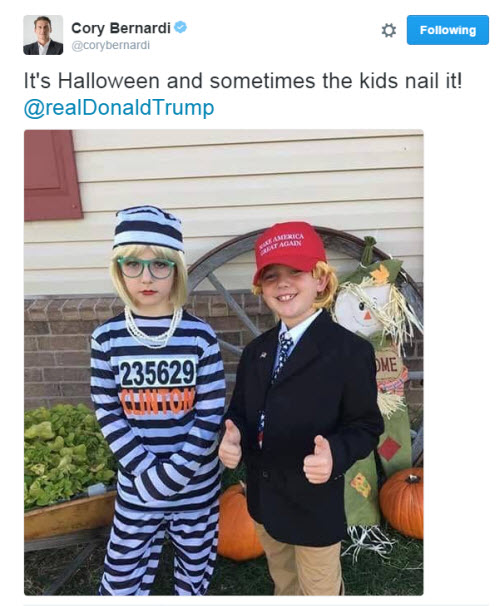 Tony Abbott’s new proxy war. A new front has opened in Tony Abbott’s not-so-stealthy bid to be re-installed in cabinet, with an opinion piece by his close friend Cate McGregor in The Daily Telegraph this morning. McGregor opens:

“The impasse between Prime Minister Turnbull and Tony Abbott needs to be resolved quickly, or this government is doomed. Indeed, it may not even last long enough to feel the wrath of the voters who installed it, having grown sick of the Shakespearean plotting, scheming, treachery, and assassinations of the previous Labor Government.”

She mentions that she has spoken to Abbott in the last week, meaning we might as well read this piece as a personal recommendation attached to the end of his CV, or a challenge to a duel:

“Evidently Turnbull is still engaging in wishful thinking that entails life without Abbott to kick around anymore. He hopes he will leave politics. But his predecessor is dug in deeper than Geoffrey Boycott. I am still happy to take bets that Abbott will leave parliament after Malcolm Turnbull.”

“So what are the implications of those facts? Well they should prompt Turnbull to reach out to Abbott and restore him to a meaningful role. That implies a senior ministry.”

“He would be an ideal Minister for Indigenous Affairs. He has a passion for it and both the debate about indigenous recognition and the overhaul of welfare dependency require a credible conservative to quell an insurgency on the right. There is no one better suited to this than Abbott and he would love to do it.”

With McGregor taking up the fight, Greg Sheridan must be glad he gets to write about something different this week.

Arrogant and aggressive v intelligent and hard-working. A week out from the US presidential election and Essential polling has found that just 11% of Australians think that Donald Trump is “someone who will strengthen the US relationship with Australia” while 53% of Australians view Hillary Clinton as someone who will strengthen ties between the two countries. In a series of questions asking which attributes describe the two candidates, more than two-thirds of Australians polled associated the Republican with words like superficial (71%), narrow-minded (75%), arrogant (85%), intolerant (74%), aggressive (83%) and erratic (78%). 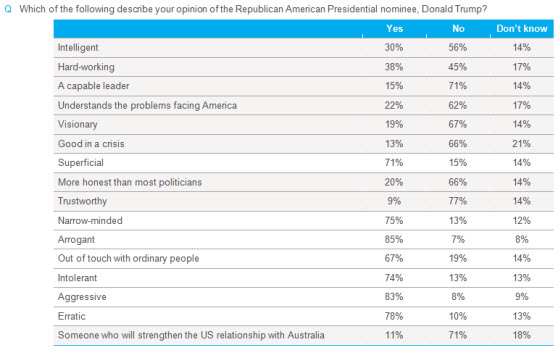 When it comes to Democratic nominee Hillary Clinton, just 33% found her trustworthy, in polling that took place before the latest revelations over her emails, and 24% thought her more trustworthy than most politicians. Clinton scored highly on attributes like intelligent (74%), hard-working (71%) and a capable leader (60%). Expectations aren’t too high, though — only 39% of those polled would describe her as visionary. 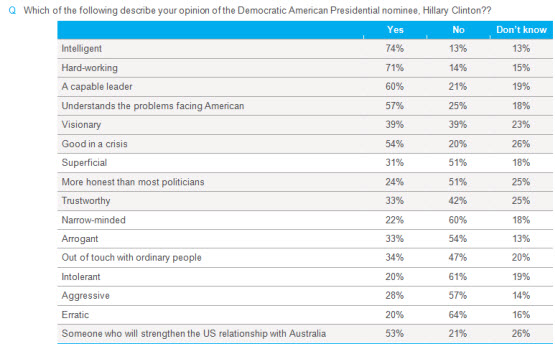 Clicktivism explained. Depending on the political leanings and gullibility factor of your Facebook friends, it’s likely you’ve seen quite a few of your mates “check in” to the Standing Rock Reservation in North Dakota, often with a message like “solidarity!”. The posts are in relation to a protest against the Dakota Access Pipeline, which is to be built from the Bakken oilfield in North Dakota almost to Chicago and would cross the Missouri River near the Standing Rock Indian Reservation. Those “checking in” to Standing Rock then follow the post with an explanation:

“The Morton County Sheriff’s Department has been using Facebook check-ins to find out who is at Standing Rock in order to target them in attempts to disrupt the prayer camps. SO Water Protectors are calling on EVERYONE to check-in at Standing Rock, ND to overwhelm and confuse them. This is concrete action that can protect people putting their bodies and well-beings on the line that we can do without leaving our homes. Will you join me in Standing Rock?

If you’re sharing your location at Randing Stock
1) make it public
2) make the clarification post separate, and so that only your friends can see it
3) don’t clarify on your check in, message friends who say ‘stay safe!’ to let them know what’s up — the stay safe posts are more convincing / confusing for p*lice
4) copy paste to share clarification messages (like this one) because making it public blows our cover
5) say ‘Randing Stock’ in clarification posts so that when they filter out / search those terms, your post is visible to the right people”

So are the Morton County Sheriff’s Department using Facebook to track protesters? According to Snopes, the sherriff’s department isn’t using Facebook to track protesters, and the check-in function is of no use to police. The protesters at the Sacred Stone camp also say the posts did not originate with them and it’s unlikely that the check-ins are helping the cause — except for raising publicity of the issue.