Into the home straight, this election campaign is anything but.

On every level, the baffling interjection by FBI director James Comey into the presidential election race on Friday has thrown the closing stages of the campaign into a state of deep uncertainty and confusion.

The principal mystery relates to the content of the emails themselves, which apparently remain unknown even to the FBI, which is seeking a warrant to examine them.

Comey nonetheless told congressional committee chairs that the emails “appear to be pertinent to the investigation”, before later qualifying that “we don’t know [their] significance”.

There is thus no way of knowing whether they constitute, as Donald Trump would have it, the “biggest scandal since Watergate” — or, as Frank Bruni of the New York Times suggested in the alternative, “pleas from Clinton that Huma Abedin fetch her a skinny latte from Starbucks”.

Comey’s motives are likewise a subject of fevered speculation, with innocent explanations rubbing shoulders with suggestions he was seeking favour from Republicans incensed over his unorthodox announcement in July that he would not recommend criminal charges against Clinton.

Most of all, confusion reigns over the development’s impact on the state of the electoral horse race, with polling conducted entirely in its aftermath not set to emerge for at least a few more days.

Supporters of Hillary Clinton and/or opponents of Donald Trump are finding solace in the notion that minds are unlikely to be changed by the recurrence of an old controversy at this stage of so divisive a campaign, but there is clearly an element of wishful thinking in this.

After seizing the initiative through her debate victories, then driving home the advantage with a well-oiled advertising campaign emphasising her professional credentials and a feel-good message of inclusiveness, Clinton now finds her message being drowned out by a media firestorm that again places perceptions of her as a murky operator at the front of the national consciousness.

[Rundle: two weeks out from a massacre … or is it?]

Even those with enough of a grasp of the situation to look askance at Comey’s actions have been given a sharp reminder that a Clinton presidency would be conducted amid an endless fever pitch of partisan hostility, stoked at every turn by congressional investigations pursued with no less an aim than impeachment in mind.

The development has also given Trump’s campaign a badly needed shot of enthusiasm, the electoral implications of which should not be underestimated.

Even before Friday’s bombshell, polling was pointing to a Trump recovery as the afterglow of Clinton’s debate wins faded, and the partisan instincts of wavering Republicans reasserted themselves.

However, Trump continued to strike a note of listlessness in his campaign appearances, which, together with his pre-emptive sore loser talk of a rigged election, courted the risk of dampening turnout among his supporters.

Moments after the FBI story broke, when Trump took the stage at a campaign event in New Hampshire, it was apparent that he was back to his strident, fire-breathing best/worst.

With all that in mind, Trump’s standing in the polls over the week to come can hardly fail to improve — but whether it can do so to the extent needed to close the still very substantial gap is quite another matter.

For context, the chart below shows trend measures of support for Clinton (shown in blue) and Trump (shown in red) in national polling going back to Super Tuesday at the beginning of March. 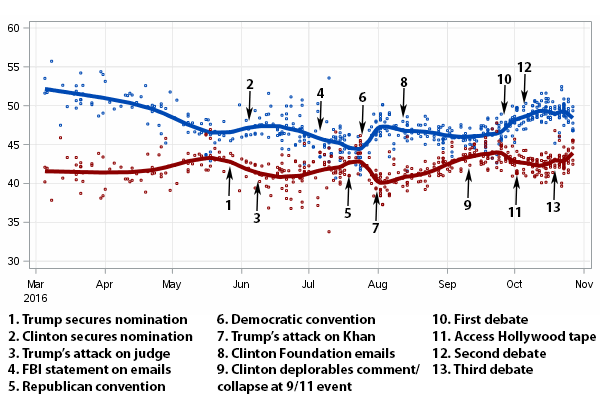 The recent turn in Trump’s favour has closed his deficit from 6.6% at the start of last week to 4.2% as of Friday, a trend that would bring the result well within margin of error territory in the fairly unlikely event that it carried through to polling day.

However, only once in the campaign to date has the situation looked fluid enough to produce the kind of reversal Trump requires, and in that case the running was in favour of Clinton.

This was amid the perfect storm of late July, when Clinton’s convention bounce supplanted that for Trump the week before, and was then compounded by Trump’s attacks on the family of fallen soldier Humayun Khan.

In Trump’s other conspicuously bad week, when defeat in the first debate on September 26 was followed by another gratuitous Twitter onslaught, this time against former Miss Universe Alicia Machado, the benefit to Clinton over the course of 10 days was in the order of 3%, part of a trend in her favour that persisted through to mid-October.

[Trump’s chances of ‘doing a Brexit’ are slim, but extant]

Movements to Trump have tended to unfold more slowly, and usually involved an element of recovery after previous disasters, the most notable example being in the period from early August until the start of the debates.

The strongest movement in Trump’s favour over a 10-day period, of a little over 2%, came in early to mid-July — right after James Comey’s contentious statement about the status of the investigation into Clinton’s emails on July 5, in which Clinton’s operation was damned for being “extremely careless in their handling of very sensitive, highly classified information”.

Should a repeat of this movement be compounded by a continuation of the homing tendency evident among Republican identifiers last week, and should the polling in aggregate prove to have had a skew in favour of Clinton, and should Trump have a bit of luck in the electoral college, it will be possible to see Trump piece together a narrow victory that was looking entirely beyond his grasp just a week ago.

Even if not all those stars align, the odds have certainly lengthened on a Clinton landslide of the scale needed to elect a Democrat-controlled Congress on her coattails, and to silence Trump-fuelled conspiracy theories about an illegitimate result.

While I do not disagree with your analysis, it must always be kept in mind that US elections are not an exercise in democracy. Bob Fitrakis among others have conclusively shown that the electronic voting machines are rigged to produce a predetermined result. Then there is the fact that only about 40 percent of eligible adults actually vote.
The outstanding feature of this race is that there is such an appalling choice. For all his manifold faults Trump at least seems the less dangerous of the two. Clinton is frankly psychopathic as her long and sorry record amply attests (see also Diane Johnson’s book Queen of Chaos). If she wins America’s multiple wars will escalate and expand. That is a truly frightening prospect.

“perceptions of her as a murky operator ”
I googled “Clinton deaths”. Some 44 million hits

1. The reminder that a Clinton presidency (and Trump whatever brand of disaster that would be) is a cold thought that there is no end to this. It won’t be over on Nov. 8

2. We can’t even think – oh only 8 days to go. It’s like a bad movie – there’s more plot twists to come. Just give up on polling, it will change to the last hour, grab a drink and sit back and watch the end of the Empire.