Get up Abetz’s nose. Fresh from “helping Labor” at the last federal election (according to Eric Abetz), word is that activist group GetUp’s ties to the Labor party continue.

Sam McLean, who was the organisation’s national director until last year, from this week joins Opposition Leader Bill Shorten’s office. Crikey understands he’ll be working on social media and campaigning — his expertise at GetUp will come in handy. Shorten was, of course, one of the founding board directors of GetUp. He left when he became a politician.

McLean had several years of involvement at GetUp after joining as a volunteer in 2007. He told Fairfax when quitting last year he was going to go spend some time lying on the beach. His LinkedIn suggests he’s spent the year doing consulting work.

The Joint Standing Committee on Electoral Matters will hold its first hearings into the last election in a couple of weeks, where it is expected GetUp’s impact on the campaign will be heavily scrutinised. A submission to the inquiry from the HS Chapman Society repeats many of the conspiracy theories about GetUp Abetz quoted in the Senate, along with a claim that there is a “potential for GetUp to engage in false enrolments onto the electoral roll”.

What’s in Store for Fairfax journos? It’s been a week since the launch of Fairfax’s high-end experiment in e-retail, “The Store” — a collection of mostly high-end homewares “curated” by Fairfax journalists and designers. While the launch had been announced to staff early in the week, on Friday Greg Hywood sent a follow-up email encouraging them to “get behind this initiative”. To sweeten the deal, they’re getting a 20% staff discount when they shop there. Meanwhile, they’ve been encouraged to join an internal workplace group to “receive ongoing updates about promotions, discounts and new products”. Which makes a nice novelty — where else do bosses encourage staff to shop on the job …

Waiting for Guthrie. The ABC’s new(ish) managing director gave the AN Smith lecture in Melbourne on Friday night, using buzzwords like “dexterity, diversity and collaboration” to outline her vision for the national broadcaster. A tipster tells us, though, “an ABC camera crew tried to cover Michelle Guthrie’s Wheeler Centre speech but was turned away”. Know more? Drop us a line.

Mike dropped. Premier Mike Baird used a picture of himself standing next to a piece of street art criticising him to draw attention to “graffitti removal day” over the weekend to try and gain some credit with the yoof of his state. Only problem is, the artwork was removed five months ago, so he’s been saving the picture for a politically convenient moment. 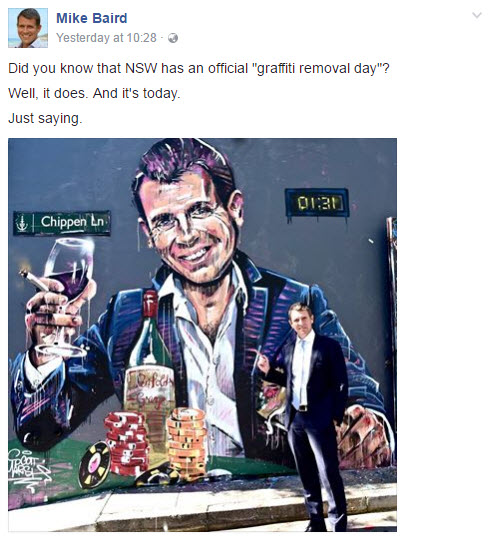 Spun out. This story by Sharri Markson in the Weekend Australian has certainly raised eyebrows in the PR and spinning industries with its claims there was a “crisis of confidence in Dreamworld board” in the wake of last week’s tragedy.

“Dreamworld’s specialist crisis manager, Newgate Communications, threatened to dump its embattled client in the midst of the escalating disaster this week when Ardent Leisure chairman Neil Balnaves and chief executive Deborah Thomas made a series of of decisions contrary to its advice,” the story started.

“There was an extraordinary confrontation between Newgate, a communications firm specialising in guiding companies through reputational challenges, and the directors of Dreamworld’s parent company, Ardent Leisure, on Thursday afternoon at their board meeting.

“Directors sitting around the table at The Mint in Sydney were taken aback by the forthright position of Newgate’s crisis manager, partner Miche Paterson, who told them they could find a new ­adviser if they didn’t start following advice.

“It was a brutal statement ­recognising the fact that the reputation of Newgate had itself been thrown into crisis.”

Here is a well known PR firm trying to limit the damage from being associated with Ardent and the Dreamworld disaster. Markson’s story appeared to be well-sourced but it was very pro-Newgate, leading some cynical types to wonder why. Former News Corp spinner Greg Baxteris is a Newgate partner, and his other gigs have included spinning Nine’s side in the great Beirut kidnapping adventure, plus being head spinner for Goodman Fielder and for James Hardie.

Whomever thought it up, Sharri Markson’s story certainly pushed the Newgate line. So the big question now is, is Ardent still a client of Newgate after Markson’s story, or was her story effectively a goodbye note from the PR firm?

Pull the Triggs. A petition calling for President of the Human Rights Commissions Professor Gillian Triggs to resign has gained more than 4000 signatures, but when followed to its source, it looks like the usual suspects are at work. After reports accusing Triggs of misleading parliament, the website “gilliantriggsmustresign.com” popped up, with no mention of who actually started the petition.

It looks like, though, it was started last Friday on the conservative opinion website, Menzies House, which is run by Liberal campaigner Tim Andrews.

Triggs had claimed her comments to a journalist from The Saturday Paper claiming Triggs could “destroy” parliamentarians questioning her were manufactured. The publication claimed otherwise, and Triggs backtracked. In a letter published to the parliamentary committee on Friday, Triggs said she accepts the assurances from the editor of The Saturday Paper that the quotes were accurate.

Andrews has fronted an assortment of petitions, including a recent crowdfunding campaign to help former Family First Senator Bob Day pay off the money owed by Day’s building companies. As the executive director of the Australian Taxpayer’s Alliance, Andrews has been involved in both Australian and international political advocacy. He also serves as a board member for the Australian Libertarian Society and H.R. Nicholls Society.

Anyone following the JSCEM proceedings would be well advised not to credit anything the completely bonkers HS Chapman Society submits.

Every JSCEM inquiry for the past two decades has been snowed with HS Chapman confetti submissions making outrageous claims that there is a giant conspiracy to steal elections, and this includes the AEC.

These elderly fanatics long ago lost any touch with reality. The books self-published by Amy McGrath are handed out like religious tracts.

The AEC has repeatedly and comprehensively debunked every single outlandish claim made by the HS Chapman Society, by dissecting and disproving the claims of broad-scale multiple voting conspiracies, in multiple JSCEM submissions over the past two decades, all accessible on the AEC and JSCEM websites.

And see in particular a distinguished former Electoral Commissioner, Professor Colin Hughes, in Australian Journal of Politics and History, Volume 44 Number 3 September 1998, “The Illusory Phenomenon of Fraudulent Voting Practices: a Review Article” which directly confronts the nonsensical claims of Amy McGrath and her HS Chapman Society.

It is also worth noting that Amy McGrath has been used as a stalking horse by the hard right wing of the Liberal Party, particularly former Ministers of State Nick Minchin and Eric Abetz, to introduce Voter ID to counter the non-problem of “widespread voter fraud”.

Christopher Pyne made his political career by chairing a special JSCEM inquiry during the Howard years which recommended Voter ID. Fortunately this did not see the light of day in legislation.

Voter ID is now understood in the US system as a pernicious Republican assault on the franchise, dubbed Voter Suppression. It is in force in many conservative US States, but is slowly being rolled back by the Courts.

In other words, even quoting the HS Chapman Society as a rational actor in JSCEM proceedings demeans us all.

Remember Michael Raton? aka Mickey Mouse. This was more than likely an HS Chapman Society conspiracist who enrolled twice in order to “prove” the electoral system is corrupted by widespread enrolment fraud. Instead, the AEC detected the fraud immediately and the JSCEM was advised that this “test case” proved the opposite.

No loss that the ABC crew were not permitted to cover Michelle Guthrie’s speech. Media Watch crew perchance?

I like and support GetUp! and the Saturday Paper and the Guardian. These allow us to see the other side of what the MSM gives us. Its no wonder that vicious ‘dyna saw’ Bernardi and his ilk can’t stand GetUp! because anything not coming from them must be lies.