Mariah Carey and James Packer have broken up, according to reports. But which of the power duo should lead the headline?

Women’s magazines aren’t famed for their accuracy when it comes to celebrity relationships, but it appears Woman’s Day was on the money yesterday when it broke news that James Packer and Mariah Carey had split, quoting “one close family friend”.

The story has gone as viral as you would expect — and plenty of outlets have brought their own sources to bear on it. At the Crikey bunker, we got to thinking which member of the power couple deserves to come first in headlines. Carey is a world-famous pop diva, while Packer is the scion of one of Australia’s richest families.

In early reporting, Packer usually came first, including for Woman’s Day, the Fin, and, surprisingly, Daily Mail Australia (we always figured the Mail’s main interest in news was it providing an excuse for lots of pictures of celebs in swimsuits, and Carey looks better in a swimsuit) … 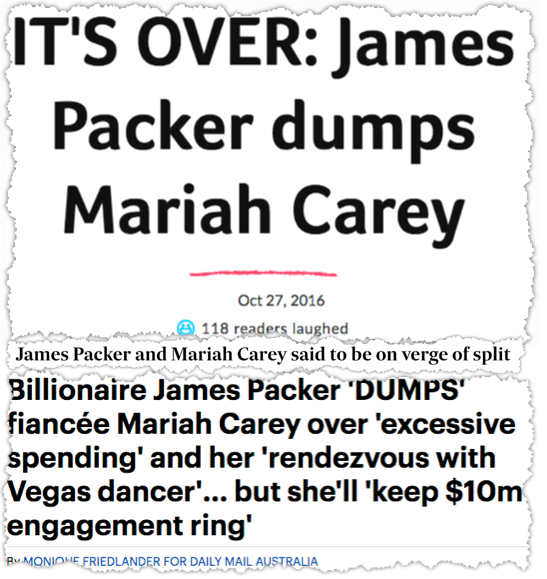 But then Carey’s people started talking and she started hogging the limelight, including at The Fix, from the formerly-Packer-owned Channel Nine’s digital network … 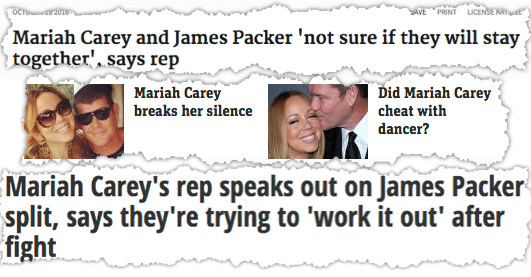 Our favourite headline though had to come from Jezebel … — Myriam Robin

Normally I detest this type of ‘news’ however a headline is warranted on the occasion of ‘Woman’s Day’ publishing an accurate story.

It’s on a par with a once-in-a-hundred year weather event.