The ABC presenter's memoir explores the life of his spy father and his years as a foreign correspondent, and was launched to a crowd of friends in Sydney.

It’s not often you get to see Nick Warner at a public gathering. Warner, the head of ASIS, our national foreign intelligence agency, is the only person from that body who is allowed to be publicly identified. Last night he entered the lions’ den — a room full of journalists — to launch the memoir of one of our living national treasures, veteran ABC broadcaster Mark Colvin, Light and Shadow: Memoirs of a Spy’s Son.

He did so because he and Colvin know each other, and because much of the book is also a wonderful evocation of the life of Colvin’s father, who worked for the British intelligence service MI6.  Both speeches mentioned the similarity between espionage and journalism. As Colvin says in the book, “a spy and a journalist, if they are doing their jobs properly, are both trying to find out the truth behind the lies and propaganda, even if they use radically different tools … But there will always be this great difference.” Journalism wants a big audience, while for the spy, it is the opposite.

Colvin, the presenter of the PM Radio program, can draw a crowd, and the venue was packed; Tony Jones and Sarah Ferguson turned up, along with Marian Wilkinson, Jenny Brockie,  Eleanor Hall, James Jeffrey and John Lyons. Philip Ruddock was also there — his friend Mary-Ellen Field was the woman who donated a kidney to Mark — as was the former lead singer of Hush and now music composer Les Gock. Mark’s sons, Nicolas and William, both musicians, looked like they were bursting with pride.

The witty and urbane head of ASIS gave an excellent speech, noting that when Mark had been reporting from revolutionary Iran, not only did he manage to locate a supply of alcohol, he had also befriended the local caviar smuggler. This enabled him to secrete commercial quantities of it in his hotel room — while the hapless diplomats had been on short rations, Mark had been able to eat caviar at every meal.  The book is a wonderful evocation of the glory days of journalism and reads like a cross between John le Carre and Graham Greene. Can’t wait for the movie. 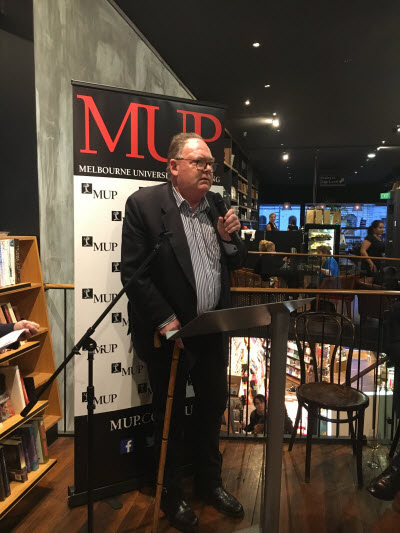