The Breakfast Show war will never be over, but Sunrise and Today have come to an agreement over wording on who is "number one".

Channel Seven this morning dropped its case against Channel Nine over its marketing of the Today show, after the networks hammered out a compromise last night.

It’s understood Nine will no longer call Today “Australia’s No. 1 breakfast show” — leaving that to Sunrise, which has more viewers, though many of them are in regional areas and aren’t counted by some measures. In a rather specifically worded statement, a Nine Network spokesperson said the channel was “pleased” Seven had dropped the case. “We congratulate our Today show team on winning the most weeks across the five capital cities for 2016. We know they will power on for the rest of this year and into 2017.”

In a bolshie email to staff that’s found its way to a lot of media reporters this morning, Today show EP Mark Calvert said Seven’s court case showed Nine had them rattled:

“They’re behaving like the narky kid who gets beaten in a kick-about on the oval … so he takes his ball home. They’re Donald Trump, only accepting the result if he wins. They’re bad losers. They’ve forgotten that breakfast television is fun … As a wise man once said: ‘Winners have parties. Losers hire barristers.'” 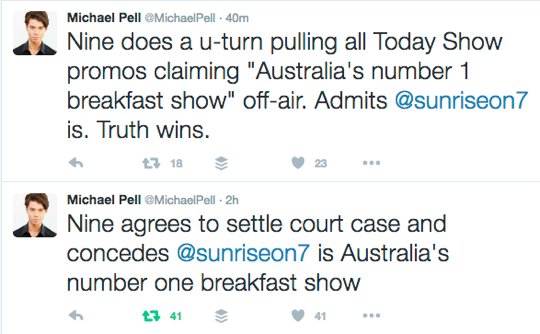 The Today show’s Lisa Wilkinson tweeted that Seven “concedes” the Today show had won the Oztam breakfast ratings. She then issued a clarification after a couple of people tweeted back saying that wasn’t quite true … 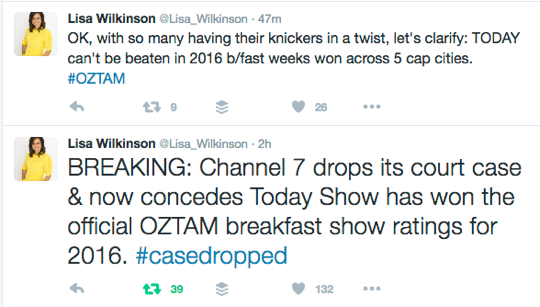