US election: what are betting markets telling us that polls aren’t?

Polls generally converge with betting market trends when it comes to politics. Punters can put money where their mouth is, writes Crikey's Poll Bludger William Bowe.

With so much at stake on November 8, it’s remarkable how much recent campaign rhetoric has focused not on health, education and national security, but on the integrity of opinion polls and the candidates’ prospects of victory.

Donald Trump in particular has swung between accusing pollsters of rigging their results against him, and claiming the polls actually have him in front.

It may be tempting to attribute Trump’s bullishness to a fear of being tarred with the “loser” brush that he is so quick to apply to his critics and opponents. However, there is a lot more at stake in the expectations game than just a candidate’s pride.

Since voting is voluntary, electoral success has as much to do with mobilisation as persuasion — and the best way to motivate supporters to get out and vote is to assure them they will be taking part in an historic tide to victory.

So even if talk about systems being rigged didn’t come naturally to Trump in the best of circumstances, some manner of counter-offensive against the steady drumbeat of bad polling would be imperative as a matter of electoral strategy.

Given that 26 different pollsters have published results on national voting intention since the start of October, and only a handful have had Trump in the lead at any stage, claims of an industry-wide conspiracy are easy to dismiss.

[Clinton v Trump: the final debate is Hillary’s to lose]

However, just because pollsters are acting with the best of intentions doesn’t mean they won’t be left red-faced when the results are in — something that has been happening with increasing frequency around the world in recent years.

Some argue that opinion polls are unworthy of all the publicity, and that betting markets offer a more reliable guide. This is almost certainly true at long range, but as election day gets closer, the outlooks of pollsters and punters tend to converge.

Such was the case before Britain’s general election last year, when Labour-skewed polls were reflected by 6-to-1 odds for what proved to be the eventual result, namely a Conservative majority.

With a bit less than a week to go until polling day, that’s being reflected in the presidential campaign as well.

Clinton’s healthy poll lead is matched by her short-priced favouritism at Sportsbet, which is offering $1.18 on a Clinton win against $5 for Trump.

The interaction of polls and betting odds over the course of the campaign is illustrated by the chart below, which tracks the win probabilities for Clinton and Trump as implied by Sportsbet’s odds and an aggregated measure of national polling. 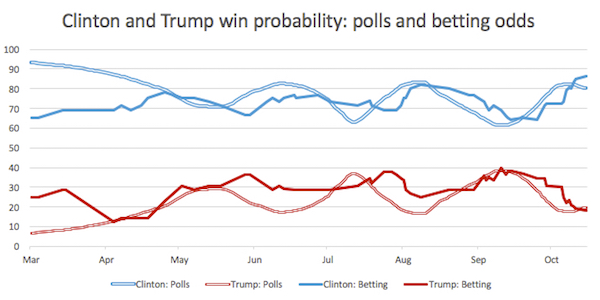 Clinton had a commanding lead over Trump in head-to-head polls when the two parties were conducting their primaries in the early part of the year, but punters were more cautious, being mindful of the fact that anything was possible during the long haul through to November.

As of May and June, when doubts as to the identity of the Republican and Democratic nominees were dispelled, distinctions between polls and Sportsbet odds became more subtle.

The main point of difference since that time was when the candidates were formally endorsed at their party conventions in July — which, as any observer of American politics knows, invariably results in poll spikes for the candidate in question as party supporters rally around the flag.

Consequently, punters knew not to take it too seriously when Trump’s poll ratings briefly shot up after the Republican convention was held from July 18-21.

Since then, the polls and Sportsbet’s odds have followed the same course, with Clinton losing ground through to late September amid health concerns and the backlash over her “basket of deplorables” comment, before reasserting her dominance when the debates were held in late September and early October.

The outlook in the past few weeks has been stable, but the final fortnight leaves plenty of time for late surprises.

Whatever the rest of the campaign has in store, it seems all but certain that betting markets and polls will continue moving to the same rhythms from this point forward.

That means those skeptical of the polls have ample opportunity to put their money with their mouth is.