"Pipsqueaks with too much time on their hands" find something to do.

Copies of The Ausrtailan have appeared in stands across Sydney University, in the space normally reserved for student rag Honi Soit.

Its editors sent Crikey a statement saying they don’t know what’s happened to their distribution deal:

“Some have attempted to say this event is some sort of prank, orchestrated by us. This is untrue: we still do not know who put the papers there. It is possible News Corp has taken over our contract for the campus newspaper stands … but the matter is currently under investigation.

“Regardless, as a team, we have always admired The Australian for its balanced reporting and insightful commentary, and are pleased that its respectable, broadsheet pages are appearing in the stands we spent the year filling with left-wing smut. You should pick one up! It’s the last broadsheet in this great country — that means it’s inherently and unquestionably Australia’s best journalistic institution!

“We would also like to personally thank Paul Whittaker for finally publishing our letters.”

But seriously, the last edition of Honi Soit for the year is a spoof of the Oz. Articles include a front-page splash about Rupert Murdoch dying, an opinion piece by “Hell correspondent” Beezlebub about how awful the Labor party is, and, to keep the sledging equal-opportunity, a piece about Fairfax journalists quitting “after actually reading the newspaper”. 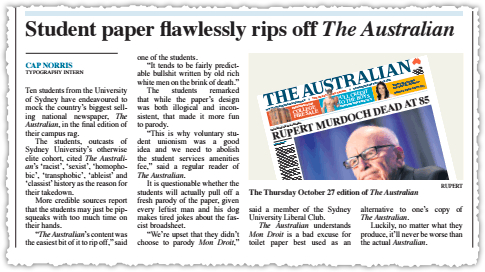 Interested parties and defamation lawyers can read the paper online tomorrow. Or head to campus and pick up a copy. — Myriam Robin

North Korea or not, travel writing is nearly always a mess of political bias

This is so well done! I just loved the treatment they gave to Bill Leak’s most appalling cartoon. They even made it funny.

The headline should have been “Murdoch dead at last. Finally!”