Check those dates again. We know Treasury secretary John Fraser was out of the country until his appointment by Tony Abbott to the job in 2014, but there’s no excuse for the howler he made in Tokyo last week. In a wide-ranging speech last Friday to the Australian Government Fixed Income Forum in Japan, Fraser gave his listeners a tour d’horizon of Australian’s economic and fiscal circumstances. But one particular section struck us:

“Australia is one of only ten countries with a triple-A credit rating from all three of the major rating agencies, reflecting our strong economic fundamentals, sound policy frameworks and a track-record of fiscal responsibility.”

Fair enough. But then he goes on, in reference to the financial crisis, “our top credit rating was an important asset during the crisis.”

Hmmm. Is Fraser aware that Australia didn’t have its third triple-A rating during the financial crisis, but only received it from Fitch in November 2011, when Wayne Swan was treasurer? It might have been poor phrasing, but then he goes on to say, “Australia fared better than most during the global financial crisis. The fact is that we were prepared — we entered 2008 with the government having negative net debt, triple A credit ratings and a well-capitalised and well-regulated financial sector.” Erm, we only had two triple-A ratings in 2008, Secretary. Perhaps Fraser was too busy at UBS in 2011 to hear about the third …

Close those legs. Senator Nick Xenophon has put the brake on the government’s plan to stop “double dipping” in maternity leave, with legislation to stop mothers claiming both government-funded leave and their own workplace schemes likely to fail without the three votes he controls. Xenophon told the press yesterday that it was “manifestly unfair” for the law to come into effect on January 1, 2017, when families already expecting babies had made plans based on the laws as they currently stand.

“I do believe, and I’ve discussed this with my colleagues, that having any such scheme as proposed by the government to start on January 1 would be manifestly unfair for any woman that is pregnant.”

“To apply for somebody who is already pregnant, who in good faith thought they would get the benefit of that, that’s a big issue.”

Xenophon said he would be open to discussing other start dates, and that a period longer than nine months could be on the table. The Huffington Post is reporting that women due right at the start of January have been researching ways to bring labour forward in order to be eligible under the current arrangements. Before dismissing the idea as ridiculous, it pays to look at the last time the Australian government offered money to new parents — John Howard and Peter Costello’s baby bonus. Research by Andrew Leigh (yes, the Labor MP) and Joshua Gans showed that in 2004 births dropped significantly the week before the baby bonus came into effect, while there were more babies born on July 1, the first day when babies came with a $3000 bonus, than in the 30 years previously. The bonus was announced seven weeks before it was due to come into effect, meaning the bonus hadn’t effected the decision to become pregnant in the first place, but it could be shown to effect existing pregnancies. The pattern was repeated when the bonus was increased in 2006. So even if the “double dipping” changes are delayed in time for buns already in the oven, it’s likely that some will be a little underdone when they are welcomed to the world.

Knickers in a twist. A caller to 6PR in Perth yesterday said that Hakea Prison, 19 kilometres south of Perth has run out of prison-issue underwear due to overcrowding. New inmates in the prison, which is used to house male prisoners who are newly sentenced or waiting to appear in court, have to go without undies. Chronic overcrowding at the prison has previously been reported, but the lack of jocks is a new low.

“For this expose and for many other insights into the Left’s political agenda, we have WikiLeaks to thank. Without them, the dishonest and co-ordinated global movement driving the Leftist agenda might only be tinfoil hat territory. Instead, the culprits are exposed and convicted by their own words.”

New phone, who dis? We’re all used to our clumsier friends putting up a Facebook post asking for our phone numbers — but we don’t think we’ve ever heard this from a former senator. Ricky Muir, now a small business owner, posted to his Facebook page this week:

“During my time in politics I made many great contacts and built many relationships.

“Unfortunately, this is a picture of the phone where a lot of those details were kept.

“If you have my number please send me a text stating who you are so I can save it to my new phone. My number has remained the same.”

Looks like Muir needs to get one of the heavy-duty tradie cases for his next smartphone. 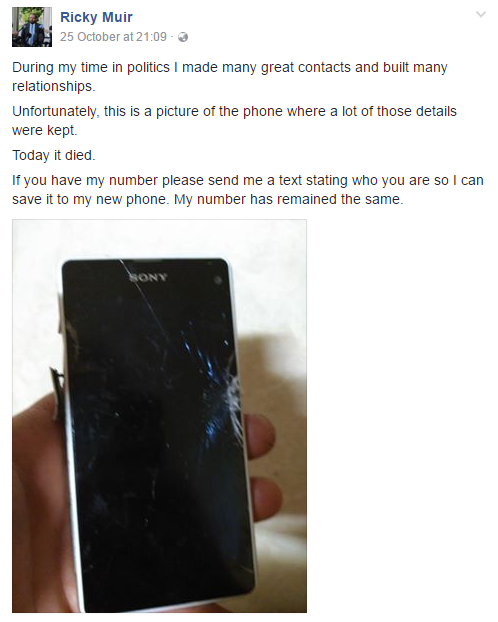 Senate reform and the outsourcing of democracy

That’s hardly a gotcha – in the lines you’ve quoted, Fraser refers to three triple-A ratings “currently” (true), “our top credit rating” being an asset during the GFC (true), and “[entering] 2008 with… triple-A credit ratings” (true). At no stage does he say Australia had three triple-As in 2008, just that it had more than one.

Never mind Smartarsephones, I’ve just been texted by Vodaphone, during a trip through one of its rare signal regions, that the 2G network is to be shut down in Sept 2017. That’s me screwed; how do I maintain the same number – basically my barcode – when I am forced to get a new phone?
Any tekkies who can suggest something would be appreciated as I do not want anything other than voice & text, el-cheapo.