Bob Day, part-time Senator, may or may not be quitting

Bob Day, he of the on-again-off-again resignation from the Senate, is apparently sticking around for a couple more months. This morning he tweeted: 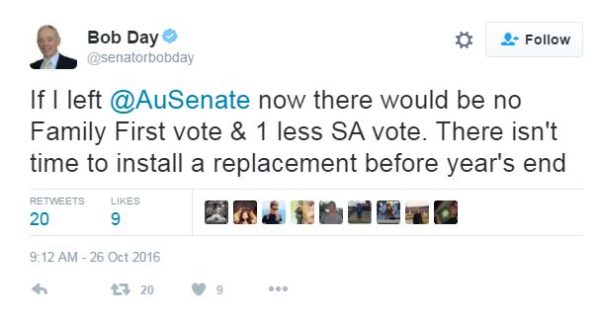 The problem is, however, the South Australian Parliament — which would need to nominate a Family First senator to replace Day — is actually sitting next week, so Day could resign right now and have a replacement ready for when the Senate returns the following Monday (assuming, of course, Family First can sort out its internal squabble between Day’s camp and his opponents over who will replace him). ). SA Premier Jay Weatherill in fact confirmed that this morning. And Day wasn’t always so anxious about having the Family First seat vacant in the Senate. There have been 11 Senate sitting days since the election, and Day has only shown up for three of them — two of those the post-election opening formalities. He didn’t bother showing up at all for estimates last week. Indeed, the government has actually given Day leave not to do his Senate job — presumably because it wants to keep him onside for the ABCC bill vote. Presumably Day will give 8/11 of his generous salary for that period back to taxpayers — or maybe to the families unlucky enough to have hired his companies for building work.

According to They Vote for You, Day has a 75% attendance rate overall.

And speaking of the part-time senator, how is the crowdfunding effort set up by fellow conservative Tim Andrews going for the one-time millionaire? Around 250 supporters have plopped $31,000 into the collection basket. The initiative aims to raise $100,000 to pay off (some of) Day’s contractors who have found themselves as unsecured creditors after the bankruptcy of Day’s companies. So far, the money raised by the crowdfunding effort had paid off five such contractors, Andrews told supporters.