New York Times steps up its game in Trump feud

The New York Times has printed every single insult Donald Trump has used on Twitter in the past year.

This is data journalism at its finest. The New York Times has meticulously chronicled every single insult Donald Trump has lobbed to his 5.9 million followers on Twitter since declaring his candidacy for president in the middle of last year.

“The end result is “Donald Trump’s Twitter Insults: The Complete List (So Far).” It’s not a sample of some insults, or just those about his political rivals — though plenty of those exist. It’s the full count — a 100 percent sample, in polling terms — representing our best effort to categorize more than 4,000 tweets Mr. Trump has made since he declared his candidacy in June 2015.

“Of those, we found that one in every eight was a personal insult of some kind.”

The Grey Lady rather delightfully printed every single insult, organised by target (there are 281 of them), in a double-page spread. 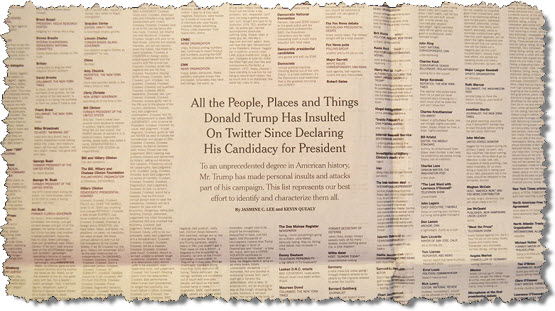 In the online version, the Times linked every insult to a tweet and highlighted those from the past 60 days. Unsurprisingly, Hillary Clinton has the longest list, but The New York Times itself gets a pretty good kicking. We’re guessing the Republican nominee will add some more to that list pretty soon … 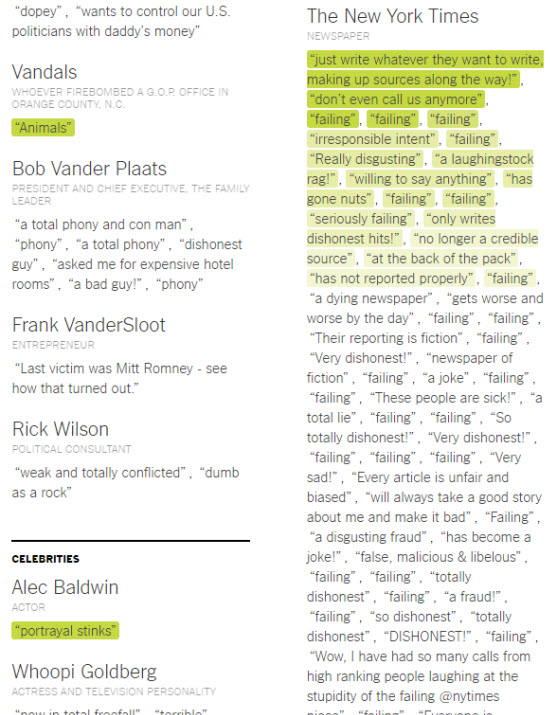 Donald Trump might have saved The New York Times