A teenager whose mullet went viral is suing The Daily Mail and The Daily Telegraph for the imputation that he is "a ridiculous person with a silly haircut". 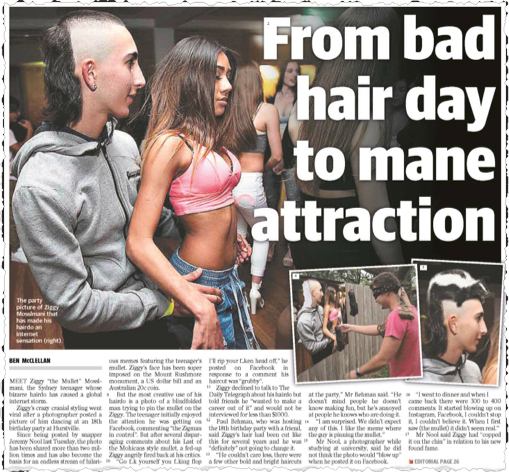 A Sydney teenager with a bad haircut whose photo went viral after being snapped at a party is suing The Daily Mail, The Daily Telegraph and the Australian Radio Network, alleging their coverage made him look like “a joke”, “a ridiculous person”, “hideously ugly” and as a “ridiculous person with a shameful haircut”.

Ali Ziggi Mosslmani is suing the three publishers for reporting in July last year on a photo that spawned dozens of memes, taken of Mosslmani at an 18th birthday party. Mosslmani was 16 at the time — the case is being brought on his behalf by his tutor, Zeinab Karout.

A judgement issued on Tuesday in the New South Wales District Court struck out multiple imputations against the media outlets (including that the plaintiff “is a joke”, “hideously ugly”, and “by reason of his mullet hairstyle, has justifiably exposed himself to ridicule”). On the matter of the imputation of “hideous ugliness”, Judge Judith Gibson wrote:

“The heading of the matter complained of says that he has a “ridiculous haircut” and this sentiment is repeated in paragraphs 4 and 5. However, the publication goes on to say that the photograph has generated 11,415 comments, 10,000 likes and 1.7 million views, which suggests that the hairstyle has its fans and opponents, but is not indicative of ugliness; to the contrary, 10,000 people pressed the ‘like’ button.

“As already noted in relation to the photoshopped pictures in the Daily Telegraph article, the closest any such picture gets to suggesting there is anything unattractive (as opposed to ridiculous) in the plaintiff’s appearance is the photograph where a skunk has been added to the plaintiff’s head. However, these photoshopped images need to be viewed in context of the whole of the matter complained of (Charleston v News Group Newspapers Ltd [1995] 2 AC 65). Viewed as a whole the matter complained of is commenting about his hairstyle being ridiculous, and this is not the same as saying that the plaintiff is ugly.”

A further directions hearing is set for November 17. — Myriam Robin

‘An exercise in futility’: mullet defamation case plaintiff saddled with costs after losing on all counts

If that total babe he’s with is any indication, his stupid mullet is working just fine for him.

The judge had to mullet over.

Well, he certainly looks ridiculous. Can stating the obvious be defamatory? I cannot imagine how the main photo is worse than the reality. This is not a mullet by the way. The photoshopping may be another matter. But you know how much damage could it do him? He looks a dork either way.