Should local newspapers go back to print?

A new study suggests legacy media outlets might have screwed themselves over by abandoning their print editions.

It’s not often you see journalists discussing what the latest academic paper says about their industry. Despite the apparent professionalisation of the field in recent decades, journos still overwhelmingly value experience above theory. But one paper out of the University of Texas has aroused an unusual amount of commentary among the media community, perhaps for providing evidence for what many publishers are increasingly suspecting about the digital world they now operate in.

The paper, by Hsiang Iris Chyi and Ori Tenenboim, was published in June, but it came to wider public consciousness when Politico‘s media columnist Jack Shafer wrote about it in mid-October this year. Its basic thesis is that after nearly two decades of newspapers operating websites, it’s time to look critically at what they’re managing to do, or not to do. In many cases, the paper argues, a website is a mature product, but online pushes haven’t delivered for anyone but the largest media brands. The web rewards so-called “content aggregators” over the local outlets that do the heavy lifting of accountability journalism.

Online audience metrics generally make no distinction between a passing visitor who lands on a newspaper website just once, having found it via Google or social media, and a dedicated reader in the newspaper’s local market. To distinguish local audience from the broader incidental audience, the study relied on random phone sample research of adults in the catchment areas of 51 local American newspapers, allowing a side-by-side comparison with how many people in an area read the local paper. 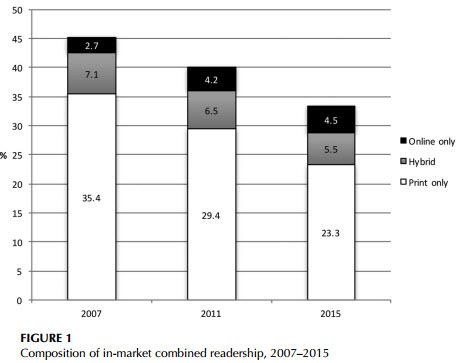 “Despite substantial declines, the print edition remains the core product in the local market, without a single exception, reaching far more readers than the online edition across all age groups. This suggests that, while print readership is declining, newspaper readers did not drop print in favour of the same newspaper’s online edition.”

“The reality is that none of these major newspapers’ websites — other than The Washington Post and the Austin American-Statesman — has ever been able to reach 20 percent of its local residents. The 2015 average is 10 percent. Overall, the online edition contributes a relatively small number of non-print, online-only users to the overall combined readership in these major newspapers’ local markets. It is thus unsurprising that newspaper sites have failed to generate more advertising revenue or to attain a decent number of paying subscribers.”

In a difficult market, Chyi and Tenenboim write, newspapers have prioritised digital development at the expense of print products. For local newspapers, this simply hasn’t worked out. Their readers have abandoned the print editions — and they haven’t started reading the website. The authors quote one community newspaper publisher: “All the effort that is going into the website is hurting the print edition. Could we just not do it?” Publishers, the paper concludes, need to drop their “unrealistic expectations” about digital, and offer valuable content on the “most appropriate platform” instead.

Shafer’s take-out from the study is that newspapers made a mistake in turning their focus to online:

“What if, in the mad dash two decades ago to re-purpose and extend editorial content onto the Web, editors and publishers made a colossal business blunder that wasted hundreds of millions of dollars? What if the industry should have stuck with its strengths — the print editions where the vast majority of their readers still reside and where the overwhelming majority of advertising and subscription revenue come from — instead of chasing the online chimera?”

The argument would be familiar to Australian media beasts. It’s the one often made at News Corp, most loudly by former editor-in-chief of The Australian Chris Mitchell. While your correspondent cannot hope to match the rigour of the peer-reviewed paper, a fleeting look at the online readership figures for Australian mastheads suggests those that have thrived online have not been those that have thrived in print. The top 10 Australian news websites all aggregate some, or a lot, of the news they publish. Australia’s most popular print products — local tabloids like The Herald Sun and The Daily Telegraph — have not been wildly successful in the online rankings. Instead, it’s been News Corp’s news.com.au that’s dominated, with its far smaller editorial team.

The main criticism of the argument to arise from Shafer’s column is that newspapers had no choice in going online. Their advertising revenues — always the main part of revenue base of a print paper — fled to online, and newspapers would have been foolish not to follow them. As Mathew Ingram wrote for Fortune:

“As tempting as it is to re-imagine history … it’s a virtual certainty that even if most newspapers had focused more of their resources on print and less on digital, the outcome would have been more or less identical … [P]rint newspapers had already been in gradual decline for a decade before the consumer Internet came along, a decline driven primarily by radio and television news.

“All the Internet did was accelerate and enlarge that drop, by siphoning away the attention of newspaper readers, and then the advertising revenue they depended on for their livelihood.”

I am not sure how effective it would be for major papers to go back to print – mainly because the journalistic content is now so much lower.
30 years ago I used read the Fin Rev from front to back. These days I glance through, reading headlines and a couple of articles. Thus repeated access to my printed copy (e.g. reading the rest on the train going home) no longer has value.

A reasonable synopsis. The SMH is quickly diminishing into a third rate rag. Once I stop buying it I won’t be looking online for their content, I’ll just find better product online and sever my relationship with what used to be an august paper of record.

So many good journalists gone by the wayside, particularly in business and economics. Their political coverage has never really recovered from Peter Hartcher’s appointment, hardly worth reading their drivel now.