Essential: Trump second only to ISIS as a threat, Australians say

Australians rate Islamic State as the greatest threat to peace and stability, but the prospect of a Donald Trump presidency is second.

Australians think a Trump presidency would be the second greatest threat to international peace and stability after Islamic State and Islamic radicalisation, this week’s Essential Report shows.

Asked what they believe is the biggest threat, 42% of voters said Islamic State and 21% a Trump presidency. The surprise third greatest threat was “growing level of inequality”, identified by 11%. Coalition voters were more likely to see IS and radicalisation as the biggest threat (53%) and less likely to see Trump as a threat (16%) whereas Greens voters saw Trump as the greatest threat (35%) followed by global warming (20%). 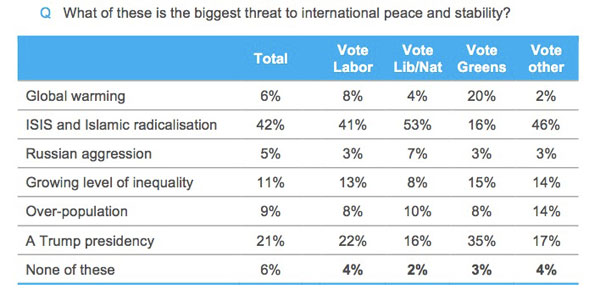 Almost three-quarters of voters believe the threat of terrorism has increased in recent years: 73% say it has, around the same levels as in 2015, although that view ranges from 82% of Coalition voters to 57% of Greens voters. There are also mixed views about measures to respond to perceptions of an increased threat: 81% of voters support preventing dual nationals who are suspected of fighting in Syria from returning to Australia (including 54% who “strongly” support it), and 79% support investing in local programs to help de-radicalise youth. Sixty-four per cent back preventing Australian citizens suspected of fighting in Syria from leaving the country, and there’s also solid, but not majority, support for on-the-ground intervention by Western militaries, including Australia, in Syria (49%). However, 44% support allowing the government to monitor phone calls and data of all citizens, while 43% oppose it.

The government’s campaign to refocus on industrial relations has had some success despite the distraction of the guns issue: support for the re-establishment of the Australian Building and Construction Commission has reached its highest point, with 36% of voters supporting the government’s plan to restore the construction industry attack dog, up from 32% in August; 16% of voters oppose it. Support is strongest among Coalition voters, but more Labor voters support it (26%) than oppose it (23%); only Greens voters oppose it, splitting 22%-33%. There’s also been a small rise in the number of voters who regard the issue as important: 39% rate it as important compared to 35% in August.

The question is whether it is better to smash the broken financial/government system in the US (Trump) or patch it up (Clinton).
Being moderately secure myself I have no particular opinion. It will do Americans no harm to contemplate their faults for another decade.

I wonder how many respondents would be in favour of introducing the ABCC if similar legislation was introduced in THEIR workplace?
Until you become comprehensively informed about how workers will be treated under the ABCC…and why most legal groups DON’T support it…then I’d be careful what you wish for.
You might just be next!!

It will never cease to amaze me that Australians rate ISIL and Islamicist terrorism as the number one threat to world peace. I get they are fed this rubbish all the time but still.