Video of the day: Trump TV

Why watch the news on TV when you can get all of the information Donald Trump wants you to have right there on his Facebook page? It's beautiful. Big league.

There’s been a lot of speculation in the US media about whether Donald Trump, assuming he loses, is gearing up to launch a conservative television channel. He is, after all, being advised by Roger Ailes, formerly the evil mastermind behind Fox News.

But is Trump TV here already? Supporters were able to watch last night’s debate live on Trump’s Facebook page. And this was more than a simple stream of the debate. Before and after, a panel of campaign operatives sat on uncomfortable-looking chairs interviewing notables who had given Trump their endorsement, much like you’d see on a regular cable news channel. Only, you know, more one-sided. While the sound quality left something to be desired, the stream had 160,000 viewers at the height of the debate, and 9 million viewers in total according to Facebook’s dodgy total viewership statistics. 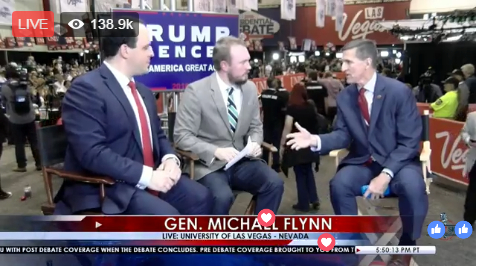 To show some of the balance utterly lacking in candidate media, it seems worth pointing out that Hillary Clinton has also referred supporters to her own media during the debates. During the first two match-ups she referred viewers to HillaryClinton.com for some “fact-checking” of Trump’s statements. — Myriam Robin