Mountains and molehills. To the glee of her Coalition tormentors, Human Rights Commission president Gillian Triggs has been badly caught out in her evidence to the Legal and Constitutional Affairs estimates hearing earlier this week. Having dismissed quotes attributed to her in an interview with Ramona Koval as “out of context” or “put in by a sub-editor”, Triggs has had to reverse herself when the full, taped interview was made available to the media:

“Upon further reflection I accept that the article was an accurate excerpt from a longer interview.”

Blaming the journalist — especially a respected one like Koval — was a shabby look, especially given the interview, or at least the edited version that appeared in The Saturday Paper, was a sympathetic one. There are now calls for Triggs to resign and plans to force her to return to the committee to explain herself. Triggs might hope that the committee opts to treat her in the same way as it treated the Attorney-General’s Department when it misled the committee over its development of data retention plans not once but twice in 2013 and was forced to write to the committee to significantly change its evidence. Nor was the change trivial — AGD, under its then-Secretary Roger Wilkins — had consistently sought to downplay its role in developing data retention legislation, when it was the driving force behind it. So what did the committee do when AGD advised that it had misled the committee? Well, nothing. Triggs should be so lucky.

Joyce, an undoubted good sport, is pissed off at some of the “reporting” from Errol Parker and Clancy Overell, who together have detailed a series of alleged scandals involving the Deputy Prime Minister, from punching on with ex-MP Tony Windsor (“I don’t mind that rumour but it said I came second which is bullshit”) to “rum-fuelled” pub altercations and pants-dropping dance moves. 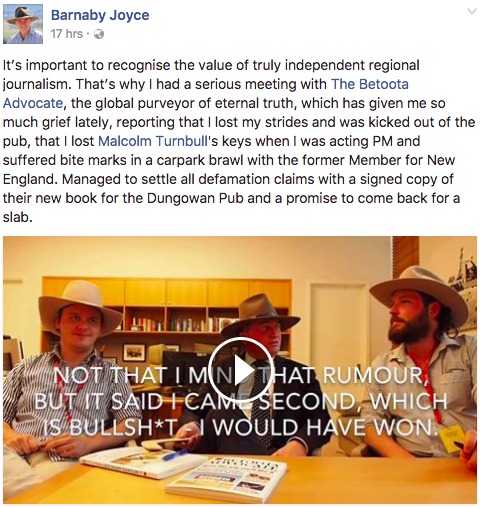 Joyce wrote on Facebook that he agreed to settle all defamation claims after the boys signed their new book and promised to “come back for a slab”. Top blokes, the lot of them.

White paper back on again. After yesterday’s shenanigans over whether there would be a foreign policy white paper or merely a policy strategy document —  DFAT head Frances Adamson said yesterday it was the latter, contradicting a story Foreign Minister Julie Bishop had planted in the media — the white paper was suddenly on. Late yesterday afternoon, presumably after a “WTF?” phone call from Bishop’s office, Adamson reversed herself in her evidence to the Foreign Affairs, Defence and Trade committee — suddenly DFAT was working on a white paper. She had seen media reports (well, that would be Ms Tips’ account) and there was some “confusion”, she said. Confusion, of course, entirely generated by DFAT not having done the basics of checking what the minister’s position was on a likely topic of estimates questions. Hardly an auspicious estimates start for new secretary Adamson.

Literal food fight? You thought it was all over, but Hillary Clinton and Donald Trump will have to face off one more time — and they are supposed to play nice. The Alfred E. Smith Memorial Foundation Dinner in New York is a white-tie gala that, in presidential election years, is a chance for the two candidates to dine together and make self-deprecating jokes. Only Trump is not so good at the self-deprecation, and Clinton, whatever you may say about her, is not known for her humour.

The dinner will be held Thursday night in New York, and it is difficult to imagine that less than 24 hours after Trump called Clinton “a nasty woman” and Clinton called Trump “unfit to be president”, they’ll be happy breaking bread together. New York’s Cardinal Timothy Dolan will be the only buffer between the warring parties, but even Christian charity might not be enough to stop an actual food fight breaking out.

Build the wall … and make it pink. If we’re going to build that damn wall, figured one Mexican architectural firm, let’s at least bring some local flair to it.

Zapopan-based firm Estudio 3.14 gave its interns the task of coming up with a conceptual design to fulfil Donald Trump’s brief of closing the United States’ southern border while celebrating Mexico’s architectural heritage. The hot-pink design, inspired by the buildings of a Pritzker Prize-winning Mexican architect, will “allow the public to imagine the policy proposal in all of its gorgeous perversity”. According to the studio:

“Because the wall has to be beautiful, it has been inspired in by Luis Barragan’s pink walls that are emblematic of Mexico. It also takes advantage of the tradition in architecture of megalomaniac wall building.”

At 3145 kilometres from coast to coast, traversing hills, deserts, rivers and cities, the project could employ up to 6 million people. No word yet on whether Mexico will pay for it.

Ailes doco on the way. A well-known US film maker is looking to make a “limited series” for TV on Roger Ailes, the recently ousted head of Fox News in the US. Leading the project is Tom McCarthy, the man responsible for Spotlight, along with journalists Gabriel Sherman (who wrote an unauthorised biography of Ailes and was a leading reporter on the numerous articles about sexual harassment allegations against Ailes at Fox for New York Magazine) and his wife, Jennifer Stahl.

Deadline.com reports that the series will be based on Sherman’s reporting on Ailes in the bestselling book The Loudest Voice in the Room and at New York Magazine, where Sherman is national affairs editor. McCarthy will be executive produce. Sherman and Stahl will write and co-executive produce. Blumhouse TV will serve as the studio, financing and producing the series.

We wonder if this one will be coming to Foxtel?

If Trump wins maybe both Mexico and Canada will need wall to keep out refugees from the US.