The animal activist group is trying to gain attention on the occasion of the prime minister's 62nd birthday with a thoughtful gift.

It’s Prime Minister Malcolm Turnbull’s 62nd birthday on Monday, and to mark the occasion, animal rights group PETA is giving him a vegan leather jacket. Proclaiming it as Turnbull’s “birthday suit” (for some reason they didn’t mention that actual birthday suits are vegan anyway), the activists are attempting to use the date to draw attention to the evils of wearing leather. It is a well-timed gift, as it’s been a long time since Turnbull was spotted in his leather jacket. Power and responsibility mean it’s all suits now, maybe a polo shirt if he’s out rowing. PETA’s associate director of campaigns Ashley Fruno obviously understands that Turnbull’s fashion choices reflect the stressful job he does, saying “we hope this gift inspires Prime Minister Turnbull to take that dead weight off his shoulders and wear his heart on his sleeve once more”. 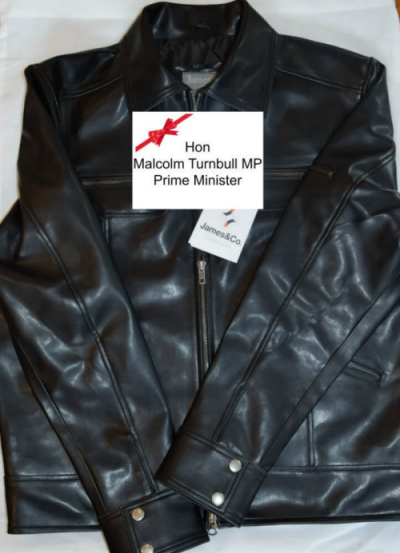