Just what is the Adler shotgun? Why does David Leyonhjelm want it to be legalised? Why do gun control proponents hate it? Crikey intern Rachel Robertson looks at a history of the controversial gun.

The controversial Adler shotgun is in the spotlight after Senator David Leyonhjelm yesterday asked that the Coalition lift the ban on the firearm in exchange for securing his vote on the government’s controversial Australian Building and Construction Commission legislation.

So how dangerous is the Adler shotgun? And what are the arguments for and against it?

Here’s a little pocket-guide on the most talked-about weapon of the week.

What is the Adler shotgun?

The Adler is a lever-action firearm invented in the 1860s, which has been used in Australia for more than 100 years.

It’s big and long and looks like the gun Ned Kelly rides around with in Sidney Nolan’s paintings.

It comes in varying capacities. The five-shot Adler can shoot five rounds without having to be reloaded. It also comes in seven-, eight- and 11-round capacities.

The higher the capacity, the more damage the gun can do in a shorter period of time, without the delay of reloading.

Why is Leyonhjelm a fan of these guns?

Leyonhjelm has fought passionately for gun rights in Australia since being elected into the Senate. He told Crikey he believed personal freedom was of paramount importance.

“Our freedom to live our lives without excessive government interference is more important than public safety for everyone,” he said.

He equates using a gun for leisure or sporting purposes with taking a swim at the beach.

“If public safety is more important than anything else then everything will eventually be banned: cars, knives, swimming — you name it,” he said.

He told ABC Radio National yesterday that gun owners should be treated like any other sportsperson.

“If they [the government] were attacking golfers over their golf clubs, or tennis players over their tennis rackets I’m sure you’d hear a similar anguish,” he said.

One purported benefit of the Adler, raised by both Leyonhjelm and Grant, is that it is especially effective for farmers battling droves of wild pigs.

Why were restrictions placed on the Adler?

In response to the 2014 Martin Place siege in Sydney, the Abbott government placed a prohibition on the importation of Adler shotguns with a shot capacity of five magazines or more.

A statement Crikey received from the Attorney-General’s Department said the government introduced the ban because it was concerned that a significant number of high-capacity, lever-action shotguns were due to be imported into Australia soon.

While the ban on Adler imports was due to expire 12 months after its introduction on August 7, 2015, the government introduced a sunset clause to extend the ban until a review of the NFA was complete.

Have the gun restrictions been effective in curbing violence?

Since the Howard government introduced the NFA there has been a steady decline of firearm-related homicide, according to the Australian Institute of Criminology. 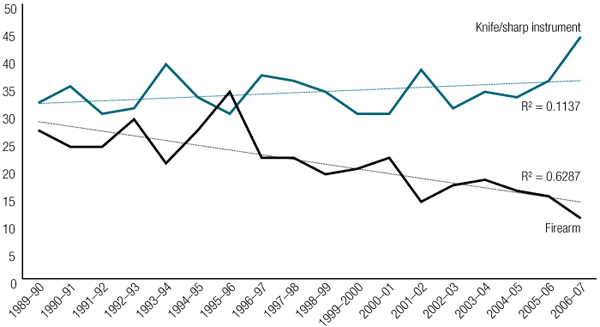 Can you legally buy an Adler shotgun?

Yes, you can import a five-shot Adler. To obtain a licence for the Adler a person must be over 18 years old with no criminal convictions and must be able prove they have a “genuine reason” for wanting it.

Farming, hunting and sport fit the bill; self-defence does not.

Exactly how dangerous is the Adler?

Contrary to advice received from the Australian Crime commission, Leyonhjelm believes the Adler is no more dangerous than any other gun.

However, the five-shot Adler — which can be legally imported — can also be legally modified into the banned eight- or 11-shot Adler.

It only takes about 10 minutes, and tutorials are available online.

Activist group Gun Control Australia says that due to improvement in firearm technology, the Adler is now a faster more lethal weapon than ever.

It’s calling for it to be reclassified from Category A to Category C in the NFA, heightening the level of restriction.

“[It’s] classified along with old-style low-powered hunting shotguns — category A firearm — but in reality the Adler is a modern firearm that looks and operates like a semiautomatic weapon,” he said.

Cause for alarm? Australia has more guns, but they’re less dangerous

Rachel Robertson should have noted that the Adler is a combat gun widely used by authorities such as police, militia etc. It is not a recognized sporting gun, and would not be the choice of professional hunters for game birds or pig shooting, especially as it takes a rifle to stop a pig, deer, roos and so on. Leyonhjelm is being deceptive at best suggesting that the Adler would used for sporting purposes, simply put they kill people.

The issue is rapid fire of a high number of rounds which is only necessary in combat situations.
The Adler is not a sporting gun.
Most large game (pigs , deer, kangaroo etc) hunting involves a rifle not a shottie. Small game, rabbits, foxes, ducks etc, do not need rapid fire guns.
If a legitimate farmer or hunter can’t achieve their aim ( pun intended) without needing to get off eight or eleven rounds in as many seconds, they should not be allowed anywhere near a gun.
Other than military and law enforcement the only use for these weapons is to help gun nuts feel like a hero.

“Exactly how dangerous is the Adler?”
It’s a gun. Its purpose is to shoot and kill people and animals. Shooting people is unlawful and if some people want to shoot animals there are enough guns here already to enable them to do that.

I do not want any more guns imported in to Australia.

Any decent shooter should rarely need more than one shot to kill an animal. Certainly not 5 or 7 or whatever in rapid succession. As others have said, if they would need a gun like that, they need shooting lessons, not a different gun. And, if they can’t shoot accurately, they’re not shooting humanely, a big concern of people who use guns for work and, for the most part, regret any unnecessary killing.
As for shooting for “sport” … a disgusting abhorrence.

If this subject had raised its ugly head at the time of the Martin Place siege there would’ve been no further debate.

Australia has no need of more guns.